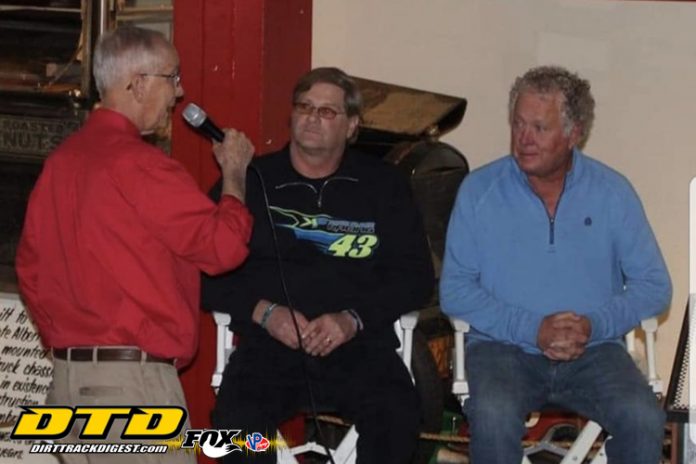 With the Fonda banquet on tap this Saturday, December 7 to close out the 2019 season, Brett Deyo and his staff have been working diligently to get things going for the 2020 season. Already on the 2020 schedule is the annual car show at the ViaPort in Rotterdam on March 27-29. Opening night of racing is April 18, May 9 will bring back the very popular, Dollar Night, May 16 will honor Lou Lazzaro with $4,400 to win for 44 laps, Dave Lape Night is scheduled for May 23 with Twin 22 lap features, on June 27 the USAC East Coast Sprints will make a stop at the historic oval. Returning for the month of July is the Firecracker 50 on July 1 and the Fonda 200 returns on September 17-19 paying $53,000 to win and $1000 to start the 200 lap feature for a line up of 40 big block/small block Modifieds pushing the pay structure to well over $130,000 before any special awards. This past fall, Deyo and his team did an outstanding job putting together a racing event that people are still talking about and it looks as though they plan on doing it again, while upping the ante for 2020.

Lost Speedways took place this past Saturday at the Saratoga Auto Museum and once again those in attendance were not disappointed. The stories that attendees get to hear during this annual special event are ones that you may never get to hear elsewhere. For instance, the reason that one of the featured drivers, Dickie Larkin went to racing at Lebanon Valley was because he had lost his driver’s license, (he didn’t say why). When he finally won his first championship at the Valley, then Pit Steward, Marty Beberwyk, dared him to say something to owner/promoter Howard Commander when he was presented with the trophy and Dickie took the dare and said to Howard, “When I first met you, you had a little hair, then you had none and now you have a full head of hair.” Even though sponsorship on Larkin’s car named Budweiser and Village Variety Store, leading people to think it was big money, it was actually a local store and local beer distributor. Something that is pretty common in local racing. Even though, the other featured driver, John Flach’s father, John Sr., was a champion racer at Lebanon Valley, John, Jr., was too young to know about all that, but living within 20 minutes of two of the Oak Hill Ridge Runners, Stanley Wetmore and Lou Searing he grew up around racing. Now John said it seems strange that he’s back in the sport racing against Stanley Wetmore after all these years. John had very kind words and praise for Laurie Fallis and what she has be able to accomplish this past season with the vintage racers. When event organizer, Ron Hedger asked Flach if he was interested in returning to regular Saturday night racing he said, “No, I am very happy racing the vintage car at all the area speedways.”

As far as both drivers are concerned, something needs to be done about the cost of motors in Modified racing, because everyone can’t afford $50,000 motors.

There was also a segment on racing at the Altamont Fairgrounds. The fairgrounds went through many era’s of racing from 1920 to 1950. A total of 49 auto races were held at the fairgrounds between 1926 through 1954. Fair records from 1910 showed there was a five mile auto race on the horse track during the Albany County Fair and the local newspaper covered the 4000 poultry birds and two days of harness racing with no mention of auto racing. NESCOT has come up with a new fundraiser to take the place of their vintage calendars they sold the past few years and they were on hand to kick off the “NESCOT Month of May Lottery Raffle”. For $10.00 each the buyer has a chance at winning money when your number matches the New York State Lottery daily evening number during the month of May 2020. So for just $10. 00 you get 31 chances to win money. Monday and Friday pay $100 and all other days pay $25. Call Rich Carpinello for a ticket (518) 477-8352.

The annual Gobbler race at Accord Speedway went off without a hitch this past Saturday and Andy Bachetti of Sheffield, Mass. , was the winner.