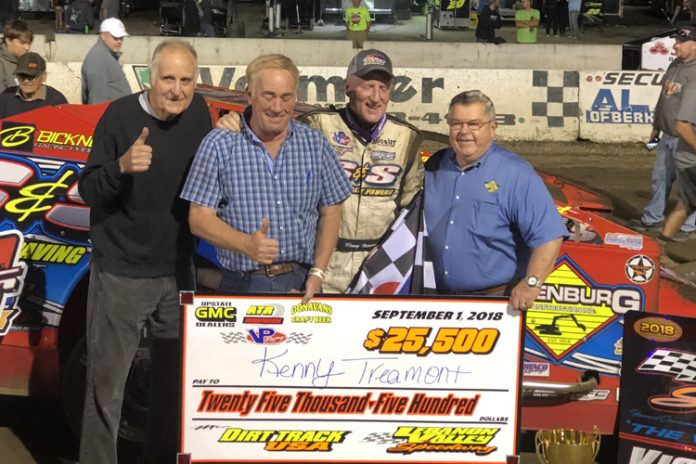 Ken Tremont, Sr., will be honored by the Living Legends of Auto Racing (LLOAR) in Florida    in February with the Saturday Night Hero award.  The award honors service and accomplishments over a racing career to preserve the history of racing.  Ed has the honor of being the presenter for Ken on this special night.

The LLOAR was founded in 1993 in an effort to recognize, honor and promote the pioneers of beach racing and stock car racing.  The all-volunteer, non-profit organization currently has over 500 members from all over the world.

Living only one half mile from Burden Lake Speedway in Sand Lake, at the age of nine, Ken, Sr., began selling soda at the track on race day.  Even then he was known for good attendance, missing only two events the entire time the track operated.

At the age of 12, Ken built his first race car, a soap box derby car, the No. 122. The family trademark No. 115 came about when Ken appeared at a track later in his career with a car with a No. 15 on it and he was told that number was already taken.  He added a number one and the rest is history. When Lebanon Valley Speedway opened in 1953, Ken was there.  His first car at Lebanon Valley was with partner, John Harvey, a blue, 1955 Ford, No. 115.  He has been there ever since.  He’s been at Lebanon Valley for seven decades but the unbelievable record is his perfect attendance at every event ever run at the track. You could say he’s part of the foundation of the high banks.  He’s served on the Board of Directors at Lebanon Valley and pretty much anything or anybody he’s asked to help in racing, he’s there. Throughout his career Ken, known as “Abe” to the racing community, has had many drivers behind the wheel of the No. 115 with moderate success, but it wasn’t until his son, Ken, Jr., took the wheel that the Tremont’s began to experience victory lane and championships on a regular basis.

Ken Tremont, Sr., built the engines that powered the No. 115s for many years and in 1999 his son Ken, Jr., won the most prestigious event in Modified dirt car racing, the Eckert 300 at Super Dirt Week at the New York State Fairgrounds with a car powered by a Tremont engine.  Ken, Sr., was honored the following year at the Dirt Motorsports Hall of Fame with the Mechanic of the Year award.  In 1970, Ken was one of the first members of the Lebanon Valley Hall of Fame, he was inducted into the New York State Stock Car Association Hall of Fame in 1989 and in 2018 Ken was the only non-New Englander inducted into the New England Auto Racers Hall of Fame that year by N.E.A.R. honored as the all-time greatest car owner and engine builder at Devi’s Bowl Speedway in Vermont. Ken Tremont, Sr. “Abe” is still active in racing today with his son, Kenny and grandson, Montgomery both behind the wheel of a Tremont, No. 115.

The Living Legends have several special events during Speed Weeks and if you are in the Daytona area check out the schedule at their museum at the Sunshine Mall in South Daytona or on their webpage, www.livinglegendsofautoracing.com, under news and events.

Until next time we say so long from sunny Florida.  Please send all news and/or comments to biittig@yahoo.com