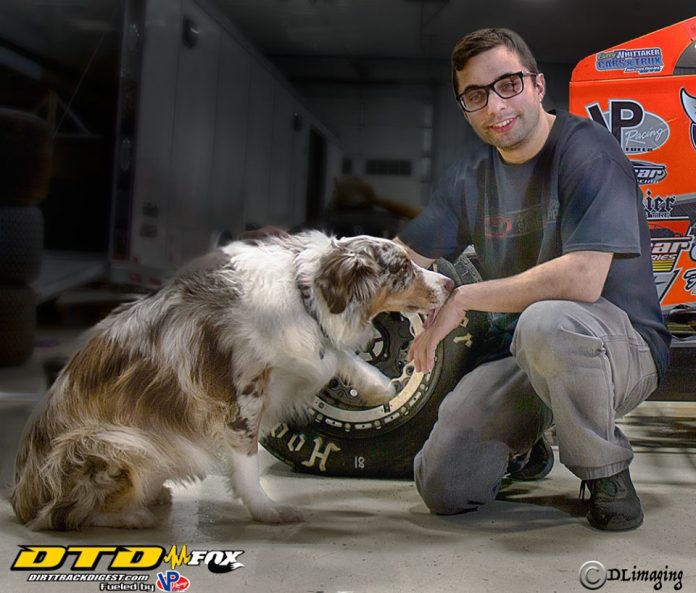 Coming off the heels of the best season of his racing career, Mike Maresca is gearing up for another race-packed season, which gets underway in early February at Volusia Speedway Park.

February’s event will be just the start of what is shaping up to be another busy season for the now 24-year-old driver. Last season for this young Potsdam, N.Y., driver, ended with six wins along with 29 top-five finishes.

The biggest success came when Mike won the covenanted Outlaw 200 at Fulton Speedway. Not only is this one of the most sought after trophies, it is also one of the hardest races to win.

Mike explained, “I never thought I would win that race or be able to execute well enough against some of the best drivers on dirt. It was a cool day for sure. I guess you always go to a race expecting to win, but I just had one of those perfect days drivers strive for. It was such a gratifying experience because I had some pretty low moments early in 2019, but after winning the 200, everyone was super proud of what we had done.” As we move into 2020, Mohawk International Raceway will once again be the home track for Mike and the No. 7 team with sponsorship coming from by St. Lawrence Radiology and Twin Leaf Express.

Mike is set to also compete at the Fonda Speedway weekly, a tough track to race as there are some really good racers there such as Stewart Friesen, Bobby and Danny Varin, and track champion, Rocky Warner, just to mention a few. Racing weekly at Fonda will certainly add to his skills, as this track is fast and racey.

“Fonda is a get it on place,” stated Maresca.  “You have to race really hard for all 30 laps too, so it makes for a better racer. I think it is good to race on different tires and a motor as it gives you a wider aspect of racing, plus the payout is great at Fonda compared to other tracks.”

The 2020 season will see Mike and his team race over 40 events at Mohawk and Fonda alone, plus there will be a large number of special shows along with the fall schedule of races.  This will be a real work out for the team this season.

“It’s going to be a busy season for us racing weekly at Mohawk and Fonda,” commented Maresca.  “We will also race at Cornwall, but not every week. I will also race some of the bigger shows over the season as well. We may even go back to race at St-Guillaume Super Speedway if the opportunity arises, as I really enjoyed racing there last season. Then there are all the fall events as the season winds down.  So, yes, 2020 will test our team for sure.”

One of Mike’s goals will be to challenge for the championship at Mohawk International Raceway. Last season the team fell shy of the championship by only 12 points to fellow racer Chris Raabe.

“It will not be an easy run towards my goal this season as there are several good drivers racing at Mohawk,” mentioned Maresca.  “The likes of Willix, Jackson, and Madison Mulder, just to mention a few, all could win at any given night, but Chris Raabe will be the one to bet on. Chris is a good driver and has won the championship at Mohawk numerous times, so he will definitely a tough to win over.”

Is it time for Mike to achieve his goal of a championship? Mike has put in the years of hard work, racing at every track imaginable. From Sportsman to Late Models onto big-block Modifieds, Mike has honed his skills along the way.  Yes this could be the year where everything falls into place.