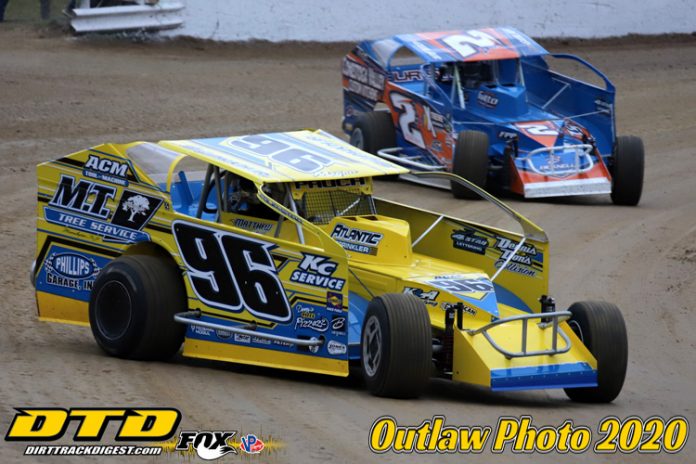 After a successful practice session that saw 41 Modifieds and around 30 Sportsman on Wednesday night an elite field was set to kick off the Short Track Super Series, Brett Deyo promoted, “Sunshine Series” on Thursday night at All-Tech Speedway.

It was just one of those days where you knew “it just wasn’t going to happen,” but the stick-to-itness of Deyo and track officials was quite evident.

The fresh dirt from the recently plowed watermelon field next door was filling the air as was the sand in the pits due to strong gale force winds that simply wouldn’t subside.

Finally the inevitable rain came and after teasingly letting up the sky opened up once again and it rained for several more hours with several inches of rain soaking the entire area of Northwestern Florida.

As the evening evolved tornado warnings continued and thus the stage was set for a unique Modified season opener.

The driver’s meeting was interesting to say the least as Deyo knew the fans wouldn’t be exactly packing the seats on a night like this. He said to the gathered pit gallery, “You might be the only witnesses to this tonight.”

However, in the end fans could be treated to something extremely special on Friday.

Heats drawn on Thursday will remain intact and once again the draw simply creates some prelim fields that wouldn’t be seen elsewhere. The draw pits stars against stars in some races while others are comprised of guys who are weekend runners. However, they are all pretty interesting

The only car towed off during hot laps was Rusty Smith and he told Dirt Track Digest, “After working on the car for eight hours today to get the car to roll over to get into the track, it worked a little too good and the body roll hit the left rear tire and cut it down.”

He said, “Basically it was a self induced flat tire.”

Looking at the third heat and you just shake your head and can’t imagine how this will evolve with a front row of Peter Britten and “The Doctor” Danny Johnson while lined up behind will be Brandon Grosso, Kyle Coffey, Larry Wight, Mat Williamson, Billy Pauch Jr., Erick Rudolph, Rick Laubauch and Nick Mady.

Justin Haers was scheduled to race, but his car owner Jake Marine passed away on Wednesday.

Thirty-one Sportsman will vie in three heats and the fast time on Wednesday was 15 year old Payton Talbot.

The Sportsman field has a mix of guys who have run American Racers full time as well as a few Hoosier runner who are catching up.

Well, not much to write about for what was hoped to be day one for the ‘’Sunshine Series”, but rest certain there will be plenty to put on the DTD site on Friday night and early Saturday morning.