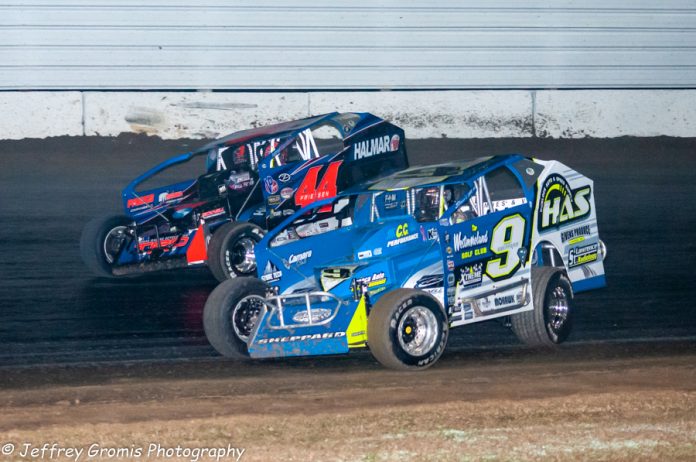 At 9:52 p.m. on Friday night it was the beginning of the second full show of the night at All-Tech Raceway for the Sunshine Swing.

A new track greeted the Modifieds as they hit the track and the norm was continued swapping of positions and see-saw battled.

The most eventful prelim was heat number one where heat winner Anthony Perrego started eleventh, gained the lead, suffered a flat tire, went to the rear, rallied and won.

Justin Haers started on the pole, but dropped back a bit after the first several laps. He was coming back strong when he went to the outside and tire-to-tire contact with another car sent him slamming sideways into the front stretch wall. The front end was dangling from the tow truck as the rear-end also sustained extensive damage. Fortunately, he appeared okay from the rough ride.

In the end it was Perrego, Billy Van Pelt and “The Doctor” getting draw spots while Jordan Watson and Darren Smith earned a berth in the main-event.

Mat Williamson simply ran away after starting fifth. The interesting battle was shaping up between David Schilling and Rich Laubach as they earned draw spots in heat two. Also in the main were Billy Pauch Jr. and Rusty Smith.

A front row of pole sitter Matt Sheppard and Larry Wight set the stage for heat three. This one turned out to be a no contest as Wight grabbed the lead at the start and was gone. Sheppard and Kyle Weiss headed for the draw while Kyle Coffey and Dan Hieber made the feature.

Heat four saw a tangle at the start as Nick Mady collected Billy Decker and the late arriving Tyler Siri. For Mady, it was the second body bending event of the night, but Decker resumed near the back of the field.

While Billy Dunn, Brandon Grosso and Stewart Friesen easily garnered the draw spots and Mike Gular along with Dillon Grover gained the spots for the feature, Decker was doing everything in his power to get Grover. With a couple laps to go the two nearly collected one another between one and two, but they escaped.

Filling the fields from two consolation events were Peter Britten, Demetrios Drellosand J.R. Hurlbut one-two-three in consi one while the second one was relatively loaded with the likes of Billy Decker, Erick Rudolph, Andy Bachetti, Jeremy Smith, Darwin Greene and others.

Greene had some difficulties, pitted and went to the rear, but at the final checker the cream had risen to the top with Rudolph, Decker and Bachetti completing the final feature field of the night.

The draw favored the hot guns as the first two rows included pole sitter Matt Sheppard with Billy Dunn on the outside while right behind locked and loaded were Stewart Friesen and Larry Wight.

Even before the green down in turn four there was Demitrios Drellos tucked underneath the rear end of Peter Brittan for yellow number one after Danny Hieber apparently didn’t fire thus, locking up those behind.

Dunn just took off, but eventually Williamson was in front prior to the halfway point. While attention was turned up front the Behrent owned machined was coming strong. Mat made a strong move with momentum building on the back straight and led by the front stretch.

Yellow came out again as the field still hadn’t reached the halfway point as teenager Alex Yankowski had smoke coming from the rear of his car from the very beginning of the race, but it appeared to grenade on the back stretch thus knocking him out.

Wight, who started strong, but faded a bit had pitted only to come back out at the tail end of the field and regroup.

At halfway Williamson appeared in pretty good shape, but Friesen was second followed by Anthony Perrego, Sheppard and Dunn.

It was amazing to watch the Mods just dart all over the place. You never knew (and wondered if some of the drivers knew) where they were going next. The track had a personality all to itself and some pre-race thoughts of how the surface would play out proved wrong. Remember no one had any notes on this place and it was simply racing by the seat of their pants.

Last in the race Dunn was going under Billy Pauch as they were battling for a top ten spot and contact was made. They pushed up and poor J.R. Hurlburt got dinged and sent into the concrete between three and four thus ending his night.

It was that way as there were numerous innocent bystanders throughout the night as there was plenty of collateral damage.

Friesen surprised Williamson and he went on to the win bringing his night earnings to $12,500.

Perrego chased Sheppard in the waning laps and on the final circuit shuffled the defending STSS champ to fourth.

Erick Rudolph came out of a consi and he just seemed to find the right spots, picked his way from far back in the field for a solid fifth place finish. It was a spectacular drive to watch.

Pauch was sixth while Dunn, who has started both features strong only to see the car go away late, settled for seventh.

Andy Bachetti looked horrible in his heat, regrouped for the consi and ended up ninth while Peter Brittan rounded out the top ten.

Wight, who had pitted, salvaged and eleventh while Demetrios Drellos was behind him to complete the top 12. Drellos indicated he really didn’t know what to expect as he is totally unaccustomed to American Racers, but he qualified for both feature events.

Drellos has had a busy week as the drive shaft of his car broke in practice on Wednesday thus giving him minimal track time.

Scott Hitchens, who is done for the weekend with motor issues, indicated he was looking forward to the weekend as he was running coils for the first time.

Thus far the All-Tech Sunshine Swing has been a unique experience because seldom do you have a field of drivers who are all running a track for the first time. There are no notes, reading the track has been uncertain and the action has been jaw dropping.