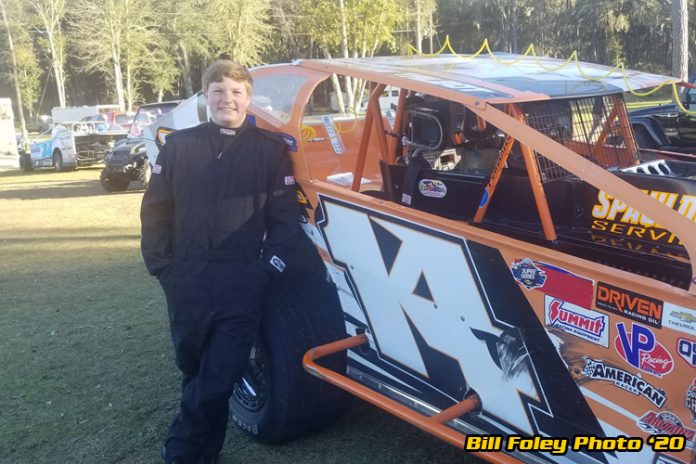 Talbot was the quick timer among nearly 30 cars as he surprised not only the competition, but also himself.

Reflecting on fast time he said, “The track was pretty fast and it was the first time I’ve ever run with this group and the first time I’ve ever had American Racers on the car. I feel I’ve gained a lot of experience on iRacing and I’ve been on several different tracks last year and from watching where the Modified drivers are running. I just learned more and more.”

The sophomore from GMU at Gilbertsville, N.Y., he is anxiously looking forward to his venture at All-Tech.

He said, ”As far as tires are concerned there is a difference, but I don’t really find it that noticeable.”

“I would like to win one of the races. Isn’t that why you come down here? It is a big dream, but this whole thing of driving a Crate is a big dream. A lot of kids never get this type of opportunity.”

After driving dirt go karts for six years, Talbot hopped into the Sportsman last year and noted, “I have to thank Mike Walton, Mason and Charlie Tibbetts for getting us fast right out of the box, both at home and down here.”

This year he plans to run at Malta, Utica-Rome and sporadically at Fulton along with the Sportsmen Series.

Talbot’s Friday ended up with 10th place effort in the first main and a 14th in the second feature with one more to come on Saturday night.