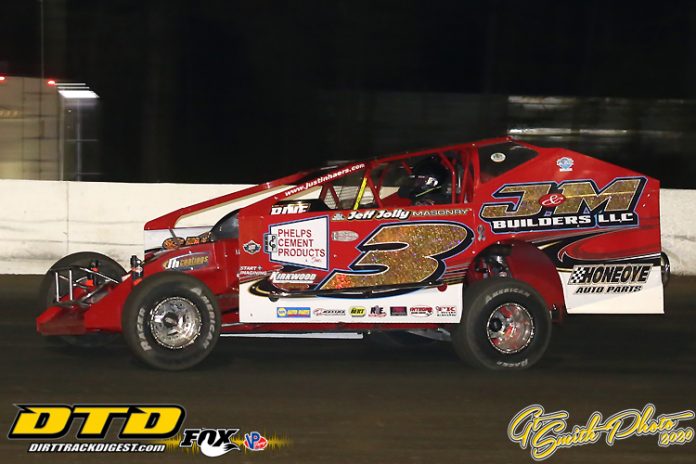 If you have never seen a driver “drive his heart out” you definitely saw it at All-Tech Raceway on Friday night in the first Modified consolation of the night.

Justin Haers arrived on Friday and thus, because of missing the rained out draw he was relegated to the rear of his qualifying heat.

Haers finished ninth in the qualifying heat and earned the eighth starting spot in the first consi.

Jake Marine, who had done so much for Justin in recent years, had passed away on Wednesday after being stricken ill pit-side and with a heavy heart the night was dedicated to Jake Marine.

The consi came out and he went from eighth to fourth on the first lap and then went in pursuit of a qualifying top three spot. He picked up tick after tick. On the last lap entering one he went for broke going inside of Mike Gular entering turn one. It didn’t work and it appeared he had simply lost too much momentum. However, he simply laid on it and coming off four dove under Gular and at the line came up just a tick out of the feature field.

It was evident that this one was for Jake and Justin really, really wanted to fight his way in.

This sport certainly can be cruel.

Stewart Friesen surrendered the lead to Larry Wight just before the halfway point, but retook the lead a short time later as he was given the outside lane to refire. He took over and then on a very late restart with just laps to go he snookered the field and it was his to win.

It was the first ever All-Tech Raceway Modified event and “Mr. Freeze” did it on a freezing night.

Mat Williamson used a late race restart with less than four laps to go to get to second and Matt Sheppard finished third.

Sheppard had drawn ninth on the grid and on lap two he was already up to fifth. He used the restart with four laps to go to get to third.

Billy Decker was probably one of the fastest cars all weekend, but he started back in 14th. It was a show to watch as he chased down Wight through the closing stages to settled for a hard driven, well deserved fifth place.

Billy Dunn was third at the halfway point, but got shuffled on a restart and eventually settled for sixth.

Pauch came out of the consi, started 21st, and worked his way through.

Rusty Smith had a tough break as he went into turn three in 11th on the last lap, but in what was an apparent mechanical woe saw David Schilling, Dan Hieber and Andy Bachetti pass him before they hit the finish line.

Ryan Krachun is done for the weekend as he told DTD, “A car drove over my front end and I did further front end damage when I hit the wall and that turned me around sending the rear end into the wall. The car is done.”

Scott Hitchens crew told DTD that they felt a head gasket caused their problems, but they were concerned with the powerplant. Hitchens noted earlier in the night that the big-block program was sidetracked last year when he lost his engine at Volusia. Part of the problem could have been caused by a fire suppression system that inadvertently went off in the engine. This was the same engine as they said, “we just got it back.”

Scott will finish the weekend in his crate. He started the crate in the Mod feature, but dropped out very early.

Mike Gular, who edged out Haers to get into the main, was out on the pre-feature laps. The crew told DTD they were a victim of “electrical issues” and were never able to start the main.

Coming out of the consolations were winners Billy Pauch Jr. and Jordan Watson along with runners up Erik Rudolph and Demitrios Drellos and third place finishers Rich Laubach and Mike Gular.

Scott Hitchens was the lone driver racing in both divisions and qualified for both main events. However, a plume of smoke followed the 65 to the pits after it crossed the scales and the crew went in search of the problem.

Billy Decker was quick time in practice sessions on Thursday and Friday, but it meant nothing as the line up was the “luck” or “unluck” of the draw. He worked his tail off starting back in ninth and battled his way to fourth to just miss the draw.

Tyler Siri was announced to be starting heats and consi, but the car remained parked outside the hauler. Siri was on a delayed flight and was eventually scheduled to arrive in Orlando at around 5 o’clock. Hope was that he might make the second show.

Anthony Perrago put on a show from deep in his heat field to eventually come home with a fourth.

Stetson University football player Darren Smith bounced off the wall between three and four and even got some air time. He fell far back and eventually finished fifth. The consi saw him get chewed up on a late restart and he didn’t make the show. Smith does not get any purse money in order to maintain his athletic amateur status.

Mat Williamson put on a show as he went from fifth to third on a heat restart and eventually passed Larry Wight for second.

Teen Alex Yankowski came home second to Grover in his heat for a draw position.

Jeremy Smith brought four cars to All-Tech and earned a draw spot with a third in heat four. Finishing behind him in a Smith car was Billy Decker.