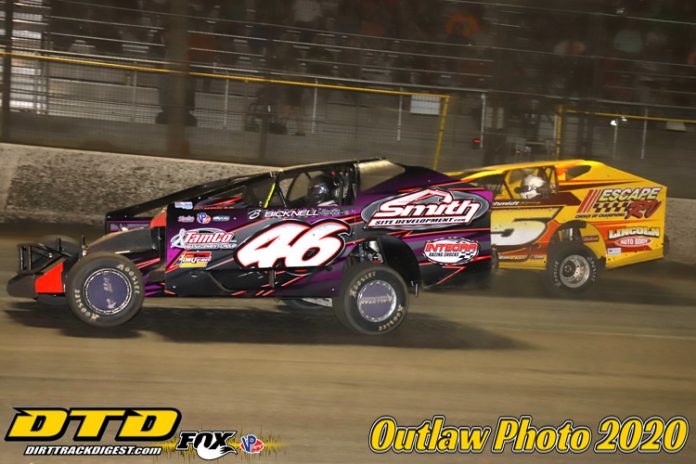 All-Tech Raceway officially kicked off the 2020 Modified season with a trio of shows last weekend and now many of those drivers have either headed home or added five more events to their schedules at Volusia.

Okay, so I’m a Modified snob. Volusia is interesting because it is a mix of emotions. The Mods are the fastest they will be all year, it is a festival type atmosphere and it is really special to see Mods run in February when I know that the North is snow covered.

However, what irritates me is something that will never change. I watched the Mods pack, as Mat Williamson said, “One of the wettest race tracks I have ever been on.”

They packed for a long time. It is just the way it is.

I don’t hear complaints from the drivers or teams, but I’m sure there are a few grumblings, and rightfully so.

It is difficult that Mods run up North or in the Mid-Atlantic States and they are the featured class. Glenn Donnelly did away with the Mods packing the tracks decades ago.

Oh well, I’ve vented and there is no doubt I am in racing heaven here at Volusia this week.

Tuesday night’s feature was much better than anyone could have anticipated. The heat winners filled the first two rows.

Erick Rudolph started ninth and moved quickly to second. A moved on lap seven saw Rudolph in fourth, but he got both Sheppard and Perrego.

Watching Larry Wight and Stewart Friesen in the closing stages in the battle for fourth was simply fun to watch. They swapped positions over and over again before Friesen got third.

Friesen indicated he hadn’t had much time with the car he was running and it was tight. Coming from deep in the field to the top five was satisfactory.

Wight was philosophical about the whole thing as he indicated his car was tight too and there was a good base to work from for the rest of the week.

Demetrious Drellos qualified for every feature at All-Tech, but when he unloaded his Big Block on Tuesday things just didn’t go as well as he started out with fuel issues, changed the carburetor then the fuel pump and regulator. Then the master cylinder went south. He’s regrouping.

Oswego Supermodified Classic Winner Tyler Thompson had motor problems all night long and eventually just parked it. Car owner Jason Simmons told me on Wednesday morning, “Intake gaskets were bad and we are having a hard time finding them. It’s looking like if it works out we will be using one of Larry Wight’s motors.”

Jeremy Smith is having a major change of racing plans for the upcoming season and he told DTD, “We will be running at Brewerton on Friday and at Thunder Mountain on Saturday.”

He will also be following some tours, most likely the STSS North and probably hit a few SDS tour races.

He likes Volusia and noted, “It’s fun to race here and I would like to make a couple of top tens. I have a business here (in Tavares) and lots of family down here so it’s a fun time”.

Pat Ward had a huge smile on his face as he came home ninth from 16th starting spot. The 42p is a new car and motor this year. Prior to racing action Pat said, “This a new car, but the body panels are old as I don’t want to bend up the new ones yet.”

Billy Decker was fast timer, but finished second in his heat relegating him to eight starting spot. He did finish in sixth as the Gypsum team went fifth, sixth and ninth.

Andy Bachetti was sitting on the back of the trailer as the night ended and simply noted,

“We were fortunate not to have any damage in that oil fire in our heat. We really weren’t going anywhere in the feature.” So he parked it to race another night.

Tim McCreadie picked a great night to win as many Northern Modified fans will always be loyal to the former Watertown based driver. A new team in 2020 has been pretty darn good for TMac and hopefully the Mods will be the second feature from time to time this week so I have an opportunity to watch McCreadie in action.