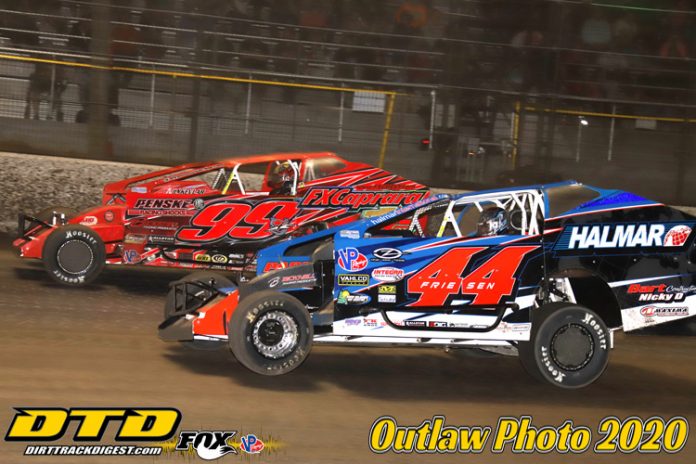 Williamson walked away from the Sunshine State in 2019 and wondered by he was allowed to keep his ride.

He said, “Last year I was bad and on a one to ten with ten being the worst I was probably a nine. I wasn’t doing half of what I should have been doing as a driver. I was not good. The team was clicking, but I just didn’t do the job. I thought Buzz would fire me.”

Well, there were no “firing” thoughts in the pits as he celebrated the latest win.

Mat said, “It was a good night. The heat race was a go as I knew we had a shot at the pole. There wasn’t a draw and it was all heat winners up front.”

He took off and caught traffic, but wasn’t clearing it quickly. Explaining the strategy, Mat said, “I wanted to keep my nose clean and I was hesitant. You are here for Saturday.”

For Williamson it wasn’t as easy at it might appeared as he noted, “Erick (Rudolph) snookered me that one time and in fact he had me. That caution came and sometimes luck helps.”

Rudolph was philosophical about the runner-up position as on the restart when he appeared ready to challenge, Erick said, “I had a good restart, but just wasn’t good enough. I went after him hot and heavy, but after that I was running the same speed as he was and he was just better. It is the best finish I’ve had here and I am really looking forward to the rest of the week. I feel we have a good car, good engine and good team. I also feel we have the setup we need.”

Third place Anthony Perrego threatened to pick up the win as he stayed close to the top two.

Reflecting on the race, he said, “We were okay. We had the fast time in practice, but fell off for our time trial. I’m happy with a top three considering the two cars ahead of me. I was disappointed in that I let Erick sneak by me on the bottom. The car was tight, but it got better as the race went on.”

Fourth place Stewart Friesen finished fifth in his heat, started 19th on the field and still clawed his way to a decent finish.

Friesen said, “The car was just too tight in qualifying. It was a learning night for us with this car. We had a good feature as we went from 19th to fourth. The bottom was good at first tonight, but after that I tried some different things.”

The top five was completed with Larry Wight.

Larry and Friesen ran numerous laps with the 99L hugging the bottom and the 44 running the top side. This went on lap after lap before Friesen was able to cement fourth.

Wight said, “The car was just too tight tonight. I really feel this has given us a good base. We started tenth and had made changes before the feature. We went forward and are ready for the rest of the week.”