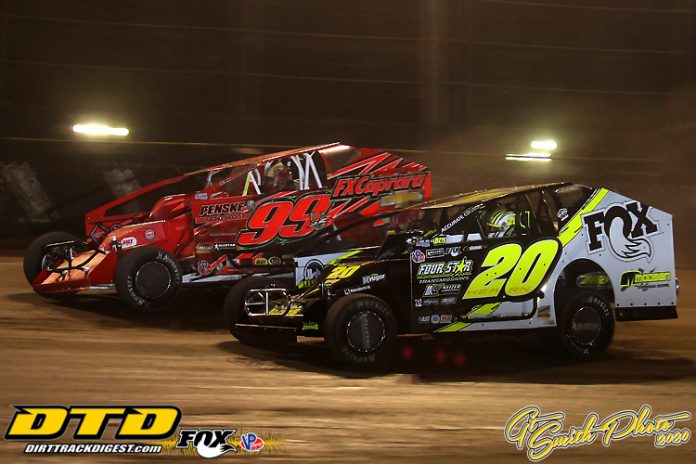 Larry Wight picked up a little gator while his daughter Audrey was able to hug her green stuffed gator as the duo celebrated in victory lane on Wednesday night at Volusia Speedway Park.

The Phoenix, N.Y., driver indicated after the fifth place finish on night one that they felt they had a solid base to work with.

Starting on the front row alongside the legendary Brett Hearn, Wight took over, and though challenged by Stewart Friesen on restarts and seeing the 44 on his bumper in the waning laps, it was win number one for 2020 by .0734 of a second win.

While Friesen was hampered by the rubbering up track in the closing stages, third place Mat Williamson felt that track conditions helped him gain on the lead duo. He started eighth and by lap 12 had worked his way up to third. He was moving.

Hearn missed the podium, but settled for fourth and Billy Dunn brought the Ray Graham No. 49 home to complete the top five.

For Erick Rudolph it was a rare night of being unable to make ground. He started sixth, got to fifth, and finished sixth. It was one of the few times in the past couple of weeks he didn’t gain substantially.

Billy Decker has passed so many cars in the past two weeks, but doesn’t have what he deserves. He started back in 14th and got to seventh on the tenth lap only to stay there for the remainder of the race.

Anthony Perrego started eighth, fell back to tenth at one point, and bounced back to finish in his starting position.

Andy Bachetti was fast all night long, but come feature time he started in a solid fifth, was shuffled to ninth around lap 12 and that is where he finished.

Peter Britten picked up one spot as he went from 11th to tenth.

There were drivers with difficulty.

Justin Haers appeared to be beginning to move up, but suffered a flat, pitted and returned.

Dillon Steuer brought out the yellow early as he slowed on the track after contact caused significant damage to the right side of his car.

Matt Stangle took a hard hit off the second turn and rode the outside wall.

He told DTD, “The damage wasn’t too bad…the front end and a few other things, but the car just got tight and I got up in the loose stuff.”

Matt Sheppard pitted on lap sixth with an apparent front end problem. He failed to recover and finished a disappointing 19th.

Billy Pauch appeared to be working quite well early in the night, but in the main after starting seventh he settled for 11th.

Jimmy Phelps appeared to have a quick car in his qualifying heat and was much improved over the night before. Jimmy noted before the action that he had to get accustomed to Volusia as he hadn’t been here in a while. He’s confident with what he has brought to the table, but after starting 13th he had to settle for what probably was a disappointing 18th.

Coming off several mechanical issues Demetrios Drellos got in the field for the first time this week.

Rick Laubach was fast and appeared to be a threat. However, he was a DNF dropping out on the 19th lap. Rick told DTD,”The right rear was going flat.”

Provisionals from first night points were Steuer, Maresca and Dave “The Big Show” Rauscher after Stangle was unable to make the starting grid.

Just a couple of hours before the gates opened a Larry Wight engine was placed in the 98T of Tyler Thompson. Scott Jeffery, Larry Wight, Brandon Ford, Jack Petrowicz along with Jason Simmons and others from his team were making the final adjustments. Thompson told DTD that his own motor “had a leak around the intake.”

Pat Ward hauled his 42p south in a regular white enclosed trailer. Pat said, “They are thinking of selling the one we’ve been using as it is pretty old.

Rich Sgalotta was back in the pits after a serious shoulder injury. He didn’t qualify on opening night, but his times improved every lap in time trials on night two.

Max McLaughlin will be doing some asphalt Modified racing as well as Midgets and possibly some dirt mod racing.

There were 51 Late Models and 35 Mods in the house. Overall three more LM than last night and one less Mod as “The Doctor” lost an engine.

Tim McCreadie beat Jonathan Davenport in his heat by just .069 of a second.  Dennis Erb Jr., won the Late Model main, but was knocked off the podium due to not reporting to tech. McCreadie finished seventh on the night.

Well, on to night three.