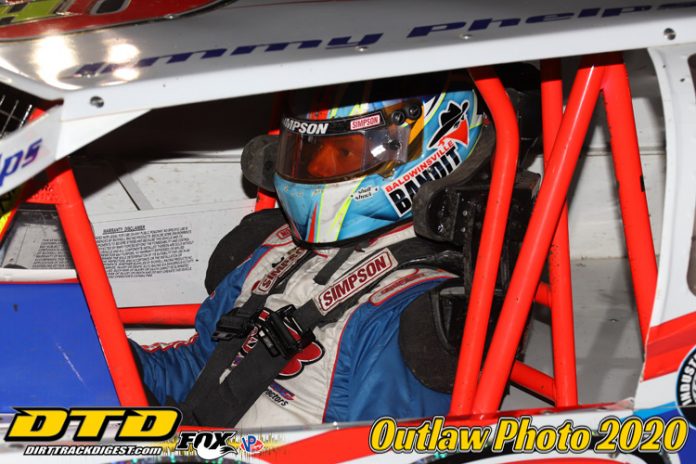 Jimmy Phelps has had some good moments and some not so good ones in the first two nights at the DIRTcar Nationals at Volusia Speedway Park.

Prior to action on Tuesday night, Jimmy talked to Dirt Track Digest about not only racing here in the Sunshine State, but he also put on his promoter hat to share his excitement over the upcoming season at Weedsport Speedway.

On track action the first night got off to a good, but then a bit rougher start.

He said, “There was some miscommunication and we just didn’t do what we felt we could have done. Things like this happen, so we’ll move on.”

On racing at Volusia, Jimmy said, “I guess you have to train to race here. I haven’t been here in a couple of years. At Volusia qualifying is really the key and you have to get in position early or catch breaks.”

Of the first night he said, “We had decent speed and qualified fourth and I felt we were in the hunt.”

He timed fourth in his group on night number two and brought his car home fourth behind Mat Williamson, Billy Dunn and Anthony Perrego.

The car Jimmy is running here is the Bicknell he brought to Charlotte and Orange County at the end of the season.

Turning to Weedsport Speedway he said, “The program is looking good for 2020. I think we will benefit from the American Flat Track Series on the Fourth of July and we’ve had weather problems with the World of Outlaws, but this year I am excited that we have them in August.”

Continuing he said, “We have the two day show the weekend after Labor Day so once again I hope we will have better weather. Currently, we are planning all sorts of events and activities that weekend.”

So the week will continue and Phelps doesn’t have to worry about being a promoter-driver, but simply a driver.