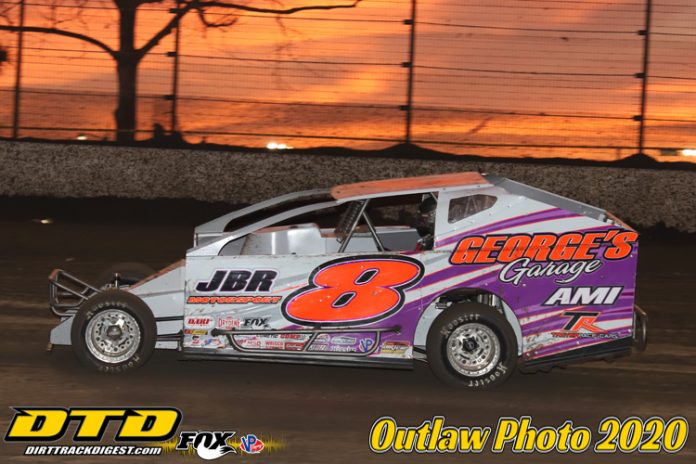 Rich Scagliotta is restarting his racing career here at the DIRTcar Nationals at Volusia Speedway Park.

In the first two nights Rich hasn’t been able to get into the feature field, but he has improved each night.

Talking to Dirt Track Digest he said, “I am out of shape.”

He was out of action most of last year and explained, “I flipped last year at Albany-Saratoga and hurt my right shoulder doing rotator cuff damage. I had work in the way and physical therapy, so I think I made the right choice. I think the shoulder harness came loose.”

Of his first night in Florida he said, “I simply don’t bounce around like I used to. It kept me in shape and after racing last night (Tuesday), I was tired.  Not the go to sleep tired, but exhausted. I was worn out. I guess the older you are, the harder it is to come back from an injury.”

On the track he said, “I was happy to have to good laps, but the rest of the way I was just in the wrong place on the track. Position here is a monster.”

Rich has been racing since 1998 and plans to keep going as he explained, “I started racing Sportsman in 1998 at New Egypt and started running the series in ‘08. I really missed racing, the people and the tracks when I was forced to sit out last year, but I don’t miss the ride.”

From New Jersey it is a four-and-a-half-hour jaunt to Albany-Saratoga and maybe even further on the tour.

Rich said, “After driving to the track, racing and then going directly home to work the next day it is tough, but the people in racing are good the DIRT(car) has a pleasant group of people to be with.”

Times haven’t changed as much as some might think as he said, “In ‘97-’98 Troyer had a four coil car. There were less shock people around then, but there are plenty today. The main thing in racing is the guy behind the wheel. I feel it is sixty percent driver. Everyone has good motors, and a shock package now. It is just a matter of being in the right place on the race track and running the right line.”

So this year he will be racing at Albany-Saratoga on Friday and the Series.

This year is also a bit different for the Jersey driver as he explained, “I’ve been together with Randie for twenty plus years and we got engaged. I told her when you are ready to marry me let me know. A few weeks ago she called up and said be at my house at 3 p.m., we are getting married. I got out of work at 2:30 and got married a half hour later.”

On the back panel of the 8 is ‘George’s Garage’ and Rich said, “Randie’s dad use to own George’s Garage so she likes to see that on the car.”

Rich is ready for another season, but knows it is catch up time as he noted, “I need to get better as the car right now is definitely better than the driver.”

He will work on that for the next three nights in Volusia.