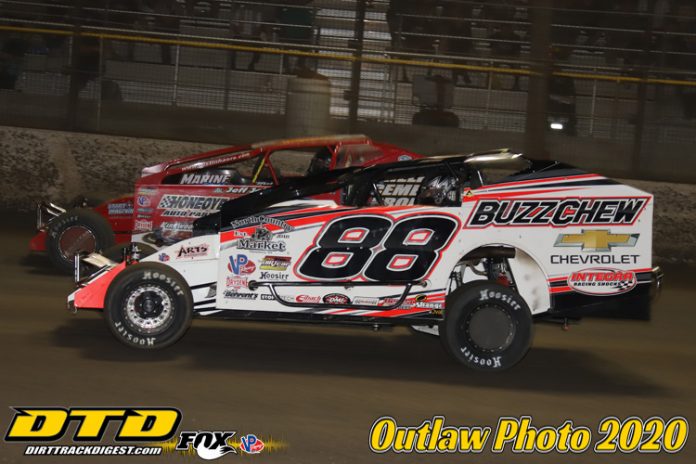 Emptying the notebook at 2 a.m. this morning there was some old news that I had to catch up on and plenty of new stuff from night three of the Super DIRTcar Series DIRTcar Nationals at Volusia Speedway Park.

On Wednesday night Pat Ward drove the final 15 laps of the race with no brakes after a brake line got pinched off.

Ralph McBride was in the pits driving the yellow 13 out of the Regalski hauler. It appeared motor problems eventually sent him to the pits during the consi.

Matt Sheppard had handling problems on Wednesday, but the team went back to the basics and Matt was fast timer on Thursday.

Mods packed the race track for a long time to get the night going.

JoJo Watson lost the rear end on the first hot lap session and the team thrashed to get the car back on the track for racing action. He was close to qualifying via the consi, but failed to do so.

Jimmy Phleps and his team “went back to the old stuff.”  It was noted they “came down to try some things as you don’t get that chance to do that back home.” It paid off as he timed second quick in his group with a 17.864. He had an 11th place run in the feature.

Mike Maresca had to replace the front clip on his car and it resulted in a second quick time in his group with a 17.865.

Mat Williamson had an off night as the group he was in was mighty formidable. Laubach, Phelps, Brett Hearn and Peter Britten were all faster than Mat and only Tim Fuller and Rich Scagliotta were behind him.

Williamson lost a left rear shock to bring out the yellow on lap 13 of the main event.

Andy Bachetti also had a shock issue and pitted.

Justin Haers bad trip south continued as he pitted on the 13th lap with the other two.

In the end Williamson was 15th, Haers 22nd and Bachetti 24th.

Larry Wight was dominant throughout.

Stewart Friesen arrived late, but came home second. He could see Larry, but just couldn’t catch up to him as he finished 2.8 seconds behind the winner.

Erick Rudolph was a solid, all by himself, third.

Maresca rebounded from a crash to fourth.

Hearn had his second top five in two days with a fifth.

Billy Decker started 12th, ran the middle to upper side of the track for sixth.

Sheppard started eighth and ran 7th for 27 of the 30 laps.

Billy Dunn continues to have impressive runs as he started 17th on the field and at the halfway point was 11th and he was able to come home with a solid ninth.

Last year’s SDS rookie Demetrios Drellos completed the top ten after being in the draw.

If you were going to watch one balls out, and rim riding driver it had to be Peter Britten as he simply did everything in his power to gain any possible advantage. How he didn’t bury the car into the wall is beyond me. A spectacular ride for 12th.

Pat Ward started 16th, got to 14th on the 27th and on the last lap picked up 13th. The cars were pretty jammed up in the middle of the pack.

Jeremy Smith got into his second feature of the week as did Brian Swartzlander.

Jim Rasey fought and fought in the consi to pass JoJo Watson and become the final regular qualifier. He completed 29 laps and finished 23rd.

Strange announcement as apparently someone had been throwing things at the gators in the “gator pond.” A stern warning was issued indicating that the gators have permission to come out and eat what they want if someone throws things at them.