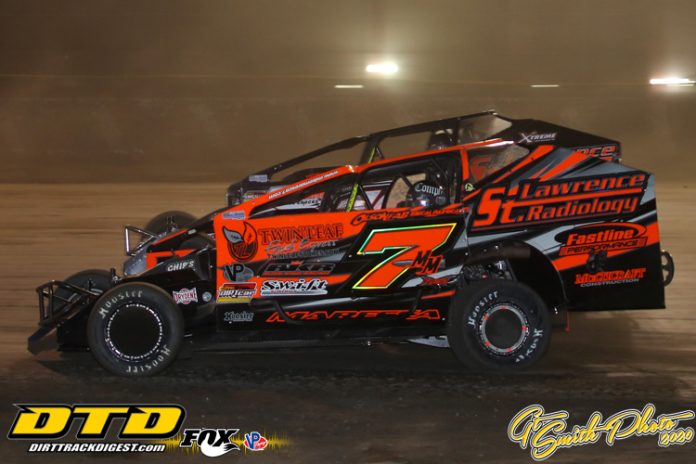 On Wednesday night defending Fulton Speedway Outlaw 200 winner Michael Maresca went into the first turn at Volusia Speedway Park and had some difficulty.

He ended up hitting the outside wall inflicting front end damage on the No. 7mm.

Mike was back in action on Thursday night and finished fourth in the 30-lap feature at the DIRTcar Nationals for the Super DIRTcar Series.

Michael told Dirt Track Digest, “We had the front clip destroyed so our whole team worked super hard and Randy Williamson gave us a huge help. We straightened it the best we could and I think it’s pretty close considering the circumstances.”

Continuing he said, “With two porta powers and a welder, Randy had it in pretty good shape.”

On Thursday night he timed second in his group to Matt Sheppard, finished second in the heat and came home with a solid fourth place finish for his best run thus far in this year’s edition of the DIRTcar Nationals.