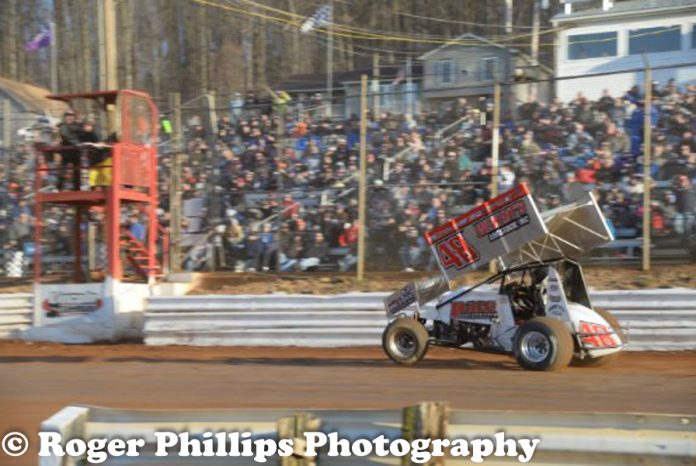 It took nearly an hour, but at the end of the Icebreaker 30 at the Lincoln Speedway it was Danny Dietrich coming out on top for his first win of the young 2020 season.  Dietrich’s season began a few weeks ago in Florida, but it wasn’t until he came back home to Central Pennsylvania that he was able to park his No. 48 in victory lane.

It wasn’t an easy win for Dietrich after he started on the inside of the second row.  He survived multiple cautions, multiple restarts and an ever-changing track before finding his way by early race leader Ryan Smith to get to the top spot and the $4,000 win.

“I didn’t think that race was ever going to end,” joked Dietrich.  “The track changed a lot from the beginning, middle to end.  Ryan (Smith) had the lead there I knew the top was going to away in one and two.  I told myself to be patient down there.  I knew if I could get him forcing the issue a little bit up top, he might jump the gun on entry.  There was nothing there.

“It was a just a matter of time.  It comes from the experience of being here knowing that’s what’s going to happen.  I don’t know if he got into the fence when we went by him, but I saw him get in there pretty hot.  I think the pressure was on him a little bit.  That was what we were trying to do.”

Upon securing the lead, Dietrich had to contend with pressure from World of Outlaw regular Logan Schuchart. Shark Racing was taking advantage of an off weekend with the season to compete closer to home in order to get some track time.

“I knew that I didn’t need to open my entry into three because he was probably going to drive by me,” stated Dietrich.  “Logan (Schuchart) keeps you on your toes.  Every caution I was trying to get a signal to see if I was alright or not.”

When pressed during his victory lane interview on whether or not Lincoln Speedway can expect the Gettysburg, Pa, driver on a regular basis he indicated he’ll probably be calling Port Royal Speedway home in 2020.

Schuchart in the Mix

With the Outlaws on hiatus for a few weeks, Logan Schuchart made his presence felt as the Pennsylvania driver returned to his roots to compete at Lincoln.  At times, Schuchart looked stronger than Dietrich in the A-Main, but it wasn’t enough to overcome him for the win.

“I actually felt good in three and four where I could cut across the bottom and catch the sticky stuff coming out,” mentioned Schuchart.  “He (Dietrich) is just always good.  I at least wanted to get in lapped traffic to have a shot at him.

“In one and two there at the end, he’s leading, when you out front like that you are a little more conservative.  I don’t know if he wasn’t running as hard as he would if he was in second or third.  I’m in second, I’m trying to win the race.  I’m pushing a little harder than he is.  That could have a little to do with it.”

The purpose of the visit was for Schuchart and company to get better at Lincoln for later in the season when the series makes a visit to the Abbottstown, Pa., oval.

“We were better than we have been the last couple years here in (World of) Outlaw competition,” cited Schuchart.  “At least we have something.  All winter I knew we were going to run this race.  I was trying to think about it the last few weeks.  We are definitely close.  I don’t know if are as good as we need to be, but it’s cool to run second here.”

Racing officially got underway at 2:26 p.m.  Over 20 minutes later than the scheduled start time.  Speedway officials indicated that the delay was caused by lines waiting to get in…

Heat races took just 30 minutes before a long intermission for the redraw.  Then another break was taken after the B-Main.  The feature took nearly an hour with the program concluding just before 5 p.m…

The first heat saw both Justin Whittall and Bradley Howard get over.  Whittall was done for the day while Howard made repairs and qualified through the B-Main…

Cale Thomas made his debut in the John Trone owned No. 39 formally piloted by Cory Haas.  It was a struggle for Thomas as he failed to make the A-Main…

Smith, who led portions of the A-Main, indicated afterwards that his Mike Heffner owned No. 72 lost brakes causing him to slam the wall…

Brock Zearfoss and Brian Montieth both lost top five finishes when their were forced into the pits prematurely due to mechanical failures.