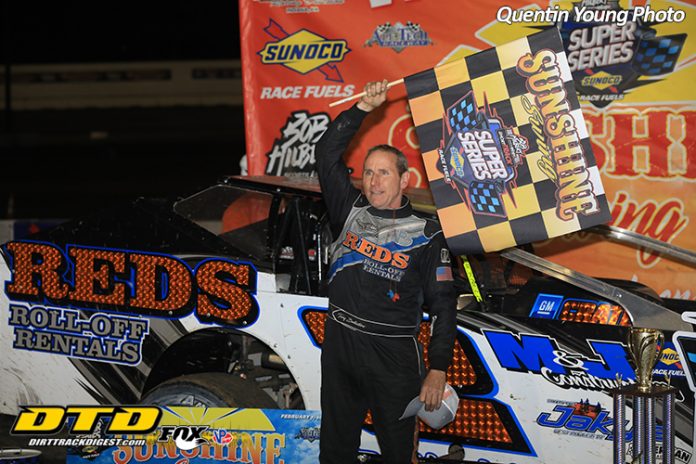 On their late father’s birthday Mike and Tony Ballestero found themselves in a very unique situation celebrating in victory lane at All-Tech Speedway in the first ever appearance at the Lake City area track.

Ironically, Tony said, “My dad did not want us to race.”

With the Thursday night show hurricane wind and rained out, the stage was set for two full shows on Friday and despite the frigid conditions the brothers were hot on the track.

Mike captured the first main event and his brother Tony followed up and in the wee hours of Saturday morning.

Wandering over to the trailer the next afternoon looking for the duo Dirt Track Digest found Tony as he noted, “Mike’s taking a nap.”

Sitting down Tony talked about racing as he noted, “I run at Albany-Saratoga and after 10 years off came back last year and had some successful runs and picked up four features win.”

Of the first win of the season he said, “I enjoyed this for the guys. It is unbelievable as we are 1,200 miles away from home.”

Reflecting on the race he said, “I started 11th and fell back to 14th. We made some changes before the feature we never should have made. I saw someone do something and tried it. He showed it to me way too early and I just dug deep and drove. I got by Tim Hartman Jr. which is quite an accomplishment. It was a lot of hard work, but it was well worth it.”

He felt the trip was worthwhile as he said, “Deyo puts a super show together and I have to give a shoutout to Lyle Devore (Albany-Saratoga promoter) as he does the same thing. This is just awesome.”

After Mike won the first feature you would have thought things would be flying high, but you have to remember this is racing.

About Florida he said, “I wasn’t coming down to start, but it was a race and we felt we would have a good time. So we locked the door to the shop and here we are. This is a tough, tricky track and after a couple of moves I was able to set sail.”

It was emotional as Mike explained, “It has been a long time since I won a race. The last win I had was 17 years ago. I am sure my father was watching down. It is so hard to win now and we were just so fast out of the box tonight.”

Mike didn’t get to celebrate very long as Tony explained, “Mike blew the motor in the heat of the second show.”

However, there on Saturday afternoon, Tony reflected on what the team had done to get his brother back on the track for the final night.

“We got the motor in just a little while ago,” said Tony. “There was a track regular who lives about 15 miles from teh track and he said he had a motor. We have a new one at home, but no one can carry it on a plane. So we went to the shop at 3:30 this morning and started putting it in a nine o’clock this morning.”

So for the Ballestero brothers the trip to Florida will be long remembered.

This one was special, to have Mike and Tony win on their late dad’s birthday was something that the stars had to align perfectly for.