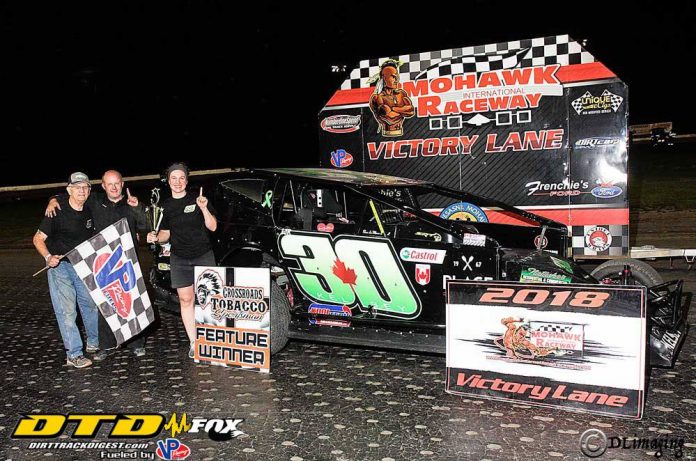 For close to 28 years, Brent Kelsey, a native of Plantagenet, Ontario, has been strapping on a race helmet to battle for that visit to victory lane at one of many tracks Brent competed at.

Brent’s father, Terry Kelsey, who raced snowmobiles for years during the 70s and 80s, heavily influenced Brent as a young boy in the world of racing.

By the early 80s, Terry Kelsey was racing at Brighton Speedway in the Super Stock class. All of the these different forms of racing had a profound effect on Brent and by 1992, he wanted to get his feet wet racing in his own machine.

That first year of Brent’s racing career was at Capital City Speedway in the enduro class, learning the ropes along with getting the feel for handling a race car.


The 1993 season saw a change for Brent, moving from asphalt to dirt at Edelweiss Speedway, racing in the Duke Stock class.

For Brent, the move to dirt was a positive change. He then began racing at Cornwall Motor Speedway in the Street Stock class.

Kelsey quickly moved up to the Super Stock Class at Cornwall for the 1994 season and won the Rookie of the Year for that class.

Coming off a banner season, Brent decided to make a big move up into the CASCAR Late Model division at Autodrome St-Eustache, where the competition in that class was very strong.

Kelsey used the 1997 season more or less as a learning opportunity and ran mid-pack for the entire season.

Brent explains: “Yes we made the jump from the Renegade class as we won a lot of races in 1996 and we thought it was time. But 1997 was a tough year trying to figure it all out. There are so many tough teams and great drivers there, that first year was tough!! However, we did improve a lot in 1998 and were consistently the top 10 team at Capital City Speedway — a great achievement for a small team like ours.”

For the 1999 season, Brent once again changed things up and began racing the Old Milwaukee Pro Truck Series at St-Eustache. He would also race at Capital City Speedway for another team.

For the next several years Brent would pick and chose events due to commitments at work and home, putting racing full time on hold. Brent, however, began racing the Pro Trucks at
St-Eustache in 2002.

By the 2003 season, Kelsey was a veteran of the Pro Trucks series at St-Eustache and finished seventh in the point championship. That year, he would also win the biggest race of his career, winning the Old Milwaukee 100, one of his most memorable moments in racing.

By 2007, Kelsey was once again changing things up in his racing program. Brent was back at Cornwall Motor Speedway but more importantly, he also included the Mohawk International Raceway racing in the Semi-Pro class. The importance of adding this raceway to the program is that it would later become his home track by 2010, where he progressed to the Sportsman Modified division.

That first year in the Sportsman division at Mohawk International Raceway, Brent won the Rookie of the Year plus he finished third in points for the championship.

2012 saw another third-place finish in the point chase for this husband and wife team. Brent and his partner, Natasha, proved that you do not need a high budget program to have a winning combination.

In 2013, Team Kelsey once again ran a full season of racing. This small team just kept on being strong, coming home with enough points to finish fourth in the championship that year.

For the next few years this team dialed back their racing program for commitments at work and home. In the 2014, Brent did finish sixth in the points, but did not race the 2015 and 2016 seasons.

Team Kelsey was back in 2017, running a full season. Brent once again battled for the championship but finished a mere nineteenth points behind Johnathon Ferguson. This was the fifth time that Brent came within inches of winning the track championship. The team also finished fourth in the Number One Speed Series at Mohawk.

The 2018 season was interrupted due to family commitments, reducing their race program by half, but they did pick up a win on June 18 which the team dedicated the win to Brent’s mother.

At the beginning of last season, the team was set to run a full season. Brent and Natasha worked hard over the off-season to update the car along with securing Lamarche Electric out of Rockland, Ontario, as the team’s primary sponsor. The first race of the season went well with Brent coming home with fourth place finish.

The car was running well in the second race of the 2019 season, but halfway through the feature event, Brent got caught up in a big crash on the back straight, which sidelined the veteran driver for the rest of the season.

“The wreck I had last year was the worst wreck I have ever been in!! When you have raced as long as I have, it’s bound to happen! Afterward, I took some time off and healed up and worked out to be the best I could be for the 2020 season. The worst part of the crash was the fact that my wife and my dad had to witness that.” For 2020, Team Kelsey is back and ready to get back racing at their home track of Mohawk International Raceway.

“We have put together another Bicknell for the 2020 season and look forward to getting back on track.  We are very excited to have Lamarche Electric return as our main sponsor for the 2020 racing season.”

For Brent and Natasha, this little team has proven in the past that they can compete with any of the teams out there and have the tenacity to win. 2020 just might be there season to bring it all home.