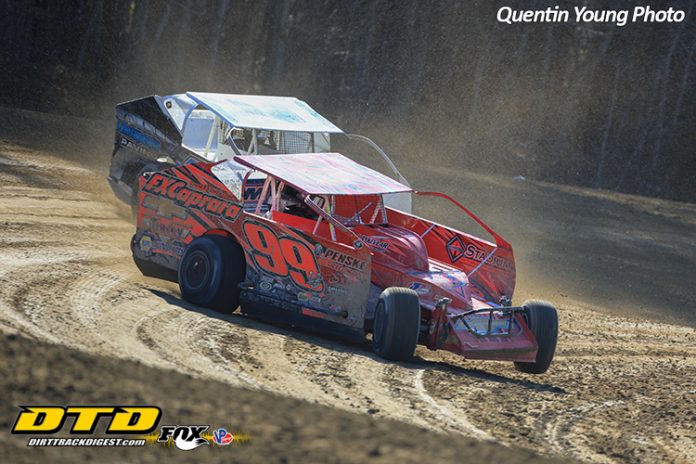 By KEN BRUCE and MIKE MALLETT

Sunday was a day of redemption for several drivers at the Georgetown Speedway as the small-block Modifieds took the track for their own 30-lap affair worth $4,049.

After a disappointing Saturday night in the running of the Melvin L. Joseph Memorial STSS race, Ryan Watt bounced back on Sunday for a hard-fought second place finish.

Saturday night found the Boyertown, Pa., driver leading the way and looking like the car to beat when a $2.00 bolt faltered on the front end of the No. 14W leading to total front end failure and forcing Watt to pull out of the race. Hoping for some redemption on Sunday racing his small block, Watt raced from his 16th starting spot without the benefit of a caution in the feature to finish behind race winner Billy Dunn in second.

“The car was extremely good today,” cited Watt. “The track rubbered up but, when it did, it got wide. It rubbered up all across the track and you could run anywhere you wanted, unless you got too high. The thing was when I pressured some guys, like when I got to (David) Schilling, it took me a little while to get by him because we only went with a 48 RR and it started to get hot and giving up on my entry to the corners. I had to slow up my entry a little bit and slow down for a couple of laps and then make another charge at him. I had to do that a couple of times when I got to somebody. At the end there I could feel the tire giving up altogether, but then I saw Larry (Wight) under me the one lap so I knew I had to go.”


After not making into a redraw spot in his heat, Watt knew it would be a tall task to make it to the front in the feature event.

“I knew in warmups the car was good and it was good in the heat race also, but with as heavy as the track was we just didn’t have enough motor to make it into a redraw spot,” said a happy Watt in his trailer afterwards. “But in the feature, the track came right around to where this motor came into play.”

With eventual winner Billy Dunn so far out in front of the field Watt wasn’t quite sure where he finished when the flagger threw the checkered flag to end the race.

“When I got by whoever it was for sixth, I saw Billy get the lead and at that time I really wasn’t sure who the leader was,” explained Watt. “I knew Billy Dunn was still ahead, but at the end I really didn’t know where I finished until they came over the radio and said I finished second. I didn’t know if there was anybody ahead of us except for Billy because I didn’t pay attention to who started in front of us. Honestly, in the beginning with the way the dust was for the first couple of laps, I couldn’t tell who I was passing especially in the corners. That could’ve been really ugly there at the start when Craig (Von Dohren) blew up.”

Even after with what happened on Saturday night in the STSS race, Watt was happy with his cars and his team’s efforts throughout the weekend.

“We ran well enough yesterday where I think we should’ve won or at least finished second,” explained Watt. “To come out of here today with a second-place finish is great. Both days we had two brand new cars we brought out here and both cars were in contention for the win so you can’t ask for anything more than that.”

Richie Pratt ran up front all day with his No. 51 and ended up finishing third in Sunday’s small-block race, but after the race Pratt was not happy with the way the car was running.

“It was (the third-place finish) a product of our starting position, we weren’t very good,” explained Pratt after the race. “I think if we had somewhat of a decent car, we could’ve run away with it being it was non-stop, but we didn’t and that’s how it goes sometimes. We’re trying things just like everybody else is with the different suspension stuff and we’re learning, and I guess we’ll try again next week at Delaware.”
Stewart Friesen backed up his win on Saturday night with a fourth-place finish after starting 18th. Friesen ran the Bicknell mount that he’ll utilize at the Fonda Speedway when the season starts there in early April.

“It was alright,” stated Friesen. “It would have been nice to get a couple more cautions there. It kind of rubbered, but the top was still kind of good in one and two. We learned a lot to build some notebooks with these cars. We’ve been trying some different packages and stuff. Fourth is alright. We weren’t sure where we were and then they told me at the end of the race to go to the scales.”

Larry Wight won his heat going away, but a poor redraw put him mid-pack for the start of the feature. Wight almost didn’t make it after having issues at the conclusion of the heat. He was pushed to the scales after he lost an oil pump belt coming to the checkered. He ended up finishing fifth.

“We didn’t even have a chance to do anything with the car,” said Wight. “We ended up spitting an oil pump belt going across the line at the checkered in the heat race. We were running around like crazy looking for one. Luckily, a crate Late Model up front had one that was close enough we were able to make it work. We made it out just in time.

Billy Pauch Jr., almost didn’t make it out for the feature.  The team had to replace the ignition box when the car wouldn’t fire to get in line. After diagnosing the problem, the team just barely made it out for the race, but instead of starting in the fifth spot, Pauch had to start the race at the rear…

Carson Wright flipped his No. 91 coming out of turn four in his heat race ending his day. Fortunately, Wright was okay after his hard crash…

Anthony Perrego looked to be the car to beat early in the race as he moved up quickly from his 10th starting spot and looked to take the lead from then leader Jeff Brown, but as Perrego was going outside of Brown in turns three and four Brown force Perrego up the track and the Montgomery, N.Y. driver went up and over the banking losing a handful of spots. After that incident, Perrego’s No. 44 was never the same…

Craig Von Dohren made his debut in the B. Brueche, Jr and Sons No. 30 and looked very fast in warmups and in his heat race. Unfortunately for Von Dohren, he never was able to show what the car had for the feature after exploding a motor before a lap could be completed.