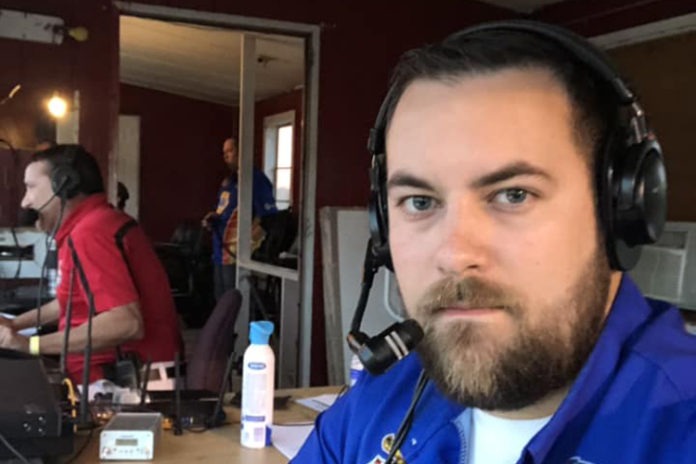 It seems only a couple of years ago when Adam Buchanan started his announcing career at the Brewerton and Fulton Speedways as a young infield on-track reporter.

However, Buchanan has become one of the announcers who could continue for decades calling the action at local tracks.

Dirt Track Digest: What are you currently doing?


Adam Buchanan: “I am the co-announcer at Brewerton and Fulton Speedways. I get there early and talk to the drivers pre-race. I announce lineups and the racing action as the night progresses, also get in sponsor reads and post race interviews after the racing concludes.”

AB: “The thrill of announcing a good side-by-side battle or a close finish is my favorite part. As a fan gets excited seeing that action, I get just as excited announcing it. Bringing the battle to life verbally makes my hair stand up, my voice tone increases and adrenaline kicks in there’s nothing like it. In my mind it’s the next closest thing to getting in a race-car and driving in terms of excitement.

“Also, the family aspect within the racing community more specifically within the tower keeps me coming back. We are a big dysfunctional family up there.  It takes a lot to run an efficient show and to be a small part of it is something special. I also enjoy interacting with the Jr. fan club events throughout the years. Getting the younger generation involved in our sport is important and in doing so their has been a fair share of shenanigans happening along the way.”

“Racing season is a short one in the minds of racers, but to put it a family’s perspective, it’s a long one. My wife has gone to countless family parties, cookouts, birthdays, and more than a few weddings solo because racing is every weekend in the prime months of the year. Between my full-time job and two nights of racing, free time is at a premium every week. There is no picking and choosing events like a race fan or taking a few weeks off.  It’s a commitment. Sunday is really the only time I have to see family without anything else going on. Thankfully my wife and family understand my passion, but can also understand their frustration sometimes with how my schedule is.”

AB: “Oh I think we are all fans to a certain degree, we almost have to be otherwise why would we do it. As far as a rooting interest, especially as an announcer, it’s important to stay as neutral as possible. I root for a good race rather than a particular drivers result. However, when you go around and talk to drivers you get to understand their situation, if they’re on a cold spell or haven’t caught a break all season. Then one night you see them go and win a heat or bring home a good result you try convey that to the fans the best way you know how.”

AB: “I have been announcing 11 years. I have worked primarily at Brewerton and Fulton Speedways since 2009. I was also the Go Nuclear Late Model tour announcer for a number of years, which took me to a lot of racetracks in New York and Canada. I have also filled in at a few racetracks where and tours as well when needed and my schedule permitted.”

AB: “After so many races they all kind of blur together. I remember interviewing both Danny Johnson and Matt Sheppard after their tangle during the 2010 Outlaw 200. This happened my second year as an in-race reporter that was memorable for a number of reasons.

“Announcing my first Outlaw 200 and Hurricane 100 weekends in the booth were both mighty memorable, the feeling of announcing big events like those after a number of years working hard in the pit area felt fulfilling. My final one was a few years back working next to Johnny Gibson. I called the Mod win and you’re in and he called the Outlaw portion then talking hockey at the end of the night, as he’s a big Penguins fan was cool.”

AB: “Because I love it, granted some nights are harder than others. Some nights I’m itching to get back in the booth and call the action, other nights when you have a feature dragging it can be difficult to stay on your game. I have a hard time picturing myself not at the track.  To know it’s going on and you’re not a part of it after so long can be difficult. I would also miss my racing family up in the booth, some nights they are what keep me going and juiced up when I’m having an off night.”

AB: My family has always been a racing family and it started at a young age. My father loved racing most of all and being his only son out of six children we used racing as a way for us to bond together. My fondest memories as a child were going to Brewerton on Friday nights to watch Billy Decker, Gordy Button, and Tommy Kinsella battle it out. My parents have always supported me no matter what the situation, giving up spare weekends and a boatload of money to get me started in racing as a kid. That continued when I started announcing.”