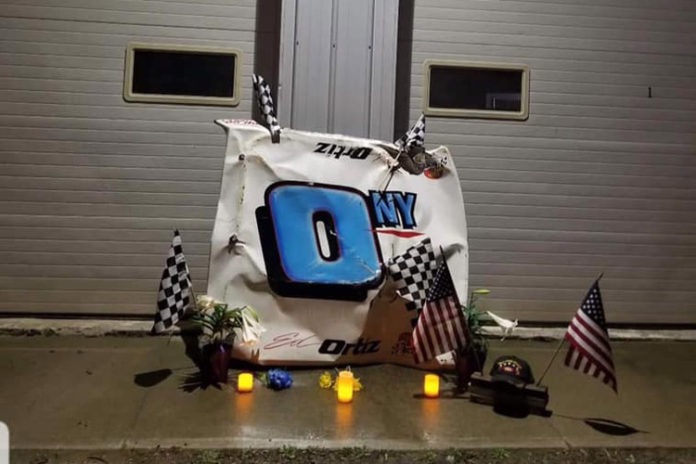 Ortiz’s first victory came at Merrittville Speedway in 1958. The wins kept on coming for Ortiz, who would become the first American to win a track championship at Merrittville in 1961. The following season, Ortiz would win track championships at Ransomville and Canandaigua. He won his second Canandaigua title in 1963. He would also win the track title at Lancaster Speedway on the pavement in 1966 and then win the title at Rolling Wheels in 1971. He was also the NASCAR New York State Sportsman Champion in 1962. In the early ’70s, Ed drove for winning car owners Gil Bruss and Bill Sandman. Ed was successful on both the dirt and on the pavement When he retired after 25 years behind the wheel, he earned 199 career wins.

Ed told Western New York native and current Public Relations Director at Worldwide Technology Raceway John Bisci that “If they heard of a race somewhere that paid well, they’d go.” Ortiz was a very popular driver and was loved by the fans, young and old. In a story published in the Buffalo News, Ed’s son Jipper said that “I was just a little tyke, but I do recall all the fans who used to crowd around his car to meet him in the pits after the races. I thought that was the way it was for everyone. I now realize that’s not the way it is for all drivers and the fact that so many people came to my dad’s pit tells just how popular he was.”

Like their father, sons John and Jipper raced at Ransomville. Jipper was a fill-in driver for his brother in 1993 and went on to a career that earned him track championships throughout the region and a Mr. DIRT Pro Stock title. Jipper’s DIRT Sportsman found victory lane at Syracuse during Super DIRT Week with a young Erick Rudolph behind the wheel. Jipper would also build Pro Stocks that raced throughout the Northeast with his Stinger Chassis and served as the starter at Ransomville for several seasons.


During his retirement, Ed and the family totaled his victories and came up with 199. The family encouraged him to come out of retirement and shoot for win 200. In 1998, Ed Ortiz came out of retirement to drive Jipper’s Pro Stock at Ransomville at the age of 66. One night, he would finish second in the main event. After technical inspection, the winner failed inspection, handing the win to Ortiz. He earned his 200th career win after all. Throughout his storied racing career, Ortiz raced at over 30 different tracks throughout the Northeast, Southern Ontario, and up and down the Eastern Seaboard. Ed was inducted into the Friends of Auto Racing (FOAR SCORE) Fan Club Hall of Fame in 1987 and was inducted into the Northeast Dirt Modified Hall of Fame in 1999.

Ed served his country during the Korean Conflict. He received the Korean Service Medal with 1 Bronze Star, Combat Infantry Badge and the National Defense Service Medal. He took over his father’s garage and ran it for nearly 40 years. He also worked at Cliff Connors’ Service Station and the Ransomville Bus Garage for 20 years.

He was known to be a truly kind and helpful person to everyone. During his free time, Ed was an avid vegetable gardener and enjoyed snowmobiling.

Ed is survived by his wife of 62 years Betty; his children Jipp, Ronnie, and John. Also, seven grandchildren, five great-grandchildren, and his beloved dog Teko. Memorials may be made in his honor to the Niagara County SPCA, or the Ransomville Volunteer Fire Company Ambulance Fund.