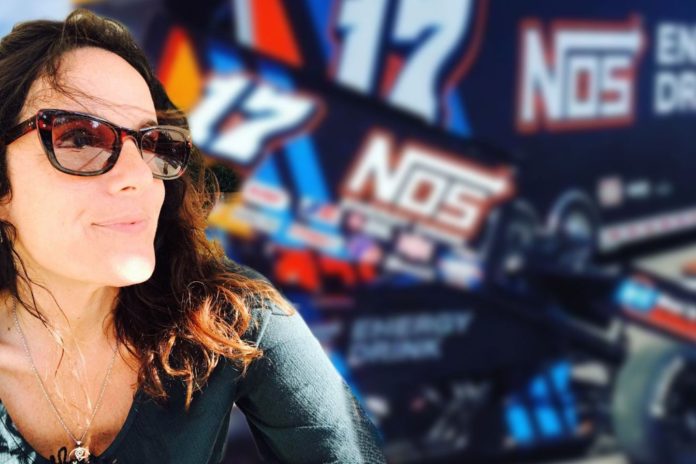 If you ever have wandered into the media center at any World Racing Group events there has long been a woman who assists tremendously in making certain you have the information at your fingertips to provide coverage for a major event.

Cristina Cordova has become a go-to person for the media and her expertise places her in a class with the best in the business.

Cristina Cordova: “I give my high school boy friend initial credit for sparking my interest in classic cars, muscle cars and hot rods. Then, while working for Craftsman, and exploring new marketing campaigns for a company that was primarily driven by Mechanics’ Tool Set sales, I started annual car builds. After the second build, I was like ‘well, we build this badass car (a ‘65 Comet Caliente), but now what?’ So we decided to put it to the test and start racing it-autocross. The following year we built a 1913 Ford Speedster Twin T and had Jessi Combs race it in the ‘Race of Gentleman’. Well eventually Craftsman decided to sponsor the World of Outlaws and the rest is history.”

DTD: What are you doing at the track at this time?

CC: “I oversee all things digital at the World of Outlaws and DIRTcar Racing including websites, social media, and DIRTVision. Mostly I am neck deep in data.”

CC: “Definitely, the dirt family. The people, And how everyone comes together during adversity, no matter how small.

DTD: How many tracks and what tracks have you worked at?

CC: “I’m a newbie. Just the World of Outlaws and DIRTcar tracks. Four years now, but I’m still a newbie for sure.”

DTD: What are some of the toughest moments for you?

CC: “Drivers getting hurt…dying. That’s something you can not get used to or ever forget. They’re family. I mean…here I am avoiding their names.”

CC: “Clearly I’m a masochist and because I love it.”

CC: “Not at all. I came from a mostly academic family. We went to the theater, the orchestra, the ballet. Yeah, it’s sort of funny.”

CC: “A lot of people really. Jessi Combs, especially in relation to being a woman in the sport. Jessi was the fastest woman on the planet and was known as the ‘fastest woman on four wheels’ as she has the land speed record. She died last year trying to break it.

Ford because I became entirely obsessed with the history of racing at the onset of the 1900’s. And well, my entire World of Outlaws and DIRTcar family.”