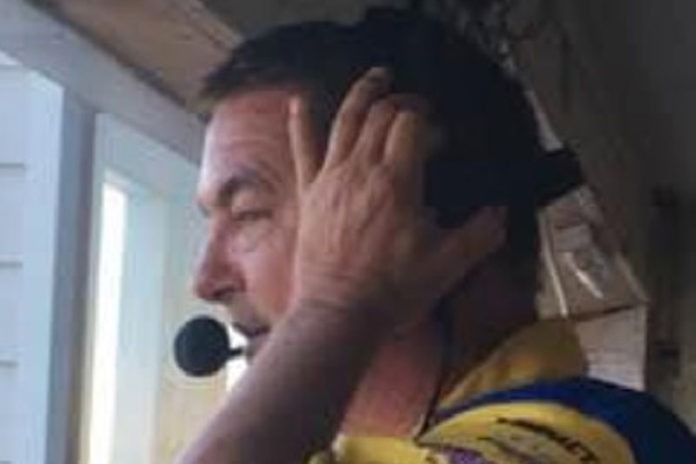 From crew man, to Brockville Ontario Speedway Race Director, Kingston Ontario’s Mike Kelly has seen everything, many times in his racing career. He’s stood in victory lane countless times with longtime friends after a feature win, he’s also won battles with major life events off the track as well. But through it all, the now third year race director at “The BOS,” continues to live everyday to the fullest.

“I was born in February 1965 and opening day in June of that year my parents carried me in a bassinette through the gates at Kingston Speedway.” Kelly described of his first moments at the races. “I guess you could say I got an early start in the business.” From that moment forward Kelly made Kingston Speedway his home track and watched his favorite drivers each week and also made frequent trips to Brockville Speedway also. Kingston Speedway sadly closed in 1976 and today is home to a large limestone quarry and anything resembling a speedway is completely gone. Kelly added that the speedway closing was a sad time for us all.

The late Norm Davies, simply known as Nifty Norm, won many races and track titles at Kingston in the Modified ranks and at other area speedways. He was Mike’s favorite driver. Kelly described a creative had a creative way of getting to the races to watch Nifty run every week. “Nifty’s wife Nancy was my third-grade teacher and every Friday she used to give me a ride to the race track to watch Norm race because she knew he was my favorite.”

From watching his heroes in the grandstand every week Kelly would lend a hand to several Kingston racers through the years like Art Aylesworth, the late Doug “The OX” Carlyle, John Dahm, Mark Hitchcock, Todd Stewart and until 1999 with Danny O’Brien. “I helped a lot of different drivers out and just loved being around it and had a lot of success and went to a lot of places with Mark and Danny, traveling to other tracks was a great time.”

“I especially enjoy being able to say I have a perfect record behind the wheel of a race car too.” Mike reflected on his win in a 358 Modified mechanics race in 1990 driving Mark Hitchcock’s car at Can Am Speedway, which had survived a flip that night and was torn up.

“I thought the dream was over.” Kelly remembered, “The bodywork was smashed in there was no floorboard but Mark told to get in, hold my feet up and drive it! The plan worked I drove away from everyone.” Number One Speed founder Norm Dunn asked Mike if he got a look at the gages to see temperatures and RPM’s. Mike simply replied, “I have no clue, couldn’t see!,” referring to the fact his helmet was too big and it flew up blocking his vision down the straightaway’s every lap.

When asked of his most memorable moments and a moment he would like to forget during his journey as a crew member, Kelly cited the crash at Can Am in 1996 that nearly claimed the life of longtime friend Danny O’Brien. “I wasn’t there that night due to work commitments but was in Kingston General Hospital the next morning to see him at 6am and it was tough on all of us.” Kelly said the happy moment ties in with this because of what Danny’s older brother Pat accomplished the very next week.” A few of our guys went over to help him out and we watch Pat win the feature that night and win the track championship, all of us had tears in our eyes it was a special night for sure.”

Kelly took nearly a decade away from the racing scene raising his daughter Kristina but still kept a close eye on what was happening at the track. He said “once you’re in and you step away and then come back, it’s really hard to stay away from it.

A health scare in 2012 saw him go through some of the toughest times in life but following 6 months of chemotherapy treatments, Kelly’s love for motorsports led him to a brief stint as marketing director with Bobby Herrington Motorsports which he loved doing. “It was a blast getting sponsors together and helping a longtime friend’s racing program and being able to be back at the track and seeing old faces again made me realize, that this is where I need to be.”

So where did this drive to want to take the helm as race director come from in 2018 after everything he had done previously? It was many years of being in charge at his job of 31 years as a Field Contract Administrator for Invista in Kingston, listening to how Super DirtCar Series events were run at his home tracks and while spotting for various drivers, he always had his trusty one-way radio on listening to the officials and how they do it.

“I just always in charge of things at work and when I was at the races I would always listening to how things were run and traveling with the big block series on the Canadian stops, I still pick up things from the current race directors and I had an idea of how things were supposed to work.”

After a meeting with Brockville Ontario Speedway promoter Paul Kirkland before the 2018 season Kelly was simply interested in being the race director. “I told Paul I know what needs to be done and what is expected each week, I’ll do it if you want me.” Kirkland, having known Kelly from the many seasons at the speedway, said “the job is yours bud!” Mike was introduced as the new race director at a staff meeting in the off season.

“The majority of the drivers knew I meant business and even the ones I had affiliations with in the past, respected the fact I would call a fair race each week.” Said Kelly, when asked if drivers had thought certain drivers he knew would get a break where others wouldn’t. “I cleared the air on that right away, pretty much through the off season leading into opening night of my first season,” and since then he has earned the respect of the drivers in the pits at Brockville for running a show with as many as 5 divisions and usually ends between 10 and 10:30 every Saturday night. “The guys and girls know, when we are on track whether it’s hot laps or the 30 lap 358 Modified feature, we’re going racing and no messing around, we’re going green.”

The first year was a success but also saw hard times with the unexpected passing of his mother and brain aneurism, which nearly took his life. “Mom passing was hard but the day she passed she wanted me to be at the track and that’s what I did that night, the aneurism was a deal where they gave me about a 5-10% chance of making it and I came out the other end and if it taught me anything, live each day like it’s the last, and that’s what I do”

Now retired and living his best years as he described, I asked Mike how much longer he planned on being a race director and if he would like to do more.

“I love doing what I do at the track each week. I also enjoy doing what I do helping the Super DirtCar Series when they come to the track and I’m always learning new things working along those guys and girls.” “I’ve always wanted to get to a point and focus on racing all the time and at this time of my life I can finally do that, it’s awesome.”

“When I can’t get out of bed and move around by myself and when I can’t speak anymore, maybe I’ll think about stopping but right now this is where I belong, this is home for me.”