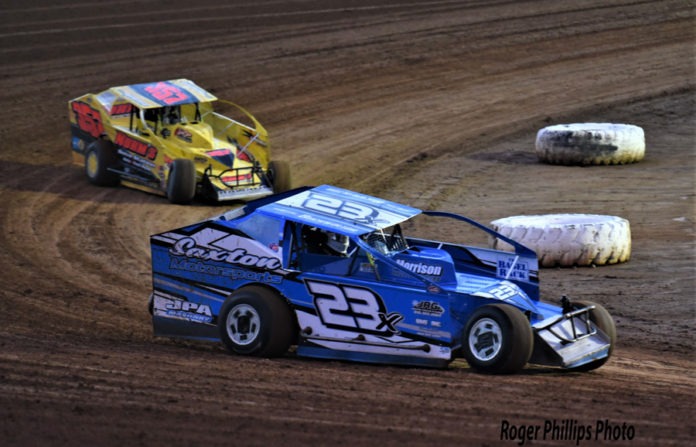 As the late country singer Jerry Reed once sang, “When you’re hot, you’re hot” and right now that is the correct way to describe Timmy Buckwalter. Since debuting the new Norm Saxton No. 23X a little over a month ago, the Douglasville, Pa., driver has been on a quite a roll. Buckwalter has won three races with his new Bicknell chassis, Morrison powered Modified since it’s debut. If it wasn’t for a couple of mechanical issues, the number of wins may be even higher.

Buckwalter has shown tremendous speed every Friday night at Big Diamond and probably should’ve had won a feature before last Friday. However, last Friday,Buckwalter and his team were able to put together a complete race and found themselves standing in victory lane at night’s end.

The multi-division driver wrestled the lead away from a strong running Mike Lisowski on lap 11 and once in front was able to take the win by a comfortable margin. It was Buckwalter’s second career win at Big Diamond and his first since August 13, 2013 thus breaking an almost seven year drought.

“This car has just been so good here or just about anywhere we’ve ran,” said an excited Buckwalter while his car was going through post-race tech. “We ended up seventh the first week, then blew out a u-joint going for third the next. Last week I got into the yuke tire there and we just haven’t had too good of luck here. We’ve been fast and I’m bringing back the same piece every week like you said tonight we were able to get that monkey off our back. We’ll keep plugging away from here and just try to keep solid.”

Buckwalter talked about his battle and pass for the lead with Lisowski.

“I thought I had him on the bottom there twice and then the yellow came out so he kind of knew to slow down and roll the bottom, then he started to really slow down. I got into the slop down low once trying to get him so then I said to myself, it’s time to get to the top. Once I moved up there I was able to power around him and then I wanted to get back down to the bottom so could keep my tires good by keeping it straight and steady going into the turns and that’s what I was able to do.”

With the USAC Wingless Sprint cars also competing at Big Diamond on Friday night, that meant that Buckwalter would be doing double duty by running both his Modified and the Gallagher No 5G wingless Sprint Car. Unfortunately for Buckwalter, the Sprint Car portion of the night didn’t go to plan with him going off on a double hook during the running of the heat race.

“I am not quite sure what exactly happened with the Sprint Car,” explained Buckwalter. “I was going three and four and something in the steering must’ve broke and it turned and I went straight into the wall. It’s a shame for them guys, they worked hard all winter and for a part to fail and destroy that much stuff the first night out really sucks so it was a 50-50 night I guess.”

When Jeff Strunk wheeled the Glenn Hyneman No. 126 hauler into the pits on Friday it just looked like business as usual for the team. However, when the hauler door was opened, and the car was unloaded heads started to turn in the pits. Instead of the iconic red No. 126 being unloaded, it was a blue No. 15 being brought out of the trailer. It was a strange thing to see for sure and had a lot of people scratching their heads. The car that Strunk would be strapping himself into on this Friday night was a car owned by friend Butch Getz who Strunk had run for earlier in the year with a second place up at the Penn Can Speedway.

“Butchie and I were originally planning on running at Big Diamond full-time earlier this year,” stated Strunk as he explained the circumstances with him bringing the No. 15 tonight. “Glenn didn’t want to run here originally with the busy schedule we had run last year, but with the COVID-19 stuff and Butch wanted to race at Penn Can because he is up in the points there and wanted to keep racing so I can’t blame him for that. Butchie is a great guy and I want to win a race up there (Penn Can) and I hope he does.”

Glenn decided he wanted to run here with the COVID-19 stuff going on and then last week we hurt the motor our Big Diamond car at Bridgeport so it kind of just worked our really good to bring this car here this week and give it a shot. Its kind of gives us a good barometer on what we have going on with our stuff compared to what this stuff is. It’s all good equipment and they both have the best money can buy.  I am very fortunate to have both Glenn and Butchie behind me to give me the opportunity to race here on Friday’s.”

Not many owners would let a driver come up and pick up one of then their race cars and not think twice about it. But when a driver with the reputation that Jeff Strunk has amongst his peers, it makes that decision a little easier.

“I’ve been friends with Butchie and the Grammes’, Brad and Joey for a long long time and have run for Brad many times over the years and won with him. Butchie has come into his own as an owner and a driver and they are just super people and you’ll get no better people than them. They are all hard workers and they all come from like me nothing who have busted their butts to get where they are and it’s good to be around people like that and to keep yourself surrounded by good people. I am very lucky to have people like Glenn, Bonita and Butchie behind me. I am very fortunate.”

Strunk not only jumped into a strange car, but it was a car he had just picked up on Wednesday night and hadn’t had too much time to tune on it before Friday. Finishing second was a good boost for the Bechtelsville, Pa driver.

“I wish we would’ve had some more time to work on it before the feature,” cited Strunk. “I wasn’t expecting them to call out the feature that quick, so we didn’t get a chance to change what I wanted to change but it was still a good run for us. Timmy (Buckwalter) has a really good car right now and has been fast everywhere he’s gone with it and to run second to him tonight is almost like a win but it’s still not a win. Hat’s off to Timmy, he’s been really good. We just need a little bit of tuning on this car and I think we can run right with him. Once again I have to thank Glenn, Bonita and Butchie for making this all come together tonight and thanks to Glenn for letting us use the hauler to get the car here, without them none of this would be possible for me. I’m not sure what we’ll have here next week but I know whatever we have will be good.”

Friday’s haven’t quite gone as well as Brett Kressley would’ve liked so far in 2020. Kressley who has four career victories under his belt at Big Diamond has struggled in his attempt to add to that number and last week was just a total downer for the No. 19K team. Kressley could not get the car to fire in warm-ups and was forced to load it up and head home early on. As per Big Diamond rules, since Kressley did not make it out for his heat race that meant he did not attempt to qualify for that night and was handicapped as not being there when it came to this Friday.

Although Kressley was not happy about his handicapping situation, the Orefield, Pa., driver made the most of his night with a strong run in the feature to take home a solid third-place finish. Even the feature did not come without troubles though as Kressley was forced to run the final third of the race with a left front flat.

“It worked out even though the night didn’t start too well,” as Kressley explained his night. “I thought I would have a good starting position, but they have some crazy rule, so we just had to work our way to the front. Our car was really good tonight, but it would’ve been better if we had air in all four tires there at the end (referring to his left front flat during the latter part of the race). With the left front flat, it does weird things and makes the car a little unpredictable and you can’t just drive the car like you would want to. Our cars are good, motors are good and thank you to everyone for sticking with me, we just need to get some momentum going here and we’ll be alright.”

Cliff Quinn made his 2020 debut on Friday night…

Tough night for points leader Mike Gular who got turned going down the frontstretch and slid into the yuke tire along with Nick Rochinski. It looked like Gular was done for the night but due to a major pileup on the following restart, the crew was able to make repairs on the No. 2A and Gular rejoined the field. Unfortunately, the car wasn’t the same and Gular wasn’t able to come back through the field and ultimately dropped out later in the race with what looked like a flat tire…

Last week’s winner Craig Von Dohren was involved in the multi-car restart tangle but was able to make drive into the pits, make repairs and returned to finish a strong fifth…

Billy Pauch Jr had a strong run going until a flat tire forced him pitside for new rubber…
Doug Manmiller who drove the Kris Graver No. 101 last Friday was back this Friday driving his more familiar No. 44…

This Friday night at Big Diamond will be another extra cash event with $4,000 going to the winner of the 25-lap Insigner Modified feature. The USS Achey Open Sportsman will race for a $1,000 first-place prize. The Red White and Blue Autos Roadrunners and the Heller’s Gas Street Stocks will both pay $500 to the winner…