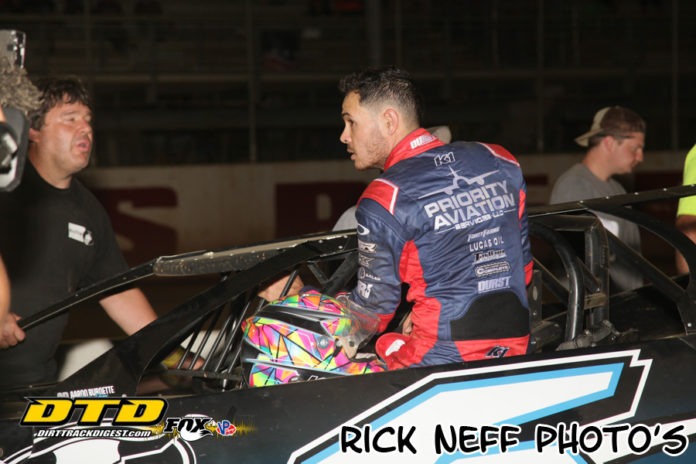 Everyone throughout our country, and the world for that matter, is well aware how unpredictable 2020 has been, both within our own everyday lives and the surrounding social aspects of life

The dirt racing season has obviously been no different. Seasons and events have been canceled and postponed, while others have popped up at times and places they never have in the past. While the overall effect of this has been very tough on the industry, it has also created situations with driver and team schedules that make shifting plans more feasible. Maybe weekly point chasing shifts instead to big-money races all year. Maybe the driver jumps around from team to team or touring series team during the week to weekly point team come the weekend. Or some of the bigger names and so-called “true outlaws” who have the freedom of making their own schedules in these times will even strap in different styles of race car or possibly take on new challenges in totally unfamiliar disciplines of the sport.

One driver in particular has checked off every one of those boxes in highly historic and prolific fashion this season, drawing a massive amount of attention across the entire dirt community along the way. Now world-class wheelman Kyle Larson is embarking upon a completely new driving endeavor. That sentence alone would invoke even more chatter and curiosity within a racing community still in awe after witnessing the record setting 28-year-old’s recent run of wins and podiums across several different open wheel cars and series in the last few months. But this latest venture vaults Larson into a completely unknown – full body dirt Late Model racing – and totally removed from any open wheel comfort zone on dirt for the first time in his career.

Needless to say, until a few weeks ago the chances of Larson announcing any next step in his schedule or career, or accomplishing anything in open wheel dirt racing community that could possibly draw any more attention to him than he was already getting were slim to none.

Enter seemingly innocent enough, unrelated interview comments Kyle made about looking forward to a chance to get into a Super Late Model at some point in general. Cue the social media superstorm. Eliminate a few empty rumors early on, and a week or two later this highly unexpected stage appears set after a test session video pops up on social media showing Kyle shaking down not just any Super Late Model owner’s car, but the very potent K&L Rumley Racing No. 6 Longhorn chassis racer that Tim McCreadie won $50,000 in last year at Lernerville.

One thing I can now say for certain upon witnessing the whole spectacle finally unfold in person Thursday at Port Royal Speedway? Both principles in this partnership aren’t the least bit concerned with simply getting noticed, selling t-shirts and taking things slow. Larson came here to put his transcendent talent to the highest test right away against the best Late Model drivers in the country, and in typical “Yung Money” fashion, there was no flinching whatsoever.

Thursday afternoon prior to night 1 of the Lucas Oil Late Model Dirt Series’ biggest, boldest and richest residency ever in the Central PA region, I happened to walk in the pit gate about the same time as Kyle, and decided to pick his brain a little for some details surrounding this highly anticipated deal coming to fruition and its potential future.

“I always believed that they were really, really cool cars with extremely tough competition,” Larson replied regarding his initial interest. “They put on a lot of really great races, so that’s why I always wanted to come and race with them and have fun with it.”

The connection with Rumley Racing ended up happening in a simple sort of manner.

“I never really worked that hard to find a ride or whatever until now, and I never wanted to do it unless I was in a good car,” Larson began. “Then the Rumleys heard I wanted to run some Late Model races, so we got in contact and were able to put something together. He told me to send him some dates when I was available, and that put us here.”

He finished his point already feeling pleased with the situation.

“These guys are just a really laid-back team. I’m happy to be with a great team and a great crew chief. Hopefully I’ll be able to get comfortable here fast and be fairly competitive.”

That hope would quickly become reality with no problem whatsoever.

Larson was immediately the fastest of a Port Royal record 55 Super Late Models on hand in hot laps, and then laid down a top six overall time trial effort to back practice up.

That put him on the front row for his heat, where he again stepped up the bar in blasting out past multi-time Lucas Oil Series champion Jonathan Davenport on the start and running away with it, winning by a straightaway.

The heat he was in already determined where its winner would line up within the other heat winners at the front of the feature field. Unfortunately, that was the sixth position, last of all the heat winners. With a lengthy rain delay during qualifying making a normally outstanding surface really heavy and somewhat narrow around the top, advancing around all that talent ahead of him wouldn’t be easy.

But leave it to a pure wheelman like Kyle to put any racecar anywhere it needs to get around the competition. Larson took fifth on the initial start, then settled in with the rest of the top five around the top with virtually no passing through the halfway point until a late-race caution would see him lining up outside on the restart.

From that point on, you would have honestly thought Larson was a long-time late model veteran and Lucas Oil Series regular with the battle he and super late superstar and current Series point leader Jimmy Owens waged to the loud cheers from a highly entertaining crowd. Larson took fourth right away on the start and then threw a monster slider on the Hall of Famer into turn 3 for third place. Never one to turn down a dance partner, “The O Show” planted his No 20 right back alongside the #6 and for the next few laps the two of them absolutely stole the show, leaning on each other and trading sliders like they were lifelong veteran late model rivals. Kyle would temporarily take the spot, but in the closing laps the “Larson Line” right on or a bit over the cushion would merge into the wall while the smooth, steady Owens found some grip on the bottom and got back around him.

Kyle predictably continued to roll the cushion/wall dice in his usual entertaining fashion until it finally bit him off the final turn of the race, as the chunky surface sent him hard right and pancaking into the wall with enough force to break something in the rear end. Luckily he was still able to get to the line, but ultimately lost another position at the line.

All in all, finishing among the top five the best super late model drivers on the planet in his very first time out?

Absolutely unprecedented. And personally, another instance of Larson proving any limit of accomplishment I may put on him prior to be not even in the ballpark of accurate. I realize now it’s because there is no limit. On anything he wants to get in and race. None.

After the race I briefly stopped by his hauler to offer a quick congrats and thanks for the battle with Owens being best in show. I was also a bit curious if he learned anything at all in an A Main with most cars stuck in the same lane all race.

That says two things to me. One, he’s always learning, studying and unsatisfied no matter the success. And two, the top tier Super Late Model camp may need to clear out another bunk soon.

“I think we’re going to just see how this weekend goes first, we have a lot of bigger paying Sprint Car races coming up that I’m going to be at so we’ll see,” he stated before the race when asked what the future may hold for this potent Rumley partnership. “Schedules keep on changing, but as long as we enjoy it and we all have fun together, I’m sure that we’ll keep running wherever it fits best.”