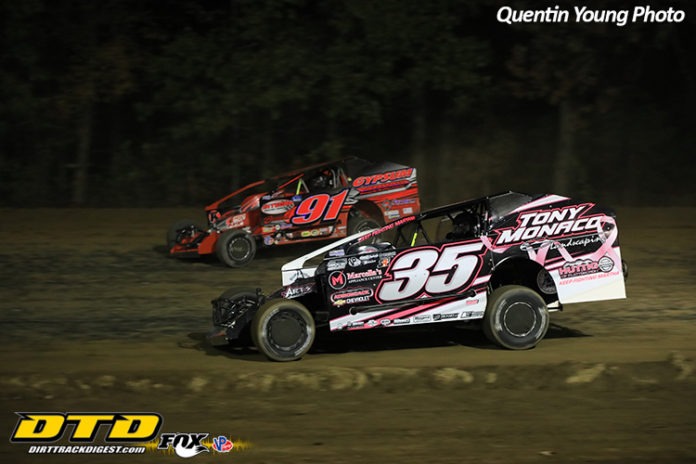 The 2020 season at the Albany-Saratoga Speedway has been good to Mike Mahaney.  Mahaney won the track title, found victory lane before capping it off with a second in the opening night of OktoberFAST for the Super DIRTcar Series.

The driver, originally from King Ferry, N.Y., was solid throughout the 60-lap feature coming from the 11th starting position to score the runner-up position behind Anthony Perrego.

“It’s a good start here for OktoberFAST week,” said Mahaney.  “Malta is kind of our home track now.  We got our car dialed in really good here.  Our redraw was terrible, which is typical for me.  To come from 11th to second with relatively few cautions was great.”

He felt like a couple of better timed yellows and he had a shot at the win with his No. 35 Bicknell.

“They didn’t really fall when I needed them,” cited Mahaney.  “I ran all the way to fifth with no yellows.  From there, they just didn’t fall when I wanted them.   I was just about to get a guy, then it falls.  If I could have got him, then the caution, we’d be in another place.  Anthony did an awesome job.  He was steady.”

He also indicated that he beat his car up coming from mid-pack.  It’s never easy, especially with the quality of cars in the field, to get to the front.  On this night he used his car up to advance early leaving him with little reserve for the end.

“Part of the redraw that kills you is you have to go hard in the beginning,” mentioned Mahaney.  “You can’t save anything for the end.  Which we didn’t.  Anthony ran a nice, steady race and at the end he had what he needed.  He did a good job.  It was a good race between him and Ronnie (Johnson) at the front.”

Johnson Lived and Died on the Top

Any driver will tell you that sometimes being the leader is a disadvantage.  That was the case for Ronnie Johnson on Tuesday.  Johnson started on the pole and ran the entire distance in the high-lane.  Coming to the white flag Perrego was able to get underneath him on the bottom and slide up in front of him to take the lead in turns three and four.  He just couldn’t leave the line that helped him keep the lead nearly the whole race.

“I just don’t know how I could change lanes right there with two to go and go to the bottom,” explained Johnson.  “I ran the whole race on the outside.  Anthony ran a real good race on the bottom. You made your bed; you are going to lay in it.  If it was a 58 lap race, we might have been alright.  I’m proud of our race team that we came here and ran against this field of cars like we did.  I’m happy.  I’ll be more satisfied a couple days from now.  Right now, it’s a little disappointing.”

Johnson only saw Perrego a couple of times which led him to believe his best shot was on the top.

“I ran the whole race on the outside and didn’t see anybody until I saw Anthony poking his nose a couple times down there,” he said.  “I felt like I could hold him off.  The outside went away a little bit on me.  Maybe I overheated a tire a little too much up there.  It was kind of live or die up there.  We came up a lap short.  I felt like that was my race and I let it slip away.”

It’s been an up and down season for Kenny Tremont at Albany-Saratoga.  The veteran driver is always a contender at the Malta oval, but 2020 saw him lose his fair share of good runs to just plain old bad luck.  Fortunately, Tuesday night was on the flip side.  Tremont ran well throughout coming from eighth finishing in the fourth position after having a shot at the win.

“We got to third at one point,” commented Tremont.  “We just got tightened up.  I think we had too much front brake to run the top.  I kept trying to dial it out.  I just couldn’t get it out quick enough to make a difference to stay with them.  I needed to be right on the money to run with them.  On a restart, maybe a get a good lane and take off from there.  We were competitive anyhow.  It was a decent night so we are happy.”

Marcus Dinkins went for a wild ride in hot laps.  Dinkins tumble occurred in turn three.  Luckily he was uninjured in the crash, but his night was over…

Billy Decker set overall fast-time with a lap of 15.528 for the 41 cars in attendance.  Matt DeLorenzo, Decker, Erick Rudolph and Johnson won the qualifying heats.  Matt Sheppard and Ohio invader Rex King Jr., were victorious in the pair of last chance showdowns…

Billy Dunn was running second in the first heat with a lap to go when something broke on his No. 49.  He did not return…

Stewart Friesen started on the front row of his heat but was involved in an incident on the opening lap of the heat after coming together with Marc Johnson.  Friesen ended up racing back to a qualifying spot, but he was not a threat in the main-event…

Pat Ward slowed during the feature to bring out the caution while running in the top 10.  Ward’s car smoked heavily out of the left side…

OktoberFAST continues on Wednesday night at the Utica-Rome Speedway.