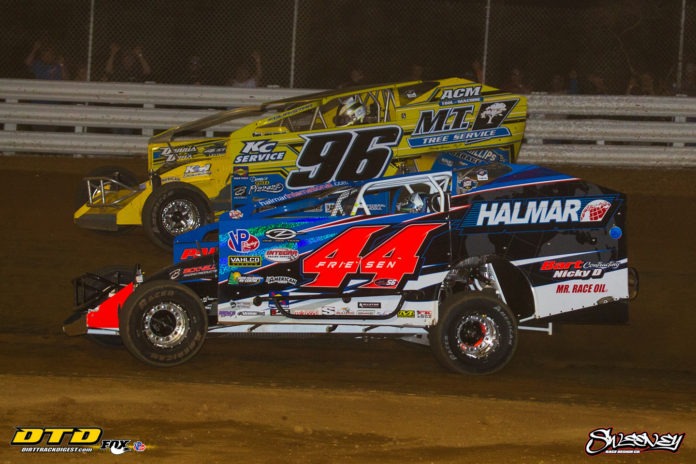 Port Royal Speedway will play host to a different kind of hype this week. Normally known for high paying Sprint Car events, the ‘Speed Palace’ is ready to become the center of Modified racing this Thursday, October 15 through Saturday October 17.

The Short Track Super Series returns for three huge nights of racing capped off by the first ever 200-lap Modified event at the speedway with $53,000 on the line to the eventual winner.

Dirt Track Digest breaks down the weekend with everything you need to know before you head to the Port Royal Speedway.

Only two Short Track Super Series events have been run at the Port Royal Speedway. The 358-Modifieds were semi-regular fixture at the track in its history with Elvin Felty topping the all-time list with 10 career wins. Current racers Billy Pauch, Ray Swinehart and Craig Von Dohren each hold one career win at the track.

In the modern era, both Ryan Watt and Anthony Perrego have graced victory lane. Watt won the series return in October of 2018 while Perrego took top honors in March of 2019.

Stewart Friesen: Literally I could just put his name and everyone would understand he’s the favorite going into this event. He’s won nearly every notably 200-lap Modified race. He’s won multiple times at Super DIRT Week and won last year’s Fonda 200. He’s been nearly unbeatable on American Racers in 2020. He is the odds-on favorite to win the inaugural Speed Showcase 200.

Anthony Perrego: First and foremost, all of us at Dirt Track Digest send our thoughts, prayers and love to Perrego after the passing of his father Tom.  He was a favorite in the pits and will be missed by all of us.  The racing world lost a great man on Tuesday.

If he competes, Perrego is one to watch.  He doesn’t produce the resume that Friesen does, not many do, but he’s been good since a mid-season switch to Bicknell cars. He’s heating up at the right time. He nearly won the 2019 edition of Super DIRT Week and led the Centennial Race at Orange County Fair Speedway before a part failure ruined his day. Plus, he’s the only driver in this category to win at Port Royal. He’s due for a career defining win.

Matt Sheppard: The 2020 season has been full of ups and downs for the overall grand champion from a year ago. Sheppard is really good when he’s on, and struggled when he’s off. Luck just hasn’t been his thing in 2020. Like Friesen, he’s won nearly all the big 200 lap events. His team has experience and that matters in 200 lap races. He’ll be near the front of the 200 when the checkered falls, if not the winner.

Mat Williamson: No one had a better 2019. Williamson won just about every major money event on the schedule that he entered including the Centennial Race at Orange County and Super DIRT Week. The only thing holding him back in 2020 is the lack of races. He raced a lot, but hasn’t had the opportunity to run on the Short Track Super Series as much as Friesen and Sheppard with the border restrictions. The Super Team, Dream Team or whatever other nickname they’ve been given, will be ready on Saturday to go for $53,000.

Billy Pauch Jr.: Like Sheppard, it seams like 2020 is either feast or famine for the Frenchtown, N.J., native. When he’s good, he’s really good, but when things go bad, they go really bad. Pauch doesn’t have the resume in big races to go with the likes above, that’s why he’s in this category. He’s been phenomenal on the Short Track Super Series in hanging with Friesen. It wouldn’t be a complete shock to see him finally get a big win for the resume.

Erick Rudolph: Rudolph’s season started off decent with a $10,000 win at All-Tech Raceway. From there he’s won a handful of events all over the Northeast from the BRP Modified Tour, to 358-Modifieds to big-blocks. He’s legit won in every engine combination possible. Like Pauch, he just needs some luck and the big check could be his on Saturday night at Port Royal.

Ryan Watt: Watt is coming off a tough weekend at Big Diamond Speedway that saw him involved in a scary wingless Sprint Car crash. Thankfully he walked away without major injury. Watt is the only other driver in Short Track Super Series competition to win at Port Royal besides Perrego. If things go right the 14w will be at the front, especially if Port Royal goes to the wall. That’s a line Watt excels at.

Larry Wight: Wight is a perennial front runner with big race experience and big race wins. He’s still searching for a Short Track Super Series win, although he’s been close. What better way to breakout of that funk than to win the biggest race of the 2020 season? He’s got a solid crew behind him that knows what it takes so it’s hard to count him out when the money is on the line.

Jeff Strunk: He’s won the Freedom 76 a record eight times in his career with his last coming just a few weeks ago. His team made the switch to Bicknell race cars for the second half of the season and it’s worked. He recently won the final 358-Modified feature at Big Diamond Speedway as part of the Diamond Nationals. It wouldn’t be a complete shock to see the 126 in victory lane at Port Royal.

Billy Decker: Decker has a resume that is as long as I am tall. He’s pretty darn good in 200 lap races. He was a solid finisher in the Fonda 200 a year ago and a former winner of the Outlaw 200 and at Super DIRT Week. He’s a veteran that knows how to keep his equipment together for the long haul. That matters.

Danny Bouc: Who says you need a big trailer to win races? Bouc is coming off a championship season at the New Egypt Speedway and won their All-Star Cup Shootout 100 last weekend. Momentum is rolling for Bouc right now and sometimes that’s all it takes. He’ll need some luck and at times that hasn’t been on his thing in 2020. A win at Port Royal could change all that in a flash.

Mike Gular: Gular doesn’t have the big-block experience some of the others have on this list, but his 2020 has been solid. He nearly won the Short Track Super Series North Region title and he did just cap off the season at Big Diamond with a title and a win in the Diamond Nationals finale on Saturday night. He looked good and was on point in the big-block. If he can carry that over to Port Royal the Terry Fasnacht owned team has a chance at Saturday glory.

Mike Mahaney: He didn’t win during OktoberFAST, but he should have.  Mahaney is currently on his game.  As stated, momentum is important and there is no one riding momentum more than Mahaney.  He has handful of big wins, a big win at Port Royal isn’t out of the question.

Drivers will draw for starting positions in qualifying races during the pre-race drivers’ meeting on Friday, October 16. Qualifying Races will be 20 laps in distance. B-Mains (15 laps) will set the remainder of the field on Saturday, October 17 prior to the ‘Speed Showcase 200’ $53,000-to-win event.

The top-four finishers from Thursday night’s STSS ‘Speed Showcase 40’ will start no worse
than 13th, 14th, 15th and 16th in the ‘Speed Showcase 200’ main event on Saturday. These drivers can better their starting positions by participating in Friday night’s Qualifying Races.

Car counts will determine the number of qualifying heats to be run on Friday night.

A total of 40 cars are slated to start the feature event.

The race is 200 laps. Under green, all laps count. The first three (3) laps will be scored under each caution period through lap 190. Drivers may only lose laps under green-flag conditions. A driver will not lose a lap under caution.

At lap 100, a yellow/red will be called for 10 minutes. Cars staying on the track will be permitted to refuel, adjust tire pressures, re-apply tear-offs ONLY and will maintain their position. Cars heading to the Hot Pit area may change tires or make other adjustments but must start behind the cars remaining on the speedway on their respective lap.

Dirt Track Digest TV will cover all three nights of the action at the Port Royal Speedway. Single day passes are available as well as a three-day combo pass. Thursday is available for $24.99, Friday is $19.99 with Saturday costing just $39.99. A three-day pass is only $74.99. The broadcast will have multiple cameras, commentators and interviews all night long.