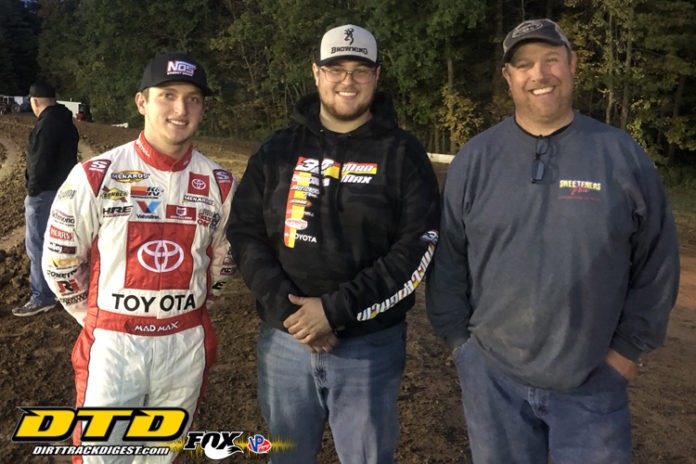 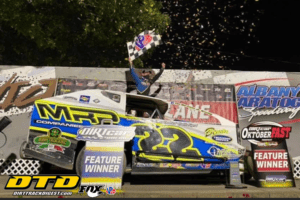 This season has certainly been one for the books.  Thankfully the people that run the racing programs have made every effort to bring some form of racing to the fans who have waited patiently for racing to resume.

This is the time we would have spent the week in Oswego for Super DIRT Week but that didn’t happen for the first time in the history of the event.  The folks at DIRTcar came up with a six day race series at six different race tracks, OktoberFAST began at Albany Saratoga with nearly 130 cars in three divisions, Modifieds, Sportsman and Pro Stocks.  The winner at Albany Saratoga was a track regular, Anthony Perrego of Montgomery, NY and in Sportsman, Tim Hartman was the winner with Pro Stocks won by Nick Stone. 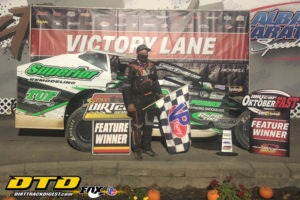 We spoke with a few of the competitors before the show got underway at Albany Saratoga and our first stop was with David Schilling who was on hand to watch because he has a small block only.  Schilling only planned on running the tracks running small blocks.  Looking ahead at the two small block shows run at Fulton and CanAm we see that David qualified for both shows, something that was not an easy task with all the tough competition.


We also spoke with Vic Coffey and his son, Kyle who was at Malta with their No. 32c Modified with Max McLaughlin behind the wheel.  Before the show the trio was looking at the track surface to plan their night of racing.  Vic is a former SDW winner of the 200 on the Moody Mile in 2002 and 2007.  We asked him if he missed driving and he said, no.  And also said he thought the six day show put together by DIRTcar was an interesting concept.  The team ended the week on a positive note, Max won the feature at the Weedsport finale event on Sunday.

Next was Michael Maresca, 2020 Fonda and CanAm Track Champion who had just won at Lernerville the previous week and was happy with that and the rest of his season so far.  He was looking forward to the six nights of racing. 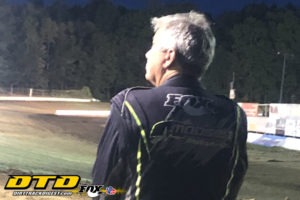 We next talked with the most winning Modified driver with a total of 919 wins in his career who had returned behind the wheel for the six night events.  Brett Hearn said everything felt good being behind the wheel of his familiar No. 20 and that he didn’t feel rusty at all.

As many may know we have written many times about DIRTcar CEO, Brian Carter, and the job he does.  We think we need to share something with all that may read this.  On Tuesday when we stopped by the pit area of Brian who was driving his No. 6 Pro Stock that night we spoke with him about the loss of Ed’s brother, Rich and he relayed how deeply it affected him.  Brian Carter came into our lives a few years ago and for us and brother Rich we have long know he is the real deal.  We would like to thank Brian and all his people  for making this week happen.

We also want to mention the great coverage from DIRTvision, from hot laps to the final checker flag at all shows.  Unfortunately we were unable to watch all six shows because of the severe damage that was done by the storms that hit our area on Wednesday.  We lost power, cable and wifi and that put the damper on any DIRTvision broadcast for a couple nights.

With six nights scheduled only one was lost to rain and that was Utica Rome.  Wow, can Bill and Kim Shea ever get a break.  It seems not.  With five nights that ran the average was 170 race cars per night.  Any track would be happy with those numbers.

Two local competitors did end up being winners in another way during Oktoberfast.

This weekend the Short Track Super Series moves to Port Royal, PA for the Speed Showcase 200 and $53,000 to win event.   As of this printing there were 55 Modifieds, including 13 track and series champions.  The Sportsman pre-entry list features nearly 70 for the Speed Showcase 50.  We plan on watching on DTD.TV.

Closer to home this Sunday, October 18 Albany Saratoga is holding the fifth annual Elmo’s Speed and Supply Swap Meet, 9 am to 3 pm.  Vendor set up available at 8 am.  Call 518-429-4746 for details and fees.   This event was originally scheduled for Saturday but rescheduled to Sunday due to weather forecast.

Lost Speedways at the Saratoga Auto Museum, cancelled due to Covid-19 pandemic restrictions.  Originally set for Saturday, November 28, 2020 the popular program will not be held this year.  “We were hoping that the State of New York would increase the number of visitors we may host at one time, but it appears they will be sticking with 50 patrons at least through the fall,” said Ron Hedger, the racing curator for the museum.  “We always have a full house for Lost Speedways and we’re not about to turn loyal supporters away.”  Hopefully things will be back to normal for 2021.  In the meantime racers and fans can visit the museum to see the Golub and Dammerman Galleries exhibit, “Dyson Racing-The Private Collection,” that features antique cars from Rob Dyson’s past.

In closing we send our condolences to the Perrego family on the loss of their father, Tom.  Thoughts and prayers to everyone that knew him.