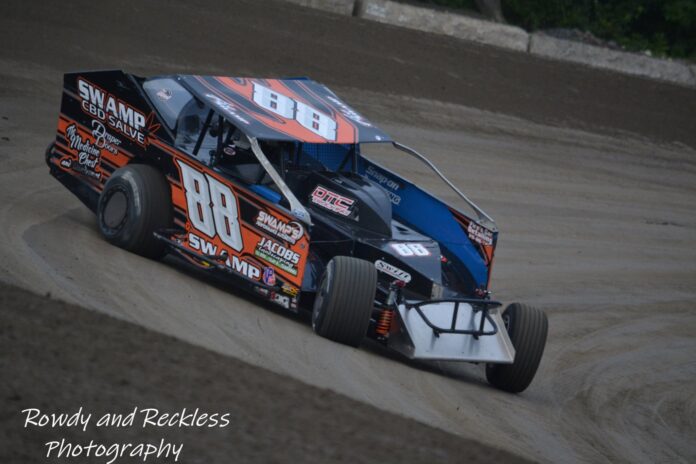 By BOB LACELLE – CONTRIBUTING COLUMNIST
In this part of the Northeast we in the dirt track racing game all know and enjoy racing at Cornwall, Brockville, Can-Am and Airborne. It is a well known fact that a ton of very good racers come from Hogansburg, N.Y.  Legends like Billy Cook, Tommy Jock and many others have been the very talented and entertaining drivers to watch at these tracks.  Now, there is a young man coming out of the Hogansburg area who is making lots of noise and making an assault on the Sportsman class and he is the real thing.  This is Fire Swamp.
This 15-years-old, 10th grade student at Massena Central School has been around racing for a while. He worked at Mohawk International Raceway as a flagman, and because of his family’s racing history, he is well versed in the racing game. After talking to this young man, it is obvious that he is going to be a serious contender in the DIRTcar system, no matter what class he runs in.
Fire has told me that he is looking to spend another year in Sportsman and by the age of 16 he would like to jump to the 358’s. He also mentioned that by the age of 18 his goal is to be behind the wheel at a big-block car to take on some of the biggest names in the sport. His full steam ahead attitude is very impressive.  I asked the young Swamp if a Sprint Car would be something that he might be interested in, his answer was, ”maybe if I get good enough I might try it.”
We talked about experience as well.  He told me that he never drove anything else.  No go-karts or any other car in any class.  He just jumped into the Sportsman and BANG.  There he was a winner. In his first race at Can-Am Speedway in LaFargeville, N.Y., young Fire (then only 14) finished second in the feature. The second time he raced at Can-Am he came away with the feature win.  That is very impressive for any driver, let alone a 14-year-old.
Fire has only been racing for one season and all together he has won seven features. He won three at Can-Am, three at Brockville Ontario Speedway and one at Airborne Speedway in Plattsburg, N.Y. At Cornwall’s big show last season he came home in 13th place in a stellar field of drivers while battling for third place.
I asked him where he got his inspiration for racing from and he quickly responded that his family and his love for the sport.  His uncle Jody and his dad Jim Swamp both raced at Mohawk and Fire is following in their foot steps and doing a great job.  I believe this young man is a natural as some people just have it, like Tony Stewart and Kyle Larson and a few others.
He has the support of many people in his endeavor. His crew-chief is Louie Jackson, well know in the Hogansburg area and in the racing community.  He’s a class act. His dad Jim Swamp and his mom Misty Swamp along with Mike Sibling are all on the team to help him along.
This coming season, the Swamp Race team will be fielding a brand new 2021 Bicknell Chassis. It will be powered by a new DIRTcar legal 602 GM Crate Engine.  The new car was being built at the time that I spoke with Fire. I could hear the excitement in the young man’s voice, he was so very proud of his new ride.
Fire has mentioned to me final details for the sponsors that he had from last year are still being finalized, but it looks like them will be back this year along with a couple of new ones. The sponsor’s list looks like this: Swamp CBD Salve, Draper Doors, The Medicine Chess, Mohawk Plumbing, Jacobs Landscaping, CKON Radio Bingo, The Laundromat, No. 9 Propane, Action Race Parts, DTC Trucking, Mohawk Market, OCR Gaz Bar and new possibly new this year, F.X. Caprara and Riley Ford. The last two are still in the final stages.
Team Swamp will be at Mohawk and Cornwall for sure this year and then try to make it to Brockville and Airborne.  He will be chasing the points. I would imagine that the two Quebec tracks, Granby and Drummondville might get a look at him as well.
There is no doubt that he will be a contender in the run for the Championship, the others should be paying attention.
His number 88 will have the same colors as last year, orange and black, but with a little different scheme from last year.
I must confess that I have not seen this young man race due to Covid restrictions, but from what I am told and everything I have read about him, this young man is for real. Some drivers just have it. For him to jump into a car and win right off the bat should be enough to tell you that.
Fire Swamp is someone to watch. I am hoping this season I will be able to see him live and in person.  I feel cheated that I did not see him last race season.
In closing I would like to say that this young man has everything going his way, and just think, Fire Swamp, if that name don’t say race car driving nothing will.  It’s a great name.  Think of the neat names in racing like Lake Speed, Pancho Carter and a few others, names you don’t forget.