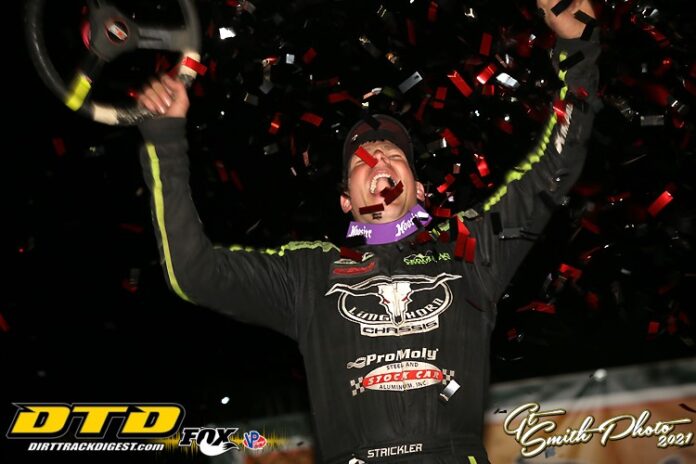 Racing is one of the few sports where participants have the opportunity to compete against their heroes.  Unlike other sports, careers simply last longer.  It’s a sport, that in most cases, the wear and tear on the body doesn’t result in early retirements.

In the Saturday night finale for the Sunshine Nationals at the Volusia Speedway Park, Kyle Strickler got to race with, and eventually beat, his hero Scott Bloomquist.  The 37-year-old driver was able to hold off the Late Model Hall of Famer to score his first ever World of Outlaws Late Model Series feature in the 40-lap affair.

“Scott and I are pretty tight,” commented Strickler while still smiling after the win.  “I look up to him.  He’s like my hero and the greatest of all-time.  To get my first World of Outlaw win and outrun Scott is something that I’m going to remember for the rest of my life.  It’s super special to me.”

Strickler had little time to get nervous and clam up in the final laps as he was forced to focus on hitting his marks.  He was under constant pressure during the conclusion of the race from Bloomquist.  He stayed right with the Strickler forcing him to not make any mistakes.

“It actually kept me pretty occupied,” cited Strickler when asked about the pressure from Bloomquist.  “Instead of counting laps down I was more worried about making sure I didn’t screw up and where Scott (Bloomquist) was at trying to break his momentum.”

Strickler was able to keep Bloomquist at bay by changing his line in turns one and two.  For most of the distance Strickler pounded the cushion all the way around the fast half-mile.  In the late stages he made an adjustment moving his Longhorn No. 8 to the inner groove in turns one and two.  That was the same line that Bloomquist was using to try and make a pass for the lead.

“When I saw Scott there, I knew I just had to hit my marks, not screw up and we’d be alright,” stated Strickler.  “It was starting to clean up down the backstretch and take a little bit of rubber.  I was just trying to break his momentum there in one and two, then rip around the top of three and four.  I figured he was on the top or in the middle in three and four.  He said he was running the bottom and it was pretty good down there.”

Strickler knew good things happen when you put yourself in the right position.  He had done that all weekend long at Volusia with a third on Thursday night and the win Saturday.  In the Saturday finale he set fast-time, won his heat and was fortunate enough to draw the pole for the main.  He’s grown a lot since his days in the UMP Modifieds which also helped him find enough to get the win.

“When you put yourself upfront, I knew these opportunities would come,” he said.  “You just have to mentally run these races so much different than the Modified (UMP Modified) races.  I think that I’ve grown so much from a Modified racer to a Late Model Racer.  I’m making the right decisions on the race track and not losing my cool when I get put in pressure situations.  I’m keeping it in one piece, not knocking the deck out and ending up in the winner’s circle.”

Besides being a champion in the UMP Modifieds, Strickler had years of racing in the Northeast in big-block Modifieds.  That was another key point he was sure to make.  Running the Northeast Modifieds allowed him to become the driver he is today.

“(Tim) McCreadie and I talk about that all the time,” mentioned Strickler.  “Those things, they just don’t drive good.  I think that’s why you see so many guys come out of them and when they get into something that actually does drive good, it makes you really appreciate what you got.  You can actually manipulate the racecar a lot more.

“I look up to McCreadie a lot too, we have similar backgrounds and him and I can communicate on the same level because we come from the same background.  We know what these do compared to the Modifieds.”

He indicated that he’d love the chance to get back in a big-block at some point in the future.  He’s talked to several people recently to try and find a ride to run a few races.

Not only did he cite past experiences to helping find his way to victory, Strickler did have a little luck Saturday.  He was fortunate the race ended when it did.  His right rear tire went flat while his car sat parked on the frontstretch in victory lane.  The tire held on just long enough for him to get the much-needed win.  Something that didn’t happen last summer when he came up a lap short at the Eldora Speedway in a $50,000 to win event.

“The right rear was flat on the frontstretch,” commented Strickler.  “I think that was a little bit of that Eldora karma coming back.  The racing gods gave one back to us.  It feels a lot better to be flat in the winner’s circle than it does to be flat a lap short like at Eldora.”

With a win and a third he became the Sunshine Nationals Champion.  With that in his pocket, he’ll now shift his focus as he heads back to the shop to prepare for the Lucas Oil Late Model Series events in Florida in the coming weeks.