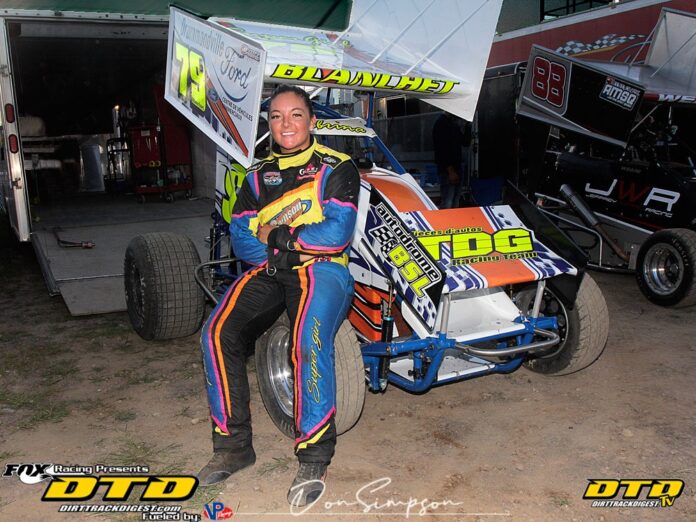 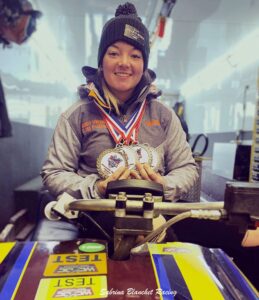 We have all seen one of those racers that seem to catch your eye.  Her signature long hair flowing out of her helmet as she takes the checkered flag has been well witnessed by many fans in the racing world, most notably on ice. Her name is Sabrina Blanchet. However, don’t let her good looks or gentle demeanor fool you. This young racer from Drummondville, Quebec is one of the toughest racers you will find anywhere. This 24-year-old has won mutable championships along with world championships in the snowmobile racing world over the last decade.

Sabrina, however, has not limited herself to just racing on ice. Sabrina has also taken to racing on the dirt ovals. For the past ten years, the three-time Canadian REVER-STR series champion has worked her way up through the racing world both on ice and dirt. 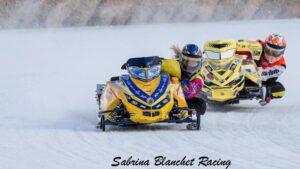 Blanchet got her initial racing start back in 2004 at the tender age of seven. The fact is Sabrina has been around racing her entire life as her father Rejean Blanchet raced Grand Prix Hydroplanes for many years. Another simple fact is that Sabrina’s grandfather, Gaston Ferland, is one of the greatest Quebec snowmobile racing legends of all time. It was only natural for Blanchet to migrate to racing –it’s in the family blood. 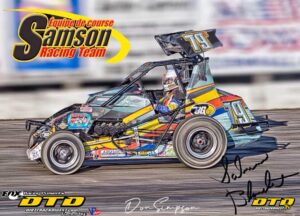 From her first race, it was clear the young Quebecer had the drive and talent to win even at the age of seven. After a few years into her racing experience, her grandfather introduced her to George Samson of Samson Racing, the rest is history.

I asked George what he saw in this young driver. “She started in about 2004, approximately 17 years ago, and what I first saw was someone who wasn’t scared and liked to go fast. She also listened to what I asked of her. In doing so, it was easy to get her to go faster and to win.” 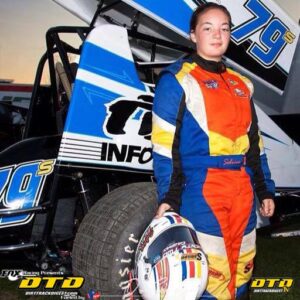 For the next decade, Sabrina worked side-by-side with George, listening to what she needed to do to win. This teamwork was a real winning combination as the championships began to pile up.

George said, “I helped to mold her into the racer she is today” and her total championship wins acknowledge this.”

The combination of teacher and racer has created one of the best drivers in the history of racing on ice.

In 2013, Sabine added dirt track racing to her resume. She began racing in the STR series throughout Quebec and Ontario. 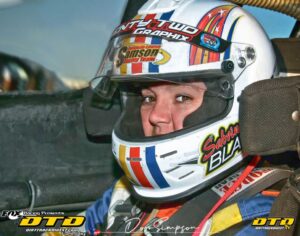 Sabrina was now racing year-round with little to no downtime.

In 2015 Sabrina stepped up into the Lighting Sprint division, something that resembles her snowmobile racing as these cars are fast and nimble. She also continued to race in the STR class.

With the COVID-19 in 2020, Sabrina’s Dirt racing was limited to just a few races. However, she did get most of her winter series before the restrictions. 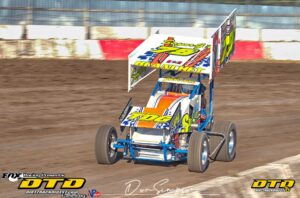 These past 10 years for Sabrina have seen many high notes, but like all drivers, she has had some low points in her career as well.

Sabrina came close to having her racing career come to an end in 2014 during a practice run at Valcourt Quebec.

The Grand Prix at Valcourt is one of the biggest races of the season for snowmobile racing. The mishap happened during a Thursday open practice run. The snow machine’s main drive belt exploded at high speed. This sent the then 18-year-old racer into the outside wall of turn three. Sabrina sustained some serious injuries and was transported to the hospital in Sherbrooke, Quebec. Sabrina sustained a broken back, broken pelvis in four places, a broken ankle along, and a broken toe.

The injuries from this accident took some time to heal, but because Sabrina is in such good physical shape, she overcame those injuries relatively quickly with little to no long-term consequences.

It’s been almost seven years since that crash, but for Sabrina, it’s like it never happened. She is focused on the upcoming 2021 season. This year will present a new challenge as she will be competing in the Sportsman Modified division if health regulations allow racing to happen. As for this winter, the entire snowmobile racing season has been postponed until 2022.

The future for this amazing racer is bright. Sabrina’s first 17 years have proved noteworthy and the next chapters of the history book may even be more notable. Only time will tell.