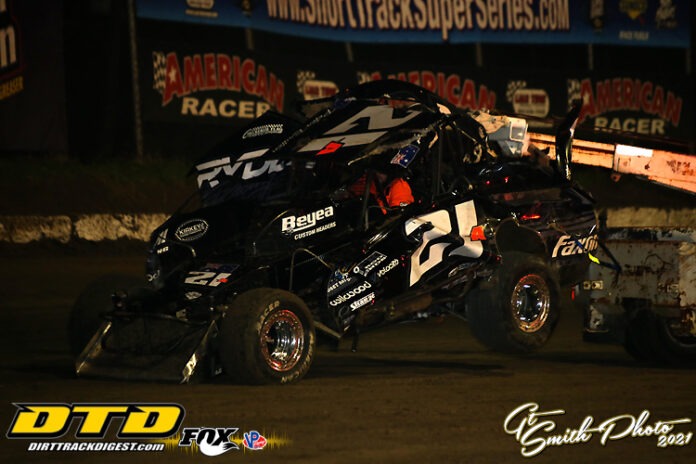 There is definitely a new look for Australian native Peter Britten this year.

Standing in front of his black 21A it was evident that not only was there a totally different graphics package, but also a new chassis surrounding the driver.

Britten said, “I have been here for 10 years and have never driven anything else other than a Troyer. Things were just not going as good as we wished they would have been and everyone else is on the bandwagon. I have never been one to jump around, but figured we went with what everyone else was going with.”

Loyalty has been big with Peter as he explained, “I am grateful to Troyer for what they did for me for all those years and I hope they feel the same way about me.”

Sliding into the Bicknell for practice at Bubba was a bit different as Britten explained, “I wasn’t sure what I would feel, but I was comfortable. The Bicknell did drive a bit different, but it’s gonna b e good. Hey, a lot of others are driving the exact same car.”

Bubba is something new as Modified drivers simply haven’t experienced this track before.

Britten said, “The track is different and was almost like sand. It sort of has a Fonda shaped to it. It’s challenging and the surface appears that it could be abrasive and wear on tires, but every track is different.”

The color change was a last minute decision as Peter said, “We didn’t know what to do with it so we brought it down here. Many people seem to like it. Maybe we will keep it. We will see.”

Well, when the Northern season commences Britten will be running Albany-Saratoga on Friday and then the Super Dirt Series as well as some Short Track Super Series events, but noted, “We will run where it makes sense and take it as it comes along.”

Britten started out the night winning the first heat of the 2021 Modified season and drew six among the top ten for the outside third row starting spot.

From there, things took a terrible turn.

The first lap wasn’t even three quarters of the way to completion when fans saw the 21A high above the backstretch fence with the nose pointing down. The car came to rest upside down in the third turn and fortunately Peter escaped uninjured.

His night, and maybe his week was over.

Standing on the hauler ramp, looking at the pieces and parts of what had been a sparkling new race car Britten talked about what happened.

He told Dirt Track Digest, “I really don’t know what happened. I didn’t get off to the fast start and in the backstretch someone just railed me. I felt someone smash into my left side and I went tumbling.”

Continuing he noted, “We just finished the car just before we got here and the frame is gone as well as all of the bolt on stuff. It is destroyed.”

Peter noted, “We are really not sure what we are going to do. We just don’t know at this point.”