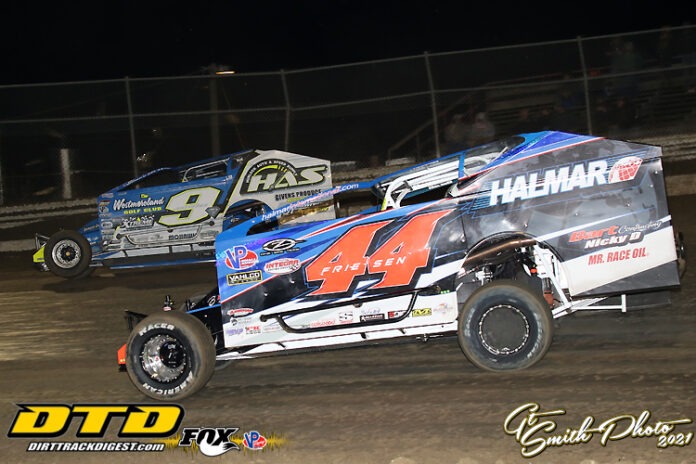 Erick Rudolph, Matt Sheppard and Stewart Friesen put on quite a show for the fans at Bubba Raceway Park as the Short Track Super Series kicked off the year with its 100th feature ever.

So as the new year started Rudolph picked up where he left off and started the 2021 campaign with $5,000 in his pocket.

He led, fell to second, led again, was passed again and won.

The pass for the win came on the 26th lap as he got by Friesen and then began to weave his way through traffic.

In the end it was a six tenths of a second win for the Ransomville, N.Y., driver over a fast closing Sheppard.

It was a wild green to checker 35 lapper.

Standing alongside his car pit side the winner said, “I can’t complain. I just started moving around during the race. I had feared the top was gone, but it was fast enough. I had to go where they weren’t and decided to try the top side. It is the first Modified win of the 2021 season and that is great. This is a unique track.”

Matt Sheppard finished the race strong with a runner-up finish, but he was shaking his head over his performance.

Reflecting on the feature, he said, “It was an adventure out there tonight. At times I felt I had the fastest car out there and at other times I felt I was the slowest car on the track. It was like ice skating and there simply was no consistency out there. It was frustrating.”

Friesen was up front early as he exchanged the lead with Rudolph, but settled for third.

Looking back at his night he noted, “It was an odd race. We made some drastic changes to the car after the heat and now we just need to regroup for the rest of the week. We needed to be consistent and it was tough trying to move around. I guess the surface is a bit like All Tech and East Bay so we need to adapt to it.”

Max McLaughlin rallied for a fourth place finish, but the end result might help him later in the week.

“It was just too tight and it was hard to hustle it around. As I started to lose fuel it helped the car. In fact, my fastest lap of the race was the 33rd and I think we learned a lot for the next two nights.”

Michael Maresca debuted in the Gary Simpson ride and though he starting 18th, he came home fifth and noted, “I felt pretty good, but there really wasn’t a lot of passing out there. These guys gave me a good ride and I just made too many mistakes. Mentally I need to get more on my game and cut down on the mistakes.”