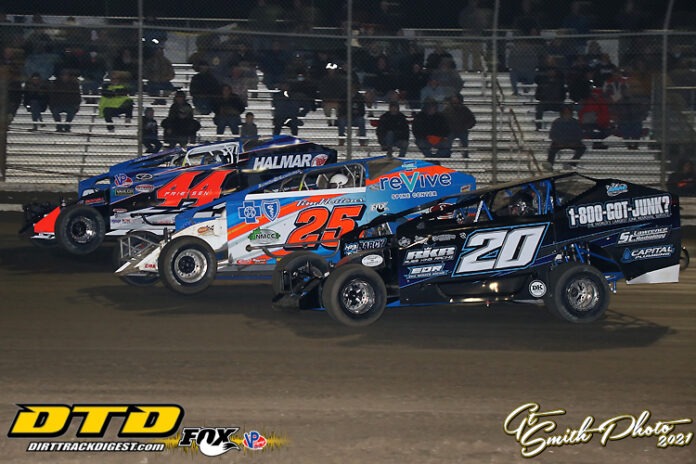 Stewart Friesen, Mike Maresca, Erick Rudolph, Max McLaughlin and Billy Decker were the survivors who filled out the top five on night two of the Sunshine Swing at Bubba Raceway Park.

Friesen and Rudolph put on a show with restart after restart setting up side-by-side to power into turn one and the fans (sometimes the drivers) having no idea where they were going when they got there.

At one point Friesen had fallen back as far as eighth as he stumbled on a restart, but he rallied from eighth on the eighth lap to first on the 14th.

Rudolph forced Friesen to regain the lead three more times after the 14th lap as the top five was up in the air until the field crossed under the checker.

In falling back several positions, Friesen said, “The tires got dirty and I started to roll the top. The tires would then clean themselves off. The bottom was a little slick between three and four, but I went to the top and simply put the hammer down. It is really exciting to run with Erick. It feels good to get one here.”

Maresca was the runner-up and came home with his second top five in as many days. He said, “It was a good car tonight and I have to thank Gary and Blue Hen for allowing me to drive it. It was a good race and I was able to make adjustments in the right direction. We started a bit in the back, but being able to drive to second was satisfying. I dug a hole for us in the heat with a bobble, but I feel pretty good at what we were able to accomplish tonight.”

Rudolph filled out the podium and noted, “This track has a lot of character and there were a lot of restart tonight where I was able to lead some laps and put myself in a good position and a good place. This is a tricky track that changes from lap to lap and I really don’t expect it to be any different tomorrow night.”

McLaughlin wasn’t very happy with his second top five of the week. In discussing his fourth place finish he said, “It was horrible. The car was ridiculously tight and we don’t know why. I was considering coming in earlier in the race.”

On the restart where several cars piled up behind him, he explained, “I just couldn’t get a grip on the track and someone hooked me. It was a decent finish.”

Decker had gotten to as high as third at one point, but settled for the fifth spot.

Billy said, “This place is entertaining. It was a battle to get up to third and tight racing all night long. I sucked bad on one restart and thought I could get third, but that did me in. It was a case of too little, too late for us. We started 18th and I would have to say with all the yellows tonight it was a big aggravating.”