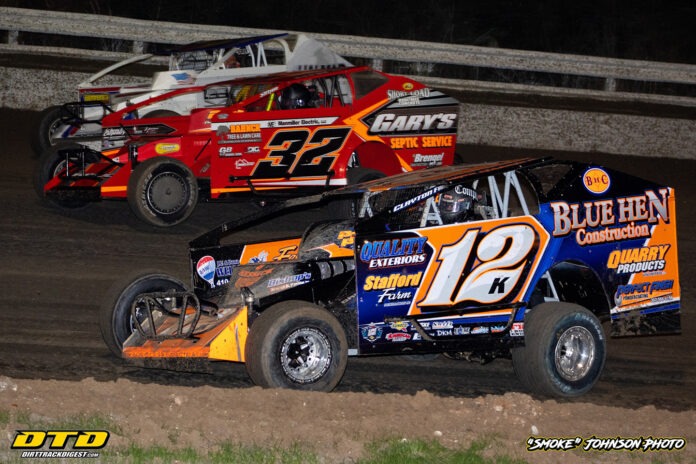 For the vast majority of his racing career, Mike Maresca has been aboard his family-owned, black and orange No. 7mm. In the past two seasons, Maresca has experienced a rapid climb in the Modified ranks, quickly building up a stout resumé consisting of the 2019 Outlaw 200 win at Fulton Speedway, and a pair of track titles at Can-Am Speedway and Fonda Speedway in 2020. With added success comes the opportunity for seat time in other cars, and at Bubba Raceway Park, Maresca took his first laps in the Gary Simpson Racing No. 12K.

On Thursday night, Maresca’s maiden start with the car saw him drive from eighteenth to fourth, before ultimately settling for fifth in the 35-lap feature.

“This car was really, really good all feature,” Maresca said. “There didn’t seem to be a huge amount of passing out there, so to pass that many cars in a short race without any cautions shows how good we were. First race of the year, so I was making a ton of mental mistakes, I think if I clean them up we’ll have a good shot at wins this week. We aren’t going to be changing a ton on the car either because I feel like we’re pretty close right now, so it’s just up to me to drive the thing.”

Maresca’s normal rides are the relatively standard package. Bicknell chassis, coil suspension on the rear end, nothing different than the majority of the field. However, the Simpson #12K is drastically different. A DKM chassis fitted with a four-link suspension meant Maresca’s mount was one of a kind in the field. The four-link suspension was barred from DIRTcar competition early in 2020, but is still legal in the STSS world.


“This thing is absolutely killer,” noted Maresca. “DIRTcar has a much stiffer rulebook than Deyo so it’s hard to get as creative, but here in the Short Track Super Series, we can use our brain to build some different stuff. It’s really cool to be a part of something this unique and a team trying something different. I’ve had a ton of fun working on this car because I’m doing things I’ve never done on a Modified. It’s not the same old same old, so it’s fun to be a part of this team.

In all, Maresca’s unique ride proved to be fast, especially in his first night behind the wheel. Having a one-off car means Maresca doesn’t have anyone else to bounce ideas off of, but certain handling characteristics of his car means this isn’t as big of an issue as it could be.

“We’re definitely close, I missed it a little in the black but we were good when there was bite,” stated Maresca. “It’s tough because we don’t have a notebook, but the things I feel like we’re lacking on should be a relatively simple fix. The no-notebook deal means we have to use our brains and some science and physics to make the decisions, but that’s all the fun in this experience. Overall, I was surprised how good this thing drove. I never got super tight, I could always turn out of a push because the front end stuck. I was worried with so much rear grip that the front end wouldn’t hook that well, but it drove nice and smooth. A major reason why many talked down on a four-link is because the rear has so much grip that it will overpower the straight-axle front end of a Modified and just push, but I don’t think this car will struggle with that.”

Maresca and the team concluded the ‘Sunshine Swing’ with a impressive runs onto the podium before a seventh finish in the finale.