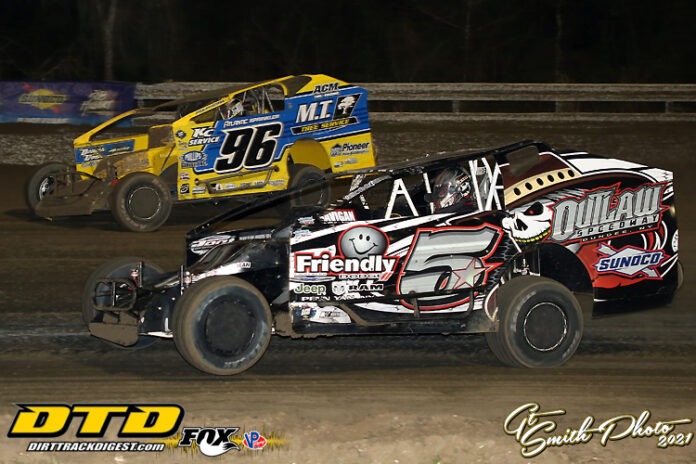 Opening night of the Sunshine Swing at Bubba Raceway Park didn’t go according to plan for Tyler Siri.  The second night didn’t well either.  Fortunately, he lucked turned on the final night.

“You have to learn to run the race track and with wrecking the first two nights this was the only night I really got to run the feature and gain track time, “ said Tyler Siri after driving to a fourth place finish on the final night of the latest edition of the Sunshine Swing at Bubba Raceway Park.

Siri had brought his three car team from the Finger Lakes of New York State and was joined by his son Jordan and the veteran Danny Johnson.

On the opening lap of the feature Tyler was unable to finish the first lap as he got caught up in the Peter Britten chaos.

The five-star was heavily damaged.

Siri said, “I could have been worse, but we lost a radiator, shocks, shock towers, wheels and a pannard bar. Luckily we had all the parts we needed with us.”

Of the accident he explained, “I just came into it as Peter (Britten) was wrecking and flipping. Fortunately I was able to turn the car at the right time so as not to t-bone Peter. I just didn’t have enough time to miss it.”

Night two went better, but was still not very good.

On 12th lap a massive pile up in turn one of the main-event saw 11 cars pile in, but the only one going off on the hook was Siri.

He noted, “Damage was bad, but not as bad as the first night.”

So in two nights he had less than three quarters of a lap in the first feature and just 12 on the second main-event.

He said, “You just can’t figure this track out in just two or three laps. It is greasy.”

In regards to the final night he was behind the eight ball from the very beginning.

Tyler explained, “We had put new shocks and springs on it and missed hot laps as I was spending most of that time scaling the car.”

He went out, won heat number two, drew the pole and was in the best place he had been all week.

Tyler was the leader on the 10th lap, but by 20 had fallen to sixth.

He started making moved in the closing laps as he moved in on Mike Maresca and Matt Sheppard. The trio ran tightly together, but Siri found a spot on the high side.

As the laps wore down he found himself passing Sheppard and came home fourth.

Tyler said, “I was able to blow by Matt on the high-side. He is a great competitor and it felt good to have a good car under me after spending all week long fixing it.”

Siri will be following the Northern Short Track Super Series during the 2021 season as he explained, “I own four Big/Small Blocks and that is what we run at our track (Outlaw). I just don’t have the engines or time to run the DIRTcar series.”

Outlaw, of course, will host an STSS show and Siri says that it makes a lot of sense.

Explaining the decision he said, “It’s actually pretty easy. The Super Dirt Series is $11,000 more and Brett usually has 18 or so more cars. I get the same crowd for each, but I get a bigger pit and there are considerably less comps than DIRTcar.”

Tyler is excited about the upcoming season and noted, “Jordan (his son) and Danny and me had top three finishes last year at Outlaw and we are looking forward to another good season.”

However, before the Northern season commences Siri would like to fare well at Bubba as it will be his only appearance in the Sunshine State this year.