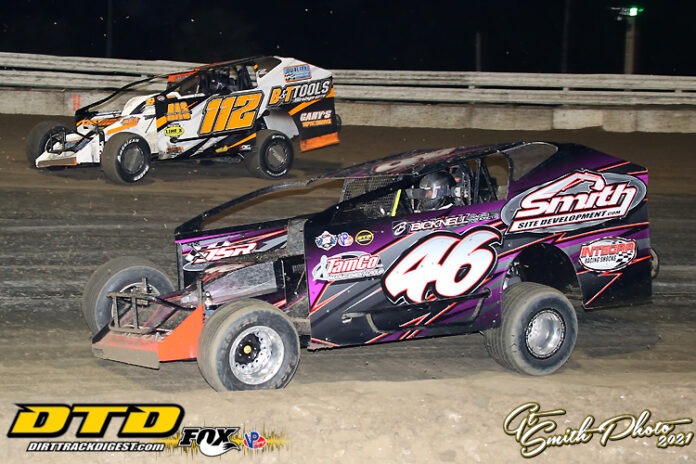 Hello folks as I know it has been a long time since my last article but I talked myself in to doing one again and see how it goes. I have had a couple of inquiries on when I might write again and always said I didn’t know and I am sure most haven’t missed it anyway.

On Sunday January 24 Afton Motorsports Park promoter Ron Ford and I headed to Ocala, Florida for the upcoming Sunshine Swing which is part of the Bob Hilbert Sportswear Sunoco Short Track Super Series (STSS). It was going to be a four race day series with a practice day before the series would start. Both the STSS Modified and Crate 602 Sportsman were on the docket starting with practice on Tuesday, January 26 with racing starting the next day and continue through Saturday night final event.

The laps and money were to increase each night and there were also some great products sponsors adding to the pot. With a moniker of Sun, Fun and Speed it is a great way to come south for all three and get away from the snow and cold for so many.

We headed down on Sunday and drove straight through with the basic stops for gas, food and to use the facilities. We took the opportunity on Monday, a beautiful day I must say to go see the track and then made our way farther south to visit a Southern Tier icon Arthur Darling and his wonderful wife Betty in Dade City, Fla.  Art was a track official at many of the tracks in the Southern Tier and tracks up north back in the Glenn Donnelly days. It was a great trip and did a lot of reminiscing before heading back to Ocala.


Now on to the racing.  I will be writing about the drivers that went down from my area of the Southern Tier of New York which I will extend over to the Outlaw Speedway. Before doing that, I will tell you a few things about the car counts and a few interesting things, well I thought they were interesting at least. I will end with a couple upcoming events that I believe will be great and end with a little editorial.

Tuesday practice had a great turnout and fantastic weather with the STSS officials giving the drivers four solid rounds of practice to get time out on the racetrack. It is a 3/8-mile track with very mild backing but has a D-shape in turn 3 and 4 which makes for a very short backstretch. The wall also is very low back there and builds up a lot of clay causing track crews to clean periodically. Wednesday night racing unfortunately fell to the rain cancelling that night of racing. Weather looked good for the rest of the week and the shows went on without a hitch.

The first two nights of racing Thursday and Friday saw 46 of the STSS Modifieds and 37 of the STSS Crate 602 Sportsman competitors draw for heat racing action. The final night with a few mechanical failures or a couple headed home early to beat the impending weather up north, the car count was still strong at 40 Modifieds and 33 Crate Sportsman taking part in the racing activities.

Before I do this part of telling you how the folks in my area did, I want to apologize if I omitted anyone as it isn’t on purpose, but I think I did miss an Outlaw Sportsman competitor and again I am sorry if I did. Here we go.

There were five Modified drivers in attendance from Afton and here they are and how their week went. Rusty Smith (34) qualified all three nights and had finishes of 25th, 23rd and 23rd. Marshal Hurd (58m) had finishes of 22nd, a DNQ, and 21st. Andy Bachetti (4) first two nights were DNQ’s and final night after running strong dropped out and relegated to 29th at the finish. Jeremy Smith (46), also a regular at Thunder Mountain Speedway, had finishes of a DNQ, 22nd and 27th. JR Hurlburt (6H) failed to qualify any night as they were chasing some new issues on the car and one night being taken out in a qualified spot with one to go. One Afton Sportsman was on hand and had to strong finishes. Bobby ‘Flash’ Flood (91) had a 5th and 6th place finish and was one that headed home early as they do snow-plowing.

Competitors taking part from the Thunder Mountain Speedway besides the before mentioned Jeremy Smith was his hired gun and the 2020 Modified track champion Billy Decker (91). Decker garnered a 12th, 5th and a 3rd on the final night after leading many laps. Kenny Hammond (30) participated the first two nights without making the show and night three was watching from the stands. The team was enjoying the trip down as a family vacation. Thunder Mountain rookie competitor this past season Josh Allan (4a) finished 21st, 19th and 15th as he improved every night. The youngster is looking to run full time in the Crate division this season.

Penn Can Speedway was represented with Modified competitor Nick Petrilak (72) who ran the first two nights but failed to qualify. Two Sportsman were there and they were Michael Schane (M1) who got a 3rd, 7th and 8th place finishes. Jim O’Hara (44) the first two nights registered DNQ’s and came home 17th the final night.

Five Mile Point and Skyline Raceway both had a Sportsman competitor attempt making one or all the features and here are those two results. Matt Sobiech (66m) from Five Mile failed to qualify on night one and finished the week with a 24th and 23rd respectively. Dale Welty (123) made all three features and ended up in 15th, 19th and 28th.

Outlaw Speedway had seven representatives for sure, but like I mentioned above I might have missed a Sportsman competitor. One Sportsman competitor I got was Brian Fish (27) who did well the three nights with a 7th,11th and a 10th. The Modified drivers there were Tyler Siri (5*) who took home two 28th place finishes the first two nights then a fine 4th on night three. Jordan Siri (28) two DNQ’s and finished with a 17th place finish. Danny Johnson (27j) had a 19th, dnq and a 20th. Ron Cartwright (2B) finished 24th on night one then two dnq’s. Eric Williams (21) and Chris Ostrowsky (2j) both failed to qualify for any of the features.

Some of the interesting things that I thought about during the week was the many youngsters racing and how well they do give me hope the racing in the Northeast will be staying strong as some of the older racers start leaving the sport. One of the real strong youngsters’ in Tanner VanDoren (22) who won the Crate Sportsman feature on night two while celebrating his 13th birthday. The first and third night saw the (69K) of Stephen Kemery pick up those two features and being the only repeat feature winner out of the Three and three Modified features.

The Modifieds were taken by Eric Rudolph (25), Stewart Friesen (44) and Mike Gular (2a) and these guys got many years left in their own careers. On the final night of racing the Crate Sportsman division saw a big disparity in age on the track with VanDoren at 13 and Jim O’Hara at 71 a difference of 58 years.

Two big shows coming up for us fans of center steer Modified and or Sportsman in March. First is at Georgetown Speedway on Friday March 12th for small-block Modified and Rush Late Models along with the normal divisions run at the track. The next night Saturday March 13th will see the first event for the Bob Hilbert Sportswear Velosita Racewear STSS South Region event in the Melvin L. Joseph Memorial 49-lap feature paying a whopping $10,049.00 to win and Melvin Joseph Construction to pay $49.00 per lap with the money rotating through the top seven spots. It is also the series starter for the Crate 602 Sportsman.

The following weekend it will be the first time for the STSS to make a first ever visit to the Selinsgrove Speedway on Saturday the 20th for the race dubbed the Ice Breaker. Same name it was back when the Race of Champions use to make the March event a few years back. The next night it will be the Spring Showcase at the popular Port Royal Speedway. Hope to see you at one or all of the above as they will be good ones.

I will end here as I am starting to get long but I want to say let’s all hope for a great 2021-racing-season as the track promoters, racers, fans, builders and parts sellers could all use it. If you are not racing, tracks suffer and surrounding businesses suffer also. Please be safe but support your local race track and the small business’s around them as they are the ones that support this sport and local youth sports. For any news, notes or just something you want to pass along you can reach me at Leon84@aol.com