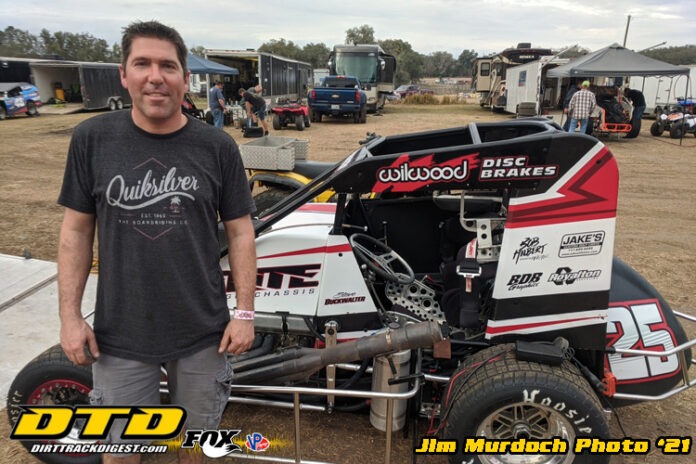 His distinctive Philadelphia accent stood out in the 33 car field of midget drivers on hand in the first of two nights of action at Ocala Florida’s Bubba Raceway Park, being the only driver from the Pennsylvania hotbed racing circuit signed in. 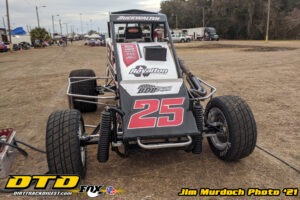 Buckwalter earned a 16th place starting position, moving up three spots before persistent rain on the already tricky clay surface postponed the remainder of the feature to Saturday.

But there is a distinct home field advantage for the Buckwalter racing team despite being 1,000 miles south of the Philly metro. Bubba Raceway Park’s layout, a short half mile tri-oval, is nearly identical to the New Egypt Speedway, a track he dominated during ARDC competition over the last 15 years, winning most of the races run at the Central New Jersey speedway.

“It helps. It definitely helps. We come down here and it reminds me of New Egypt. We run the same set up, same gear, different surface but it’s basically the same,” said Buckwalter, moments before the drivers’ meeting was set to begin, with racing stars such as Chase Elliot and USAC hot shoes like Kevin Thomas Jr, Buddy Kofoid, and Chris Windham, not to mention a fleet of immaculately prepared half dozen midgets out of the Keith Kunz stable.

The versatile driver once again plans on focusing his efforts in the 2021 racing season with his winged 410 Sprint Car at Williams Grove Friday nights and Port Royal on Saturdays, but will compete with the reformed ARDC midget club when his schedule allows.

Buckwalter sees potential in the renewed interest in northeastern midget racing but he says Pennsylvania is still 410 country.

“We will try to run as many ARDC as we can, if they stick on the cheaper engines it will succeed. If you have the money to run a national midget engine you go Sprint Car racing back home. The purses are simply too good in winged racing,” said Buckwalter.

Wingless racing in the northeast has jumped in popularity in recent years. Many micro sprint tracks now offer a 600 wingless division. The self-starting super sportsman have their own tour, and a home track at Path Valley. New Egypt and Accord offer wingless 602 crate Sprint Car racing, and the USAC East Coast 360 series has seen tremendous growth since its inception only a few years ago.

“It’s definitely better from the fans’ standpoint. I would not be shocked to see fields of 40 plus at the USAC East Coast series,” Buckwalter predicted.

“If it’s above 45 degrees we will be there. Anything less forget it. We left Volusia (Speedway Park) the other night and it was 34 degrees. That’s no fun no matter what state you are in.”