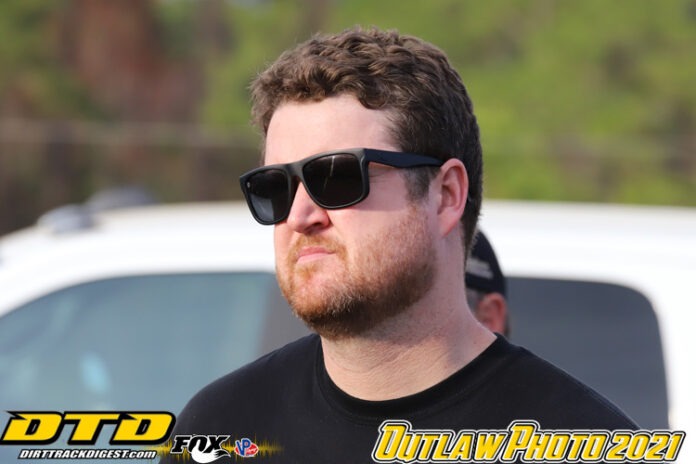 A few weeks has seemed like a full season for Peter Britten and his crew.

They finished a brand new Bicknell just hours before loading it for a trip to Bubba Raceway Park for the Short Track Super Series only to see it totally destroyed in an aerial adventure less than one lap into the feature.

After working all winter it was back to square one and standing in the Bubba pit less than two weeks ago he wasn’t certain that he would be able to regroup for Volusia.

However, on opening night of the DIRTcar Nationals at Volusia, Britten and his team weren’t only there, but they were a genuine contender.

Peter, in his first full feature behind the wheel of a Bicknell chassis chased eventual winner Stewart Friesen early on, closed up a huge deficit as they reached traffic, took the lead on a restart that was called back due to a massive pile-up and then had to settle for second place.

Standing alongside the 21a, Britten said, “Dylan (Zacharias) and I busted our balls on this to get it done and get here. I really have to thank the McLaughlin’s for letting us use their shop in Mooresville (NC) to get this back together.”

The second new car wasn’t something Britten had intended on doing so early in the season.

The frame and body got to North Carolina about five in the morning last Wednesday and was back together, other than the body, by 11 o’clock on Thursday.

Kimber Tyson, a crew member, went to Bicknell and grabbed a new frame as they didn’t have an extra in their Rochester, N.Y., shop.

Peter noted, “I really didn’t have any expectations coming in here. I just go out and race and try to do the best I can.”

Well, on opening night the Ryder Racing No. 21a came home second, but the foundation was set for what could be a good week at the ‘21 edition of the DIRTcar Nationals.