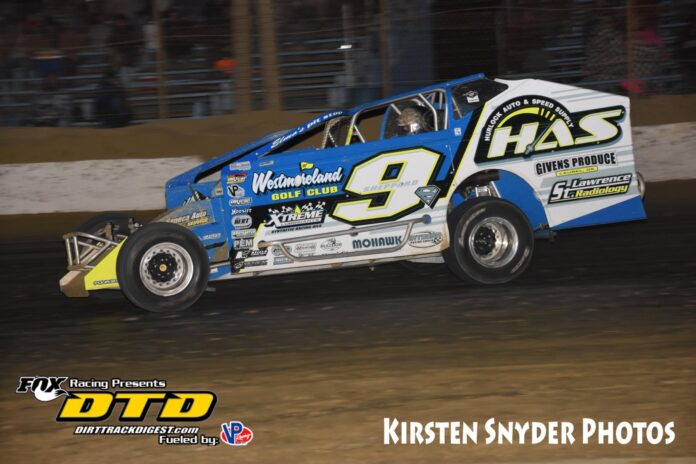 It should not come as a shock to anyone when Matt Sheppard wins a race. The driver from Waterloo, N.Y., has won more dirt modified races in the past five to ten years than any other driver in the Northeast. Sometimes a win is just win and there are other times when a win means so much more.

As I interviewed Sheppard Saturday night inside his hauler as he was enjoying a well-earned adult beverage, it was easy to tell how much winning the Melvin L. Joseph Memorial 49-lap feature race meant to the man they simply refer to as “Super Matt.”

“What a race, even I was impressed with that one,” said an elated Sheppard. “This car was so good after the restarts and it was good up in the middle to the top part of the track and it seemed like everybody was just married to the bottom.  I could just move up to the top of track. It was not like I was nailed to earth up there but there was just enough grip up there for me to keep my momentum going to either get by guys quick or just wear them down.”

Sheppard’s day started off with a bad pill draw after the drivers meeting forcing him to start deep in his heat race. Sheppard was able to get up into a qualifying spot but did not have enough time to get into top two which would have put him into the redraw for the feature event.

Starting 19th in the feature race, you just knew that Sheppard would be on the gas early trying to work his way towards the front, especially with the hottest driver in the Northeast and winner of last nights small-block race Stewart Friesen starting on the pole. Sheppard quickly worked his way through the field and on lap 10 was already just outside of the top five in sixth place. Sheppard continued to run sixth having trouble getting by a strong running Erick Rudolph. A lap 17 yellow would the be the break Sheppard needed.

The ensuing restart saw Sheppard make the move of the race as he vaulted his way up to the third spot getting by Rudolph, Tyler Dippel and Matt Stangle in one fell swoop.

“Yes, that restart was definitely the key,” explained Sheppard. “But I think it was the guys in front of me fighting so bad trying to get back down the bottom that it just left a clear path for me to roll around the outside of them.

“I got a good start, and I went down into turn one and I think it was Dippel who was in front of me, and he was trying to get back to the bottom like he thought he needed to be.  It kind of stacked the guys up there and I turned right and just went to the top and drove around them.  That was key.”

Sheppard’s next move was to get past second place running Mike Mahaney and he was able to accomplish that two laps later on a lap 22 restart. Once past Mahaney, it was the red-hot Friesen who remained between Sheppard and victory lane for the first time in 2021.

It was Friesen down low and Sheppard up high as the two titans of Northeast Modified racing went at it with Sheppard running the high-side and Friesen down low. Sheppard was able to get up alongside of the Friesen on two occasions to take the top spot only for the passes to be wiped out due to yellow flags. However, that just made Sheppard more determined as the laps wound down. Finally, on a lap 30 restart Sheppard was able to work his way past Friesen to take the lead away.

“I thought I had Stewie there a couple of time only to have the caution come and I was like oh wow,” said Sheppard as he talked about the pass for the lead and win. “I don’t know how long I was riding there on Stewie’s right rear quarter panel, I am not sure if knew I was there, but man I knew I was there for a long time and I finally felt like I wore him down.  I was able to drive by him and then the caution comes out, then I do it again and this time I was all way by him and into the lead and bam, the caution comes out again and I’m back to second again. Then on the next restart I was able to get a good bite coming off four and drive by him.”

Once in front, Sheppard started to pull away from Friesen and was able to open over a two second lead only to see the lead dissipate when Sheppard started to come upon lapped traffic. It did get close on one occasion as Sheppard was stuck behind the car of Jordan Watson, but once Sheppard maneuvered by Watson, he was able to keep a safe distance between himself and Friesen to take his first win of 2021.

“It was nice to get a win up here on the first weekend of the season,” mentioned Sheppard. “You know, we didn’t have a terrible to Florida, we didn’t tear anything up, we finished every night and had some decent finishes, but it still sucks to go down there for as long as we did and not get a win.  To get a win this early in the season is great confidence for team and for me as well.”

Sheppard went on to talk about how satisfying it was to be able to pass and take the win away from Friesen who has already registered four wins in 2021 and is currently the dominant dirt Modified driver in the Northeast.

“Stewie has been on fire and him and his guys are on top of their game right now,” explained Sheppard. “There is no doubt that he is always good here and when he rolls in here and draws the pole tonight you know you are in for a fight if you want to beat him. So, starting 19th tonight and being able to drive up and by him, you know you had a good night. You know, maybe that is my good luck charm because I almost think that he started on the pole last October when I was able to drive up and get by him to win.  Maybe that’s what I need to happen every time we come here.

“It was a good night for our team and to get a win, especially the way we did it tonight is very satisfying. You know there are wins and then there are wins like tonight and tonight was an impressive win. We don’t get too many of them anymore, so we are going to savor this one tonight.”