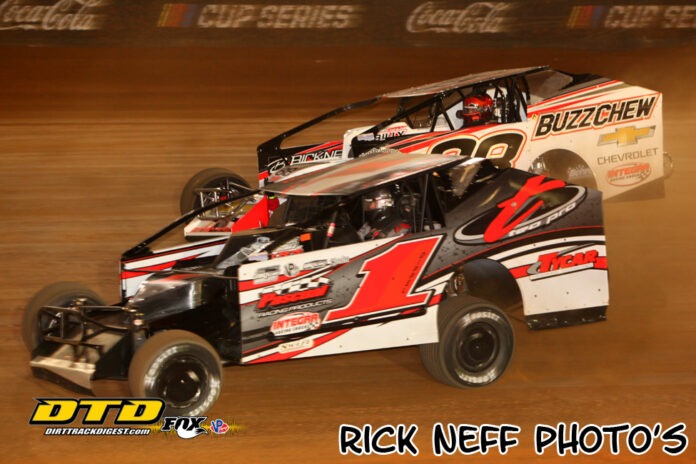 Tyler Dippel was in the mix early in Friday night’s opening round of the Super DIRTcar Series Bristol Throwdown at the Bristol Motor Speedway. He eventually ended up coming home in the second position between Stewart Friesen.

Dippel is one of the few drivers in attendance that does have laps at ‘The Last Great Colosseum,’ albeit those laps came on the concrete.

When asked about his prior laps at Bristol, Dippel said, “I felt like it did. Actually, believe it or not they drove pretty similar. You get a little more sideways in these things, but you drove it with the right front (like you do in the NASCAR Camping World Truck) instead of the right rear.”

Dippel knew he had to take advantage of any opportunities to advance his position, that’s exactly what he did when second place runner Mike Mahaney got bottled up in traffic.

“You have to be really aggressive here,” stated Dippel. “If there is a little bit of a hole, like when I got past Mahaney, I was kind of able to use the lapped car as a pick. You’ve got to take every little hole here because you might not get another one.”

Mat Williamson felt comfortable in Friday night’s feature. He went off from the outside of the front row. He was rolling well, but not good enough to compete with Friesen. As a result, changes are expected for the Super DIRTcar Series finale.

“Honestly, I think we’re going to go make big changes,” commented Williamson. “We don’t have a very good race car. I think starting position was what got us in the top three and we’re going to work hard to make sure that’s not the case tomorrow. “

Williamson struggled out of the box in the season opener for the series at Can-Am Speedway. Friday’s podium finish was what the doctor prescribed for the Buzz Chew team.

“We struggled in the opener at Can-Am, but we rebuilt a frame and put a new car together to come down here with,” cited Williamson. “It just goes to show you the effort the guys in the shop put in to rebound from a 15th place run to get ourselves back in the point hunt. We won our heat and set fast time in our heat so we got a couple of extra bonus points.”

Williamson thinks that the some of the testing they did on Thursday night may have hurt them on Friday.

Stewart Friesen was fastest in time trials at 16.574 setting the track record…

Justin Haers blew a left rear tire during the first Modified qualifying event. He was running fourth in a transfer position…

Billy Decker got high at the opening of the first lap of the final qualifying heat causing him to spin collecting Chad Phelps. Decker was done for the race but secured a provisional for the feature. Phelps did not return to the speedway…

Brett Hearn returned to the car for the Bristol event only suffer a flat left rear tire early in the feature.