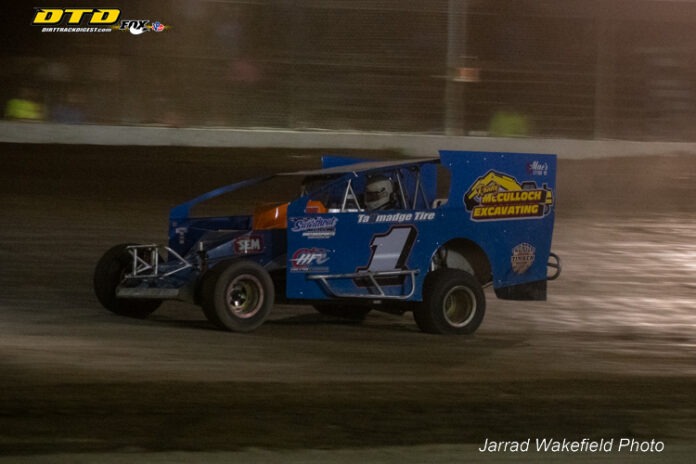 What is racing without family? Visit any track of any size or shape in any part of the country, and you are sure to find at least a few families that live and die by the racetrack. Some are families that have been racing themselves for generations, others have been diehard fans for just as long. However, the Paine family is one that has had a serious effect on the Modified scene in the Northeast. While Don Paine didn’t race, two of his sons, Steve, and Bobby, became quite prolific racers. While Steve became a Modified standout, winning the championship for the Super DIRT Series in 2000 and becoming enshrined in the DIRT Hall Of Fame, brother Bobby also had his own stout career in the then new Sportsman class at the Paradise Speedway, being one of the first drivers to find consistent success in the fledgling class.

However, in 2021, the Paine family continues to race to this day. A three-car fleet is fielded out of their shop in Waterloo, N.Y., to race at one of Steve’s most successful tracks in the Outlaw Speedway in Dundee, N.Y. While Tommy, the middle child of three, continues to race in the Sportsman class at Outlaw, the oldest son, Billy, has recently made the permanent move to the Modified class, looking to forge his own path in Modified racing.

While watching his father Steve have success on what became the Super DIRTcar Series tour, Billy’s interest in racing also came natural to him outside of the racing his father did.

“I saw my Dad [Steve] racing growing up, which was a big influence,” said Billy. “But I also just like racing in general. I raced bikes and other things against my brothers and family, and around middle school I really started to take interest in racing. We started with a microd when I was 16, and we quickly moved into a Sportsman from there, which got us started.”

It only took Billy a few weeks in a microd to decide that this was something he wanted to be a part of. So, the Paine’s got another HigFab Chassis and prepared it for Billy to run in the crate class. His first year was successful, as Billy practically dominated the novice Sportsman classes at Outlaw and Land of Legends Raceway. This quickly moved Billy into the regular Sportsman class, which is where he would race until some new developments created opportunities for Billy.

“Towards the end of the first year in the Sportsman, we picked up a new sponsor in Randy McCulloch Excavating that got us a big-small block that allowed my dad to compete at Outlaw with the fairly open rules package,” said Paine. “So, that left our big-block open in another car. I asked my dad if I could run that car in a dash at the Dutch Hoag Memorial event at the end of 2018, and he let me.”

It did not take long for Steve to notice that Billy was comfortable in a Modified, but the move would only last a year due to a variety of factors.

“He liked how I looked, so I raced that car and my Sportsman at Dundee, and my dad ran my Modified at Land of Legends,” said Paine. “We stopped running two Modifieds for a few reasons. We decided it would be best for me to focus on one class, in addition to my brother Tommy starting racing, which meant we needed to have a car and trailer for him.”

With Tommy joining the Paine Motorsports fold, Billy refocused on the Sportsman class for the Covid-shortened season in 2020, but the thought of going back to the Modified class still weighed on the family’s minds. One year later, in the 2021 season, it would take one night gone bad to make that decision final.

“We ran Sportsman all year in 2020, and we thought about moving up,” reflected Billy. “But we wanted a small-block for our program specifically. We decided to stay with the Sportsman class for 2021, but we got in an accident at the Short Track Super Series event this year and decided that was enough for us. We had been caught up in a few situations like that earlier in the year and it was honestly getting expensive.”

The accident capped a string of many wrong-place, wrong-time incidents for Billy and Tommy. Billy had nowhere to go but into the pileup as heavy contact with a mid-air Stacy Jackson did severe damage to Billy’s blue No.1 Sportsman. The wreck happened right after the green flag; adding another level of frustration for all drivers involved, as they really didn’t get to race before they went home with wrecked race cars.

“After that, we decided that when we put my car back together, it was going to be a full Modified program,” said Billy. “I feel like you can develop bad habits in the Sportsman class with how little power a crate has compared to a Modified engine. If you want to move up, it’s better to do it sooner rather than later.”

The Modified move has been an enjoyable for Paine, as he continues to get comfortable and works on improving his pace on track week by week. Paine looks to pave his own way in the Modified world under the guidance of his hall-of-fame father.

“At least for now, we’re going to race as long as I keep improving and keep having fun,” said Billy when considering the future. “We get more experience every week and keep running well. I don’t know what the long-term future holds, hopefully we can get some wins over time. There’s not much pressure from my dad really; people make comparisons and so on, but I do my own thing. We might travel more in the future, for now I’m focused on getting good at Dundee and getting comfortable in the Modified.”

“Dad’s going to have a big-block together hopefully by the end of August, so we hope to run Land of Legends a few times,” added Billy. “Maybe in the future we can have another big-block program and do that. If we’re going to travel, especially soon, it will be with dad. We might hit some Short Track Super Series shows in the future after the good run he had with the win at Outlaw. It’s not certain, but we’ve thought about it.”

It is difficult to compete in a Modified world today. There aren’t really any tracks in our Modified world that do not have at least four or five drivers that can compete with the best at tour races or at their home track. The Outlaw Speedway field has been tough in the past few years.  Hall of Famers and Future Hall of Famers such as Steve Paine, Alan Johnson, Danny Johnson, Bobby Varin, and Matt Sheppard have all called Outlaw Speedway home at various points over the past few years. Combined with the legacy his father continues to leave, Billy Paine faces a difficult task in paving his own path in an ever-competitive Modified world. While the future may be unclear, Paine seems rather unfazed by it. As the seat time continues to grow, it will be interesting for fans of ‘The Hurricane’ to see what Billy and Tommy do in the future with their racing careers.