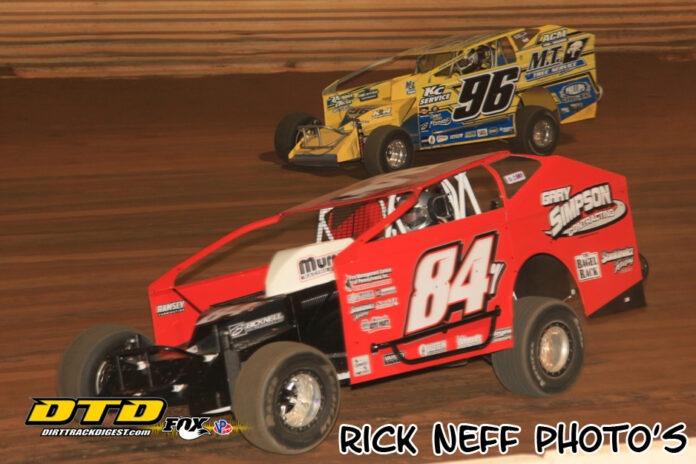 Mike Mahaney started in the fourth position for the Speed Showcase 40. Godown took the lead early in the race by half a straightaway over the rest of the field. Mahaney ran the top and went around Godown on the high side to lead lap 12. There was a caution on lap 13 where Mahaney, Godown, and Williamson went three-wide for the restart, with Mahaney maintaining his lead.

Further back in the pack, Stewart Friesen and Alex Yankowski fought for the sixth position, throwing slide jobs at each other until lap 28 when Friesen brought out the caution and took it pit-side. On the lap 28 restart, Williamson and Godown made contact coming off turn four for the green, which led to some intense racing as the laps counted down. Mahaney went on to lead the remaining laps of the race to come out victorious in the Hutting Racing No. 35. Williamson and Godown finished out the podium.

Starting in position 24, Anthony Perrego hard charged his way to the seventh position.

Ryan Godown finished third and put it on the podium for night one of the Speed Showcase Weekend. Godown stated how track placement was key for doing well in the feature. There is some work that he will need to do to prep for the qualifiers and the 200 lap feature on Saturday.

“I am a little on the snug side on my entry, but it is just minor adjustments from here,” said Godown.

After redrawing first for the Speed Showcase 40, Godown was a dominate force within the feature and made his car work to earn that podium finish. As he looks into Saturday’s 200 lap race, he reflected on last year’s Speed Showcase 200, “I think Saturday will be like last year – track slick from bottom to top. It will be good. The track is always phenomenal here.”

With some adjustments, the R & M Motorsports No. 26 Modified will be forced to contend with as we move into the qualifiers and feature event.

The fourth place finisher, Alex Yankowski in the Gary Simpson sponsored No. 84y, drove with a heavy heart after the passing of long time racing supporter and car owner Gary Simpson.

“We are all saddened to hear what happened to Gary this morning. It was really unfortunate, but he had a lot of faith in me this little bit that we were paired together,” said Yankowski.

Simpson had recently became a sponsor on the 84y, so it was an increasingly difficult day for the Simpson family and the 84y team. Yankowski and the team will be bringing out a new car for the qualifiers tomorrow and the Speed Showcase 200 on Saturday.

Ryan Watt started in the seventh position in his heat race and rocketed to the front to win to qualify for the Speed Showcase 40.

“Things just kind of went our way. They left me the outside lane and I was just ripping around the top,” said Watt.

He stated that he watched the other heats and was worried about being able to pass cars to make it into the show, but once he found his groove on the top-side, he’d go on to dominate. Watt redrew the third position for the start of the feature and brought the Ronnie Roberts owned No. 14w home round out the top five. Watt and the team are confident that they have a good working car for the qualifiers on Friday and the Speed Showcase 200 on Saturday.

The Belmont’s Garage 602 Crate Sportsman also had two sessions of timed hot laps to obtain a locked in position into the redraw from each session. Brian Krummel was quickest at a 20.896 in the first session. Krummel was also the quickest time in session two at a 21.395, but the second redraw position was awarded to Dakota Kohler as second quickest with a 21.408.

Next up is Day 2 of the Short Track Super Series Speed Showcase at Port Royal Speedway on Friday, October 15th. Modifieds are set to run their 20-lap qualifiers to attempt to make it into the Saturday portion of the event. The 602 Crate Sportsman also have 15-lap qualifiers, in addition to the Pro Stock 30 lap race.

Saturday is the final night of the Speed Showcase Weekend where the Modifieds are slated to battle it out for 200 laps and $50,000. In addition will be the 50-lap 602 Crate Sportsman feature coming in at $4,000 to win.