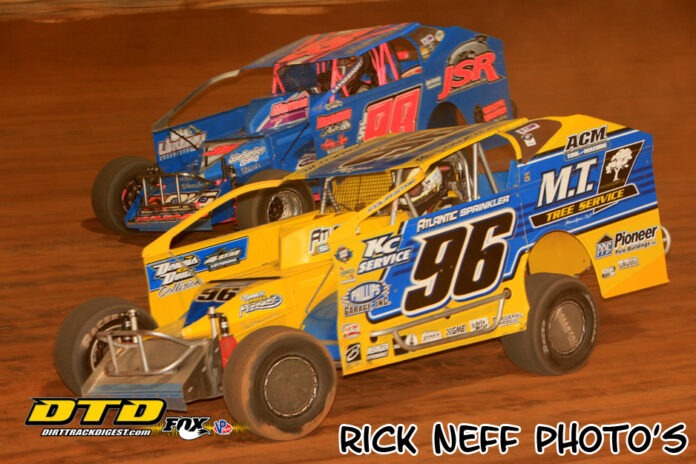 Qualifying took place last night to set the field for today’s Short Track Super Series Speed Showcase 200 at the Port Royal Speedway. With weather in the area, the night’s racing was run quick and efficient and when all was said and done, all the nights events were completed in a timely fashion.

Headlining the night were the mighty Short Track Super Series Modifieds competing in a series of four 20-lap qualifying races with the top six from each race locking themselves into the big 200 lap finale. The racing surface at Port Royal was spectacular as drivers were able to run multiple grooves with plenty of passing taking place during the night. At the end of the four races, it was Andy Bachetti, Matt Sheppard, Ryan Godown and Billy Pauch Jr., standing in victory lane and collecting the $750 heat race bonus courtesy of DirtTrackDidgest.com.

Qualifier #1 – Kyle Coffey took the lead early in this qualifier from his pole starting spot only to have outside front row starter Andy Bachetti take the lead away.  Bachetti proceeded to dominate the race. Matt Stangle was the big mover of the race coming from the 10th starting spot to finish second.

“The Garrity Asphalt car was really good tonight,” said qualifier race one winner Andy Bachetti. “We made the right calls and obviously drew a good number tonight. The car is very good right now and we just have to tweak on it for tomorrow night. It started to run a little hot tonight so we have to work on it to make it run a little cooler, but other than that, it is a long race and we will see what happens. With the rain coming, the track will change a little for tomorrow and tire wear shouldn’t be an issue.”

Qualifier #2 – After a rough start last night in the Speed Showcase 40, Matt Sheppard showed he is back by winning the second qualifier after starting back in the ninth position. Sheppard methodically worked is way up to the front to take the lead away from Peter Britten late in the race.  He checked from there.

“Obviously our car was better tonight than last night,” said qualifying race two winner Matt Sheppard. “Tonight was still a product of last night, we had fuel regulator issues crop up on us last night. We brought our big-block and our 360 with us this weekend and we thought last night would be a good opportunity for us to try the 360.  Honestly, the motor last night wasn’t as bad as the race car was. The motor definitely hurt me a little, but we just didn’t have the car where it needed to be and that contributed a lot to today.

We did switch back to the big-block for tonight, but we also switched a lot of things on the car and sort of took a whole new approach.  I am sure I wouldn’t be standing here talking to you if we would’ve just left car alone. There is still a lot or racing to do this weekend, but we had a pretty darn good car tonight and hopefully that translate into a good 200 race tomorrow.”

Qualifier #3 – Putting the disappointment of the night before behind him, Ryan Godown was on a mission to prove that he will indeed be a force to be reckoned when it comes to tonight’s Speed Showcase 200. Godown started in the fourth spot and worked his way to second right away, from there Godown continued to track down leader Ronnie Johnson and powered by on the inside to take command of the race. Once in front, Godown was gone, and he set a torrid pace to win by a straightaway.

“We made a couple of adjustments from last night,” said a happy qualifying race number three winner Ryan Godown. “The car was still a tick tight, but I like that tight feeling here. Obviously, we all want the pace to slow up for tomorrow.  We’ll just keep working at it. I probably set too hard of a pace in my heat race tonight being the heats were only 20 laps, but I saw the photographer’s flashes going off.  I didn’t know if someone was on my bumper or not, so we just kept it rolling. I did try and slow my pace the last few laps and started slowing my entry into turns three and four and by doing that I was even faster. I think we will be okay with what we have for tomorrow and it’s just a matter of being there at the end.”

Qualifier #4 – Billy Pauch Jr., was the show in this qualifier as he found the inside groove to his liking after a few laps and then he marched to the front to take the lead away from Erick Rudolph who had led from the start of the race. Pauch put everyone on notice that he will be a contender in the big 200 lap feature race.

“We were able to roll the middle here tonight and if you know me, every time I come here, I am usually ripping the top,” cited qualifying race number four winner Billy Pauch Jr. “We switched our whole program around today to something we really don’t do much of. Randy (Williamson) at Bicknell gave us a pretty close deal and Bilstein helped us with the shocks. I felt we were good in warmups which surprised me being so good early on.

“We have to fine tune it a little, I feel I have a good car for tomorrow, but we still need to be a little better. You look around here and we have a great group of guys here who work their asses off and I have no doubt we can make it a little better. You can run for millionaires, but you can’t put a team together that has heart and heart will win you races, and anybody will tell you that. If you have the right people around you, it makes the driver look that much better and the car is easier to drive. We switched up after last night and went to the coil car instead of the bar car because we wanted to get better. I figured I had a provisional spot to fall back on if we sucked but this car rolled off pretty darn good and it was on rails in the heat race. Now I will take the DTD money we won tonight and buy a couple of beers.”

Not quite as prevalent as on Thursday night, but there were still some big names that failed to qualify and will have to run one of the two last chance races tonight. Jack Lehner, Billy Decker, Anthony Perrego, Dillon Steuer, Brandon Grosso, Jimmy Horton, Rick Laubach and Frank Cozze are the most notable drivers that come to mind…

Anthony Perrego never got to see what his No. 44 was capable of Friday night when the rear end broke only one lap into his qualifying race…

Once Mat Williamson fell out of a redraw spot in his qualifying heat, the driver of the Behrent’s No. 3, decided to park the car for the night and fall back on his locked in spot for the 200 by finishing second in the Speed Showcase 40…

Mike Mahaney, Ryan Godown and Alex Yankowski were also locked in by virtue of their finishes in the Speed Showcase 40 but elected to try and improve their starting position by getting redraw spots for the 200. All three drivers accomplished that mission on Friday night…