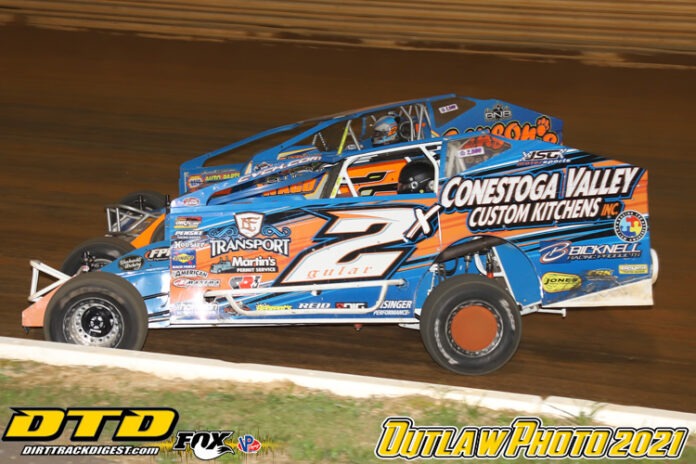 As of a a week ago, Jeff Strunk didn’t have anything solidified to compete at the Port Royal Speedway for the 2021 edition of the Speed Showcase 200.  His Dave Zubikowski owned team’s big-block is out of commission.  Enter car owner Terry Fasnacht.

Fasnacht made a phone call Monday, and in within minutes, a deal with struck for Strunk to join regular team driver Mike Gular in competing at the Speed Palace for the $50,000 to win event.  It’s not the first time they’ve worked together, Strunk drove a second car last season during the Cajun Swing in Louisiana.

“After Oswego, I went up there and helped them out, Terry called me Monday and asked me if I wanted to run Port Royal,” stated Strunk.  “I told him ‘Heck yeah!’  It took a lot of work to get here.  I’m very thankful for Terry, Mike and Jeremy to give me a shot here and Zubi (Dave Zubikowski).  He let me use the trailer and whatnot.  I wouldn’t be here without them guys.  They all had a hand in pitching in so I could get here.  I’m glad I’m here.  I’m looking forward to tomorrow.”

Friday night Strunk snuck his way into the main-event by finishing sixth in his Dirt Track Digest qualifier, the final transfer spot.  He benefitted when Mat Williamson elected to pull off after falling out of a redraw spot.  The defending winner already has a guaranteed starting position after his top two finish on Thursday.  That moved Strunk into the show.

Strunk’s heat was loaded with talent as joining Strunk were Larry Wight, Tim Fuller, Billy Pauch Jr. and Rocky Warner among others.  It wasn’t the way he wanted to get in, but he’s in.

“That’s the key,” commented Strunk.  “We knew what we had to do.  We were in a tough heat, toughest of the four.  We got a little break there at the end.  We’ll take it however we can get it.”

One issue Strunk is fighting so far is getting comfortable in the car.  He’s found that feeling in his regular ride with Zubi’s Racing, but he’s still trying to find the right feel at Port Royal.  He’s searching and getting better each time out on the track.

“I’m really happy with our improvements since we got here.  It’s only up from here.  We’ve been getting better every time we go out on the track and that is a big key to running good tomorrow.”

In speaking with Strunk’s teammate for the weekend, Mike Gular, he was happy to have Strunk as a partner after working with him last weekend on the Oswego Speedway where Strunk spotted for Gular all weekend long.

“In the 200-lapper at Oswego, he was great,” Gular stated of Strunk.  “He spotted for me up there.  It was great to have another driver spotting for me. I think that really helped us.  He knew what to do.  That experience was huge.  He definitely cheered me on when I was not doing good.  He helped me confirm when I moved around what was good, what was better and what not to do.  It was a big advantage to have him along with us and this is kind of a thank you for that.”

It’s been a tough week for Gular as once the decision was made to offer Strunk the ride, they needed to put the car together.  It was a quick turnaround after racing at Super DIRT Week.

“It’s been grueling,” said Gular.  “Jeff didn’t have anything for here, and he deserves to be here.  We had a motor sitting on the floor and a car that didn’t have a motor in it, so we decided to put that all together.   It’s been a long week.  I got more sleep this week once we got here than I got in the last three days combined.”

Gular has a similar feeling to Strunk as he’s just not comfortable with where the car is to this point.  He finished fourth in the opening qualifying event with Andy Bachetti taking the checkers.  He’s good when the track has bite, but once it begins to slick off, he just doesn’t feel as competitive.

“We are in the show, that is a big part of it,” commented Gular.  “We got to figure something out.  Some of the issues we were plagued with up there we are plagued with down here.  We cut this whole car apart and rewelded it back together and it’s still doing the same shit.

“We are good when there is brown in the track, but we are struggling when that goes away.  We got some work to do.”

The pair have exchanged ideas in an effort to find what they are both looking for.  It’s definitely a help as they can attempt to figure out what is causing some of their struggles.

“It takes a lot of the guessing out of it,” said Gular of working with Strunk.  “Our cars are doing the same thing.  He set his up and we set mine up.  They have a little bit of different packages on theirs.  It’s kind of narrowing down some of the things as to what it could be.”

Strunk and Gular will go to work looking to improve their efforts in Saturday’s 200.  The good thing is, they are both in the show.  Neither one of them has to worry about chasing a spot in the one of the consolation events.