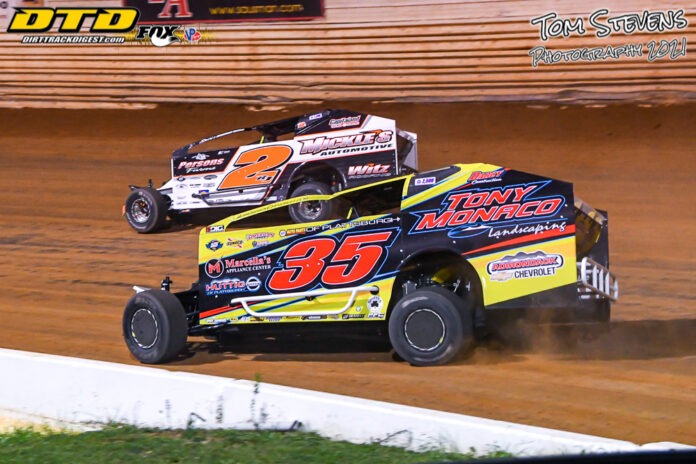 Night Two of the Short Track Super Series Speed Showcase 200 Weekend kicked off with qualifiers for the Modifieds and 602 Crate Sportsman.

Mike Mahaney made an impressive run in his Friday night qualifier to get into the Speed Showcase 200 on Saturday. The No. 35 team has been subject to issues with overheating over the course of this weekend. Mahaney had some reservations as they prepped for the qualifier as they still have to diagnose the issue that is causing the motor temperature to climb. During his qualifier, he said that he was watching the temperature constantly every lap to see if it would cool off.

The team has been working tirelessly to diagnose the issue but have exhausted multiple options. He said that they are fortunate to have a good car and to have made the redraw, so the only worry is to be on the watch for rising temps. The Hutting/Mahaney team does have a back up car on reserve, so it is going to be a tough decision to make as they move into the 200-lap feature.

“It is a tough decision because I know this car handles good and is faster than our back up car.  I am just concerned about having a car that we can win with, but to win you have to finish, so we have to make a really tough decision there,” said Mahaney.

If the team needs to resort to the back-up car, they will keep their redraw spot, so that is not of concern to them. They will spend time regrouping and diagnosing the issue to make it through the Speed Showcase 200 feature event.

Joseph Watson made it into the Speed Showcase 200 through his qualifying event. Starting in the fifth position, Watson made a run for the front and lead a good bit of qualifier two until Matt Sheppard took over the lead.

After the qualifier when we were able to get a minute with him, Watson said jokingly, “the game plan tomorrow is to pass Matt Sheppard on lap 199,” in which Matt rebutted that he would make sure to pass him back on the bottom.

This will be the first 200 lap race for Watson so their goal as a team is to finish the race. With a starting position in the middle of the pack, they will have the ability to spend the 200 laps working his way to the front. Watson was actually out for a while in quarantine, so he is very thankful to be back in the car and working towards the Speed Showcase 200 win.

Rocky Warner has had a very interesting Speed Showcase Weekend so far. In the Thursday night portion of the event the team struggled and did not qualify for the Speed Showcase 40.

In Friday’s portion of the event, he made the redraw for the 200-lap feature event. When asked about the difference, Rocky said, “The difference is Mike Walton and Brandon Plank, honestly.  They came over and took the time to talk about things.”

Warner was very thankful for the help from his team. Thursday night for Warner was not that easy he said, “the car was just undriveable.”

As a team, Warner, Plank, and Walton made adjustments from night one to night two of the weekend and are confident that they have a car that will be in contention to win the 200-lap feature.