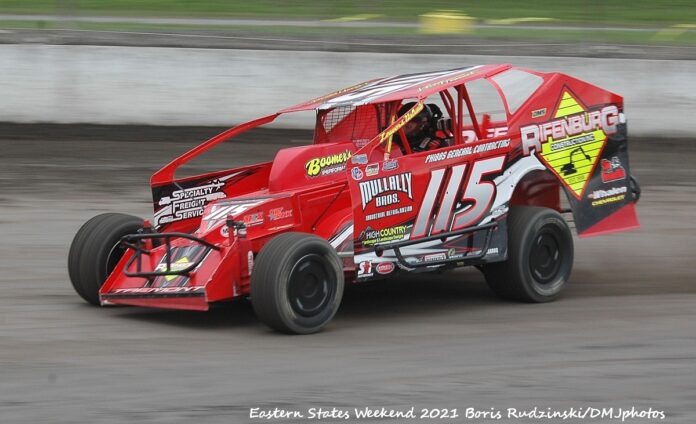 Fan favorite and one of the nicest guys in racing was one of the early cars to take time in the T-Mobile 200 time trials on Friday afternoon. Tremont, 59, from West Sand Lake, NY put his famous #115 Bicknell into the top 6 on Friday afternoon. A difficult year has plagued Tremont since the late off season of 2020-21 however a top six starting spot will help shine a little sunlight into a rather dreary season.

“I’m not entirely comfortable with the car. I don’t have the confidence that you normally can get. A point where you can settle in and drive a bit. I feel that with the coils and the long rods that the car is all over the place. You’re not sure if the car is going to go left, right or spin out. It’s a really difficult thing to deal with. Physically and psychologically,” said Tremont.

Tremont did add “it’s a huge relief to be in the show for the 200. It allows us to focus on race prep and strategy with the new pit stop rules. You don’t want to be in the consi on Sunday and hoping you make it in.”

Tremont is coming off a top 20 finish at the recently held Oswego 200.

“I was trying to race out there. I could get through three and four but the holes in one and two I just couldn’t get the car to handle to avoid those. We made the show out there and we just decided that since we were there, we were going to race. I am really thankful that George (Rifenburgh) is helping with the sponsorship. We were in a little bit of a hole in the late off season getting our cars together when the S&S sponsorship left, but we hope to go out with a bang to end the year,” said Tremont.