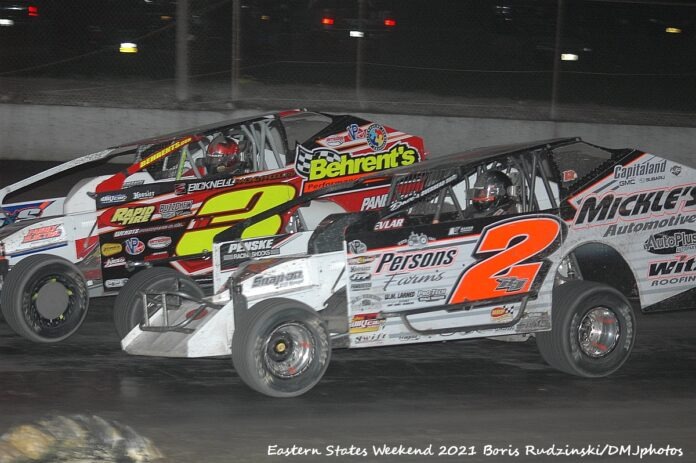 Mat Williamson did not know what to expect when he strapped himself into the No. 3 Modified for Sunday’s Eastern States 200. Less than 48 hours earlier, Williamson had totaled the Behrent’s No. 3 big-block Modified when the brakes failed as he sped into turn three during the Will Cagle Race of Champions race on Friday night.

Williamson ran straight into the outside wall and ended up getting upside down for the first time in his career. The car was a total write-off, leaving the team the question of what they would do for Sunday’s Eastern States 200 in which Williamson had already qualified the car for.

One option was taking the big block motor out of the wrecked car and put in into their STSS car. Unfortunately, with a hit that hard the team didn’t want to take a chance on the motor not being damaged as well. The other option for the team was to drive up the to the Buzz Chew Shop and bring down one of the No. 88 Buzz Chew Racing cars for Williamson to race.

Starchak, owner of S&S Paving, was at Orange County Fair Speedway fielding a car for Marc Johnson to run in the 200. Williamson had run one of the S&S Paving cars a couple of times earlier this season at Lebanon Valley Speedway to help get a handle on it for Starchak’s young driver Chase Dowling. The cars are like the No. 88 Buzz Chew Modifieds with them being Bicknells with Billy the Kid motors. Starchak then offered their backup car for Williamson and the Behrent crew to use for the race.

“I just have to thank everybody involved for making this week happen,” explained Williamson after his third-place finish. “S&S Asphalt Paving, Kevin Starchak, Farmer Bob and everyone else who helped put this deal together. Everyone at the shop worked hard to get this car turned around to race here today. Guys from their team, my team, the super team worked their asses off to make this happen. Yesterday when I was here racing the small-block car, they were all back at the Behrent’s shop getting this car ready for me to race today and I cannot thank them enough. Obviously, getting a podium finish to these two guys who are the best in the business right now is quite an accomplishment.

“The car was pretty much ready to go, we just had to put a dry brake system in it. The guys got it ready for a long-distance race and put my seat in it so I would be comfortable for 200 laps. Once that was all done, it was scaled and then it was ready to go.”

Williamson started the 200-lap race in the 27th spot, and although progress was slow in the beginning, he was able to work his way forward enough so he could keep from getting lapped by the two leaders Stewart Friesen and Matt Sheppard as they were setting a torrid pace out front.

“I was worried about getting lapped early on in the race,” said Williamson. “I kept looking up at the flagger as he was getting ready to put out the move over flag to the guys behind me. I could see he was starting to get the flag ready as I went by, so I knew the leaders were getting close. Obviously, at that point you are hoping for a caution, and we got the one we needed. I don’t think we were probably the third best car here tonight, but we got some lucky breaks and some perseverance, and we were able to get it rolling.

As in most races, restarts were the key and Williamson was able to take full advantage of them tonight to help himself as he worked his way to the front.

“It was weird how it worked out tonight,” mentioned Williamson as he talked about the restarts. “The outside really fired off but then you had to be at the bottom going through one and two or you would be hung out there. This race was kind of crazy and it was fun to just be out there playing around.”

After what happened to Williamson and the Behrent’s team on Friday, it was very satisfying to bounce back and get a podium finish in the Eastern States 200.

“Unfortunately, we have been beating Jeff’s (owner of the No. 3 Jeff Behrent) equipment up the last couple of races,” cited Williamson. “So, it’s good for him and us to rebound off of that and have a good clean run tonight.”