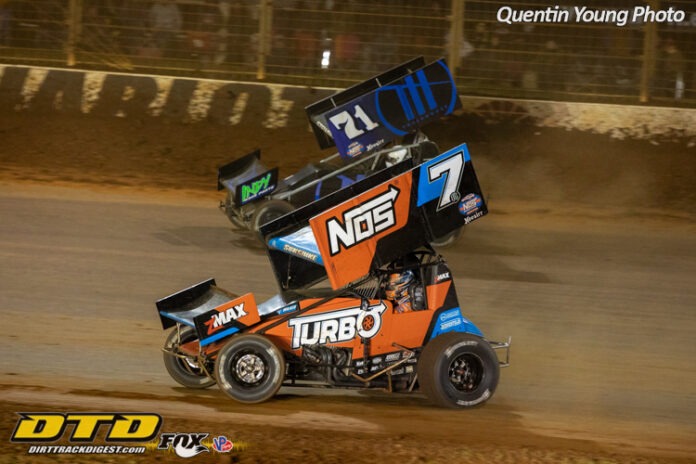 Tyler Courtney’s name has been synonymous with USAC open wheel racing, but this year he has found a new home and in doing so captured the third major championship of his career.

Driving for the Marshall-Clauson No. 7 team, Tyler saw a wing placed atop the car for the first time and off they went in pursuit of some All Star Circuit of Champions hardware and cash.

Little did anyone realize that when the team debuted in Florida that eight months later Tyler Courtney would be the ASCoC Champion.

Tyler said, “It was awesome. We had a good experience and exceeded all of our expectations. We were able to win the Kings Royal at Eldora, win the All Star championship, and get eight wins while having a lot of fun learning.”


Continuing he said, “I still don’t know if I have the handle on winged car. Some nights you can have fun while the next you can get your ass kicked. What you want to do it make yourself and the team better.”

Shifting from non-wing USAC to putting the top on he said, “I kind of have done everything I wanted to do at that level and I just wanted to take the next step. With the help of the great partners I have I was able to keep doing it.”

Currently, Courtney is in a situation that is very “meaningful” to him as he said, “Bryan Clauson and I were very close and it is awesome to be in this ride. When I was 15 and 16-years-old I was working in their shop. It is an honor to race with this team.”

Courtney talked about his career and explained, “I started when I was seven-years-old and have run Sprints for the past eight years. I started out in quarter midgets and then micros.  I started running Sprints at 19. My grandparents had owned a race track so I have always been at a race track. It has been my life.”

Asked when he thought his career turned the corner, he said, “I think it was when I won my first USAC race. I gained confidence and winning the championship I proved to myself that I could do it. I’ve won a USAC Midget and Sprint title.”

Courtney’s name is becoming nationally known as regularly he appears at high speed on Flo Racing.

He noted, “Flo helps us to be able to approach sponsors and that way we are able to grow our brand and name. I really think streaming helps our sport. People see tracks that they have never seen before and find themselves wanting to go to them.”

This past season, Courtney saw plenty of new tracks and noted that one of the most unique was “Williams Grove Speedway as it just has a weird shape.”

However, there always are new tracks for World of Outlaw, All Star and USAC touring drivers and there will be more in the future.

What does the future hold for Courtney?