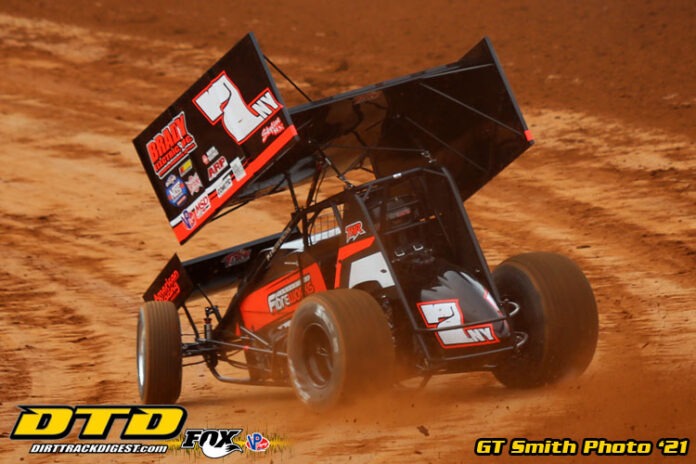 With much of New York shut down last due to COVID-19, some drivers were forced to make changes to their racing programs.

Matt Farnham, known to Western New York fans as a big-block and 358 Modified driver, was was forced to make a move and it was a big one.

Farnham made the jump to the 410 Sprint Cars with his first race coming at Tri-City Raceway Park in Western Pennsylvania competing with the All Stars Circuit of Champions.

And he wasn’t doing that badly.


In the pits at The Dirt Track at Charlotte, Farnham spoke with Dirt Track Digest.

He said, “Last year, with COVID, the tracks in New York State were shut down, but not in Pennsylvania. So we put together a 410 and began to travel. It was crazy running with the World of Outlaws and All Stars. I never thought it was a possibility, but at Tri-City we were fifth overall qualifying and I won a heat. We were right there, but didn’t fare well in the feature.”

Former asphalt Modified drivers Trey Hoddick and Carl Hehr own the team and Farnham is appreciative of their support.

Of 410 racing he is excited and noted, “This is just crazy. Not many people get to do this and to line up alongside Kasey Kahne, Donny Schatz and others is just amazing.”

It is a challenge as he explained, “We need to build on our experience. We are racing guys who have a full notebook and we are just starting to put ours together. Every step of the way is a learning experience.”

At Charlotte on night one he said, “It is fast and big. The best are here and it is totally different from the majority of tracks I’ve seen. There is absolutely nothing like this in New York.”

He timed in 15th in his group and finished eighth in the 13 car third heat, ran the B-Main and finished ninth.

Matt wasn’t disheartened saying, “There were a lot of good guys in the B. I lined up alongside Shane Stewart and Jacob Allen, Sheldon Haudenschild and Parker Price-Miller along with Danny Dietrich were all in that race. I felt pretty good and hope to do better today.”

The future will be interesting for the 7m team as Matt said, “We’ll run big-blocks. We will run 360’s and 410’s, but one thing for sure is I am going to cross Knoxville off my list next year. I might go out for the 360’s, but I want to go there and I will next year.”