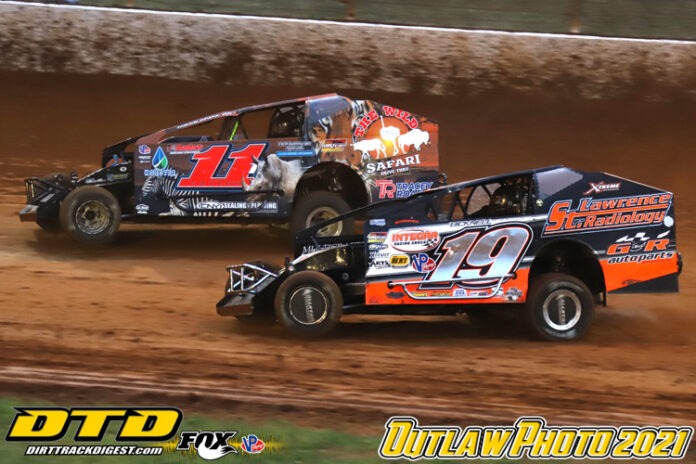 Tim Fuller may have had the drive of the night.  The Edwards, N.Y., driver drove his way from the 18th starting position into the top five before settling for a sixth place effort.  It was a nice recovery from a poor start to the night.

“It worked out,” commented Fuller.  “I’m happier than hell coming from 18th.”

Fuller made changes after his qualifying action was lackluster.  He went back to something he was far more comfortable with and that made all the difference.

“After time trials I made all the changes,” said Fuller.  “I changed all the loads back to racing up north.  I said screw it, I felt like shit out there.  I took out everything that I came here with and put it to what I would normally run Canandaigua with.  I think that was way better.  I put a different right rear tire on for the feature and it felt pretty good.”


Fuller is traditionally very good at tracks where momentum is key.  Places like Can-Am, Mohawk International Raceway and the Dirt Track at Charlotte fit his style.

“It’s a momentum race track and I do like places like this, but you can’t start back that far,” mentioned Fuller.  “I think I could have kept going and maybe got to third or fourth if we didn’t have that caution.  That one caution screwed me.”

When that caution came out he was looking to move into the top four.  On the restart he found himself in the wrong lane coming to the green.  He got shuffled back and couldn’t recover.

“I had to restart on the bottom,” mentioned Fuller.  “For some reason, there was more traction in the middle of the race track than on the bottom or the top.  I think that hurt me a little bit.  I chunked up a right tire too, but it was still good to get where I got.”

Fuller will be back at it Saturday night in the finale hoping for a hand full of spots improvement.